After using my Adana Eight Five largely unchanged from the way it arrived on my doorstep, I decided it was time to see about making some adjustments to the press bed to get more even printing. I followed the instructions in the owner’s manual:

Your machine was fully tested before despatch, but should adjustments be needed to even the pressure, or to adjust for a lighter or heavier forme, this is done by the four impression screws. After making a number of such adjustments it may be necessary to square up the type bed. Slacken off all impression screws and renew the padding. A test forme should be set by placing four large pieces of type (24 point or over) one at each comer of the chase. Ink up and print as normal, but hold the handle down on its stops. With the other hand tighten the impression screws until they are touching the bed to the same degree, and the four corners print with the same density. This is not dilïicult to do if you work slowly. Tighten each impression screw a small amount at a time and then tighten the next in sequence.

The effect of doing this adjustment was dramatic: when I started the top two 24 point boxes I used were printed about 50% and the bottom two didn’t print at all. After 15 minutes of adjustement I had nice, clear impressions from all four.

With the press adjusted I decided to try printing the first sentence of Anne of Green Gables to see what the effect would be on a real job. Again, the improvement was rather dramatic: prints I made yesterday were faded and incompletely printed in many places; here’s what the print I made today (on HazelTree straw paper) looked like: 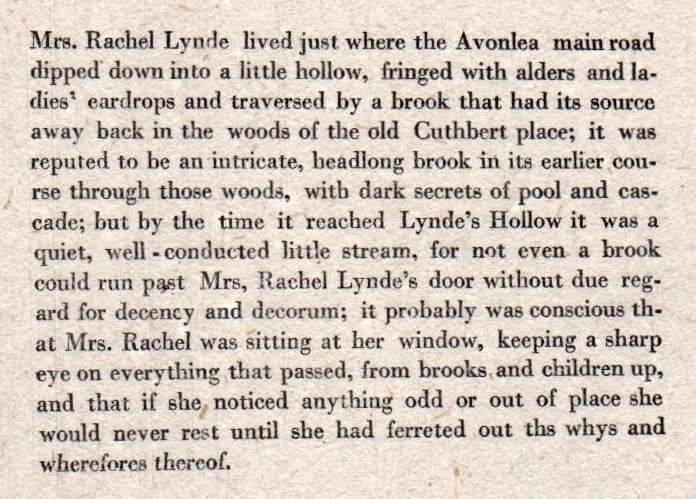 It still needs some work, but at least the work is the same across the breadth of the type. Of course being clear enough to read points out some glaring issues with the setting of the type itself: hyphenating that for example, or adding spaces around the hyphens in well-conducted.  Oh, and there’s that ths in the second-last line that needs its ‘s’ swapped out for an ‘e’. I’ll have to work on those.

But it’s certainly getting better; here’s a print on the same paper that I took before the entire sentence was set and before I adjusted the press:

I’m getting close enough to “real printed text” that I can see the end.