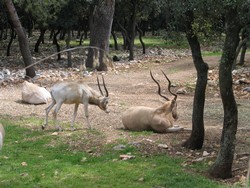 As a result, I know a lot of animals only by their Spanish, French or Croatian names. Animals like the addax (pictured here). What the heck is an addax, and why don’t we have them in Canada?

The French seem wild-animal crazy. Every since we left Paris a week and a half ago, Oliver’s been spotting giant billboards for this zoo or that safari park. Orléans was overrun by what must be the single most effective publicity campaign I’ve ever seen, with posters for the ZooParc de Beauval on almost every billboard, shop window and bus shelter in the city.

As a result of this effective publicity, Oliver decided from the get-go that his number one desire in France was to “go jungle.”

While we had managed his desire somewhat, by Friday we could no longer resist, and so to the jungle we went.

First, it was free.

In the era of super-zoos with heated biodomes and IMAX theatres that charge $50 for a family, this was remarkable. One pleasant side-effect of this was that, in addition to zoo-goers proper, the zoo was also home to joggers, people on their lunch hour and other casual users of the space you don’t see in other zoos.

The Parc Lunaret is very, very spread out, and as a result feels strangely “unzoolike” and more like a large park that happens to house addax and lions and endangered otters. The entire complex is forested, and this forest is criss-crossed with a variety of “tours” of differing lengths that take one through a one group of animals or another. 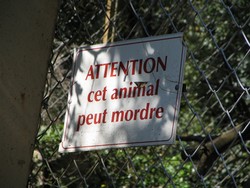 Animals at the zoo were generally “moated” rather than caged, with a deep stonewalled pit between animal and person rather than a metal cage. There were exceptions to this for the more deadly animals: the lions and cougars and wolves were in bona fide cages, cages with signs saying things like “Attention: This Animal Can Murder You” plastered on them.

Animals aside, one of the more delightful aspects of the visit was being deep inside groups of young French preschoolers during their tour. Given that my French language is at about a preschool level, I could actually understand most of what they were saying, and being surrounded made for a very lyrical cacophony.

Oliver said his favourite animals were the camel and the butterflies — butterflies we spied flying freely through the park on our way to the car.

For me, it was the addax; such a stately mysterious beast.

That sounds like a fun zoo. Just FYI the verb “mordre” does not mean “to murder”, but rather “to bite”, which seems to make a bit more sense, non? Say hello the the addices!