January 1, 2019 saw Prince Edward Island receive a 20 cm dumping of snow and, later in the day, an increase in the wind; as a result, many of the scheduled New Year’s Levees were cancelled, especially later ones.

The irony, for me, was that I was kept so busy updating the levee schedule web page in the morning that I didn’t manage to make it out to the Lieutenant Governor’s, to City Hall, or to any of the other earlier levees that did go ahead (this was, in part, because I was at home and not in the office, and so I was editing the website with my phone, which is never a quick proposition).

Oliver being both a creature of routine and as fine a student of the levee as me, insisted that the day not be left entirely a bust, so we donned our coats and scarves and hats and gloves, suited up Ethan the Dog, and trudged through the snow to the Haviland Club and to the PEI Regiment, both of which were satisfyingly bustling.

Keen observers will be able to identify more than one person in this photo I took from the balcony looking down (look for an outcropping of Green Party adherents, and at least one Pendergast and one Leo Cheverie). 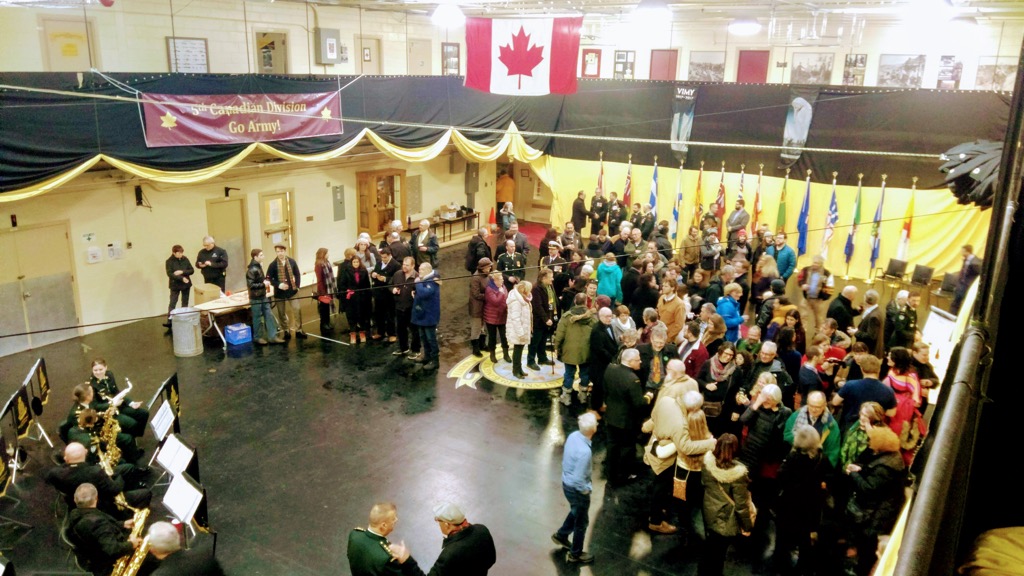 The Prince Edward Island Regiment Band was as crack as it’s ever been (did you know that “musician” is a recognized trade in the Canadian military? I didn’t), the conviviality was strong, and the museum–always opened for the levee–was as interesting as ever.

Thank you again as always for your Levee Schedule and I would like to add additional thanks for all your hard work at updating the revised schedule due to the inclement weather - Like many other regular levee attendees, I appreciate your efforts and wish you and Catherine and Oliver and Ethan a very Happy New Year !