While our trip to Europe over the last few weeks had many purposes – vacation, education, family history research – the real reason for the trip, at least for me, was an excuse to visit Tipoteca Italiana, in Cornuda, Italy, a “Museo del Carattere e della Tipografia,”  or “typeface and printing museum.”

Ever since I’d first read of Tipoteca, it seemed to me that it might be the greatest place on earth, at least from a letterpress perspective, and I’d been quietly plotting a way of getting there ever since. I was not disappointed.

How to get to Tipoteca

From our home base, an apartment in Venice, Oliver and I set off early one morning two weeks ago – as it happened, a particularly wet morning in Venice – for the train to Cornuda. The Trenitalia website was very useful in helping me find a direct train from Venice: train no. 11106 leaves Venice at 7:44 and arrives in Cornuda at 8:57 without a need to change trains. We bought tickets from the machines in the station (easy, and in English; helpful to have coins) and hopped on the train with plenty of time to spare.

From the station in Cornuda it’s a quick 20 minute walk to Tipoteca: just walk south – back the way the train came – until the main road, a T-junction, and turn left and walk through the commercial/residential area until you come to the Via Canapificio, just before the road crosses the canal. Turn right, and you’ll find Tipoteca about 200 metres along the road on your left.

We arrived to find several gaggles of middle school students ready to start their tours of the museum and hand-on time in the workshops, but the museum’s director, Sandro Berra, helpfully took time away from the students to welcome us, get us oriented, and lay out a suggested program for our visit.

The Tipoteca “Hands On” Philosophy

If you are a typophile and are interested in letterpress printing and its past, present and future, Tipoteca is like a visit to a sort of printing Graceland: type and presses of the letterpress era are its sole focus, and they have an amazing collection of both.

What’s more, you’re allowed to touch everything. I can’t stress enough how absolutely amazing this aspect of Tipoteca is: there are no museum-style “velvet ropes” protecting the equipment. You can climb right underneath the Linotype machines, turn the flywheel on all the presses, open all the drawers of type and pick it all up and feel it.

This equipment, after all, was built to made to be used over and over and over again: it’s robust enough to be handled, and to truly understand to physicality of printing in the letterpress era demands that the equipment be handled. How else can you understand how a pantograph works, for example, until you’ve had a chance to take one for a ride:

We began our tour of Tipoteca in the Monotype room. The Monotype system for casting metal type involves typing text on a keyboard which makes holes in a paper tape – similar in spirit to the way that computer punch cards worked: 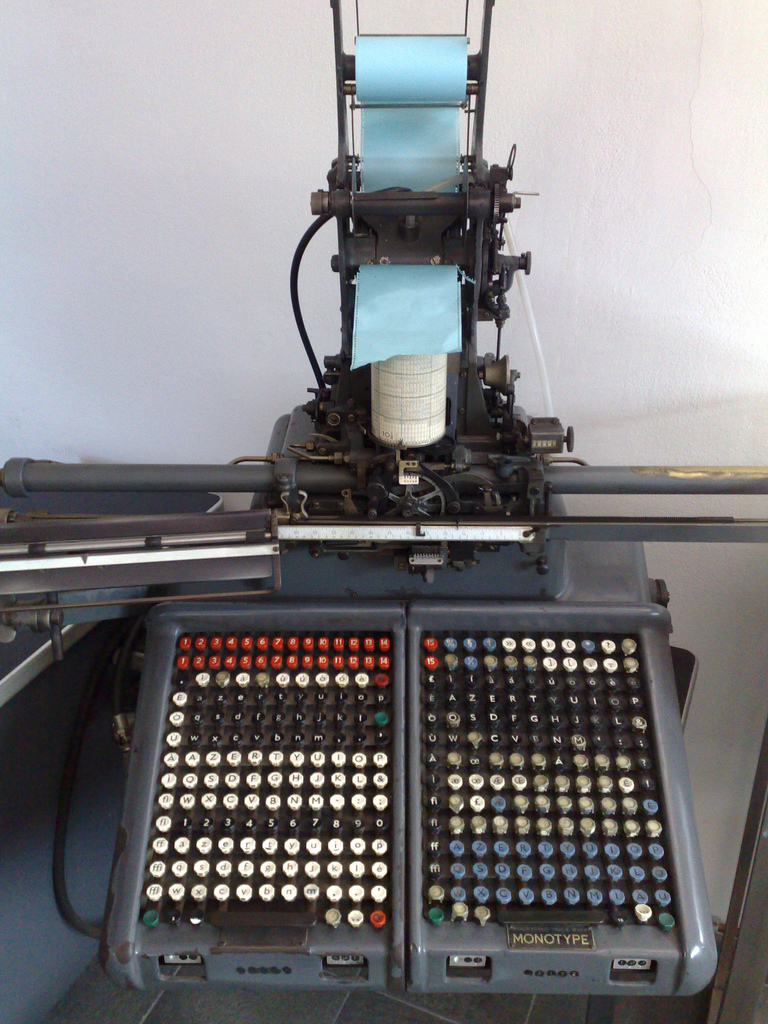 The roll of paper tape is then transferred to a casting machine where it’s mechanically “read” by the machine, and takes molten lead and turns it into justified lines of type: 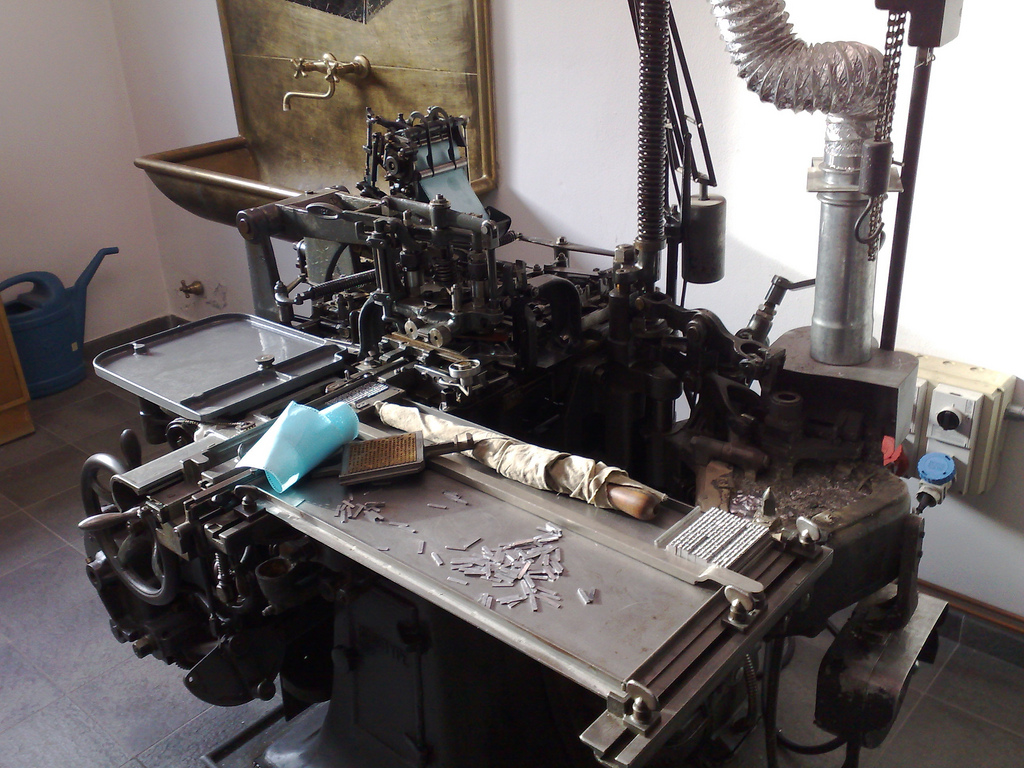 It’s an amazingly complicated system; just changing typefaces requires changing half a dozen parts across two machines. But the result is equally amazing, and what’s interesting about the Monotype system contrasted to the Linotype system is that what a Monotype casting machine spits out is actual moveable metal type – individual cast letters – not solid cast lines of type. This means, among other things, that correcting errors is much easier (you don’t need to re-cast the entire line of type to correct a single error) and also that you can use a Monotype caster to cast fonts of type for hand-setting.

The next room over houses Tipoteca’s extensive collection of Linotype and Ludlow gear. While the Monotype system involves casting justified lines of individual letters, Linotype and Ludlow machines cast solid lines of type. It’s a different approach to the type-casting challenge, and a wildly successful one that transformed printing.

Like Monotype machines, Linotype and Ludlow machines are fantastically complex and to see one in operation puts you in awe of what mechanical technology can be mustered to achieve (I got a chance to see an Intertype machine operating while visiting Don Black Linecasting last spring and shot a short video that gives a taste of this).

Tipoteca has a fine collection of Linotype, Intertype (a “clone”) and Ludlow machines from various generations, like this one: 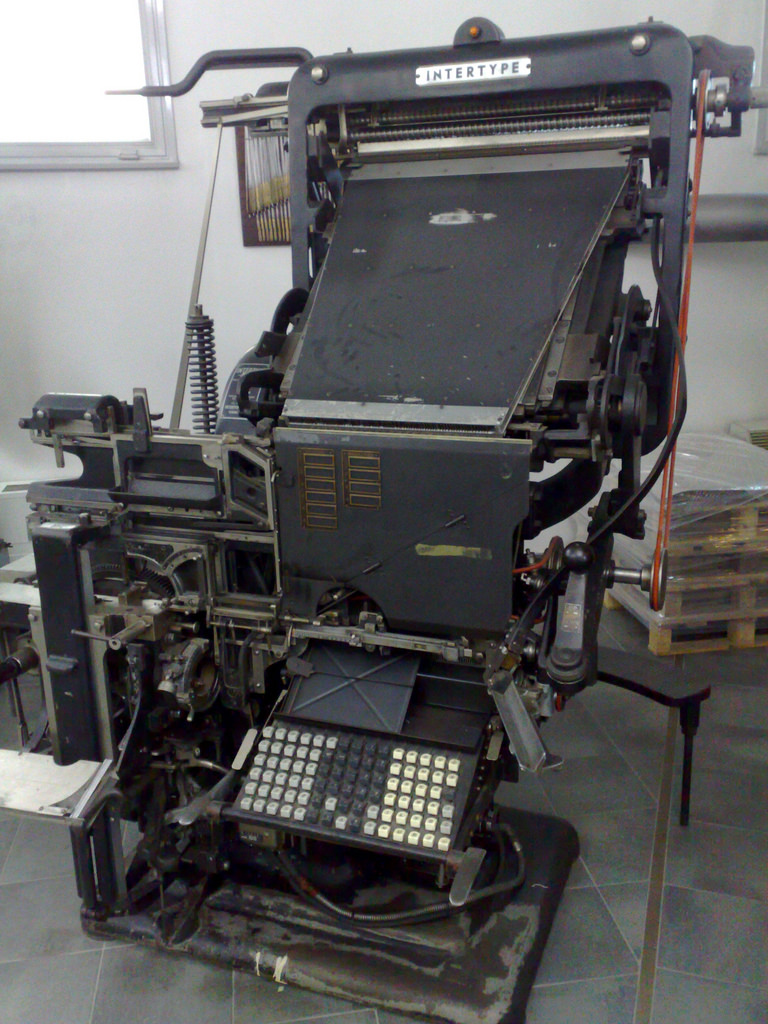 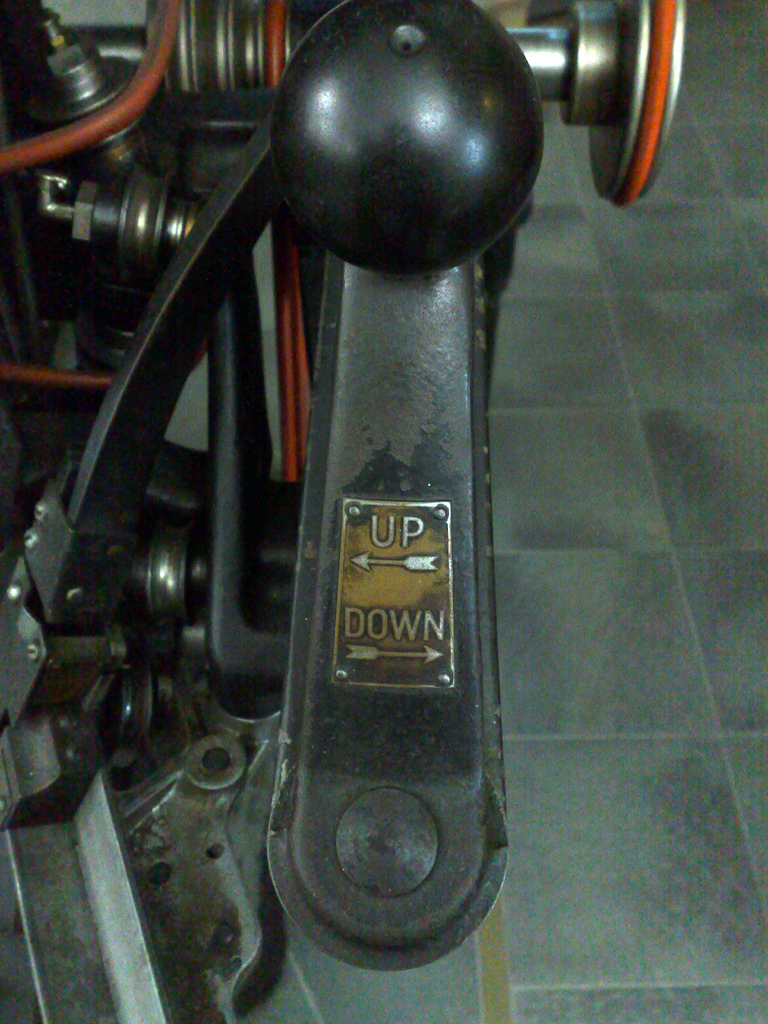 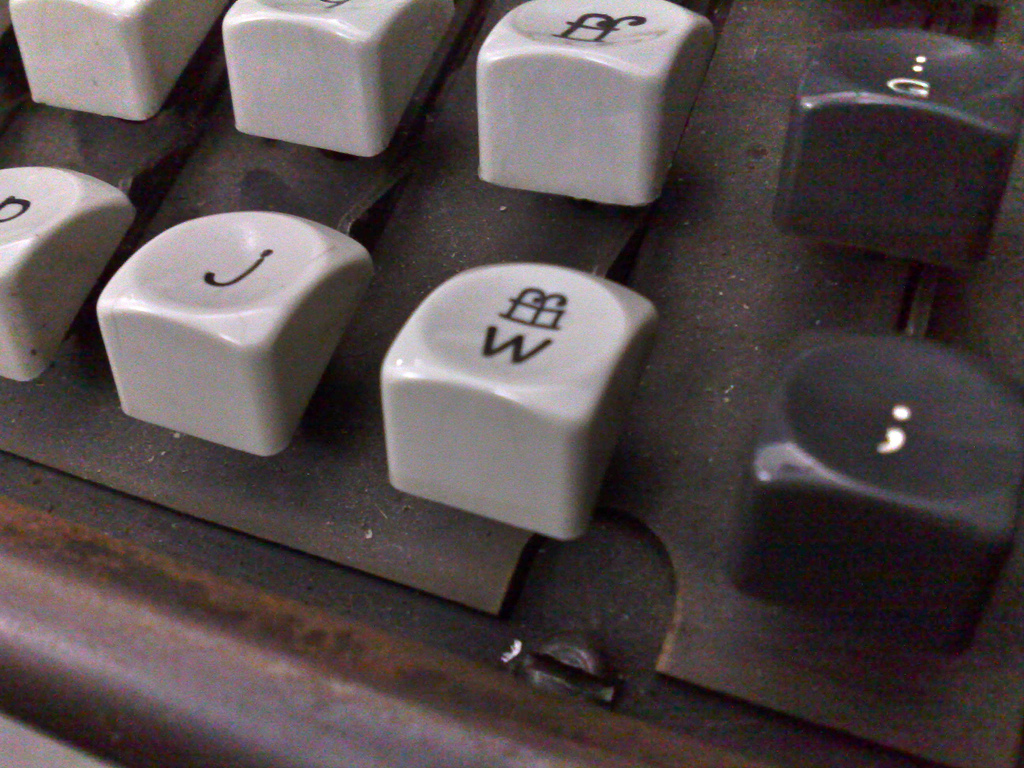 The section of Tipoteca that taught me the most was the small music engraving display, which included all the tools needed to engrave and print sheet music. Although there was a brief period in which sheet music was set with moveable type, by and large, until the digital era, all sheet music was produced by master engravers who, in essence, “carved” the music into lead sheets from which it was then printed, in much the same way as a artistic printmaker would make art. 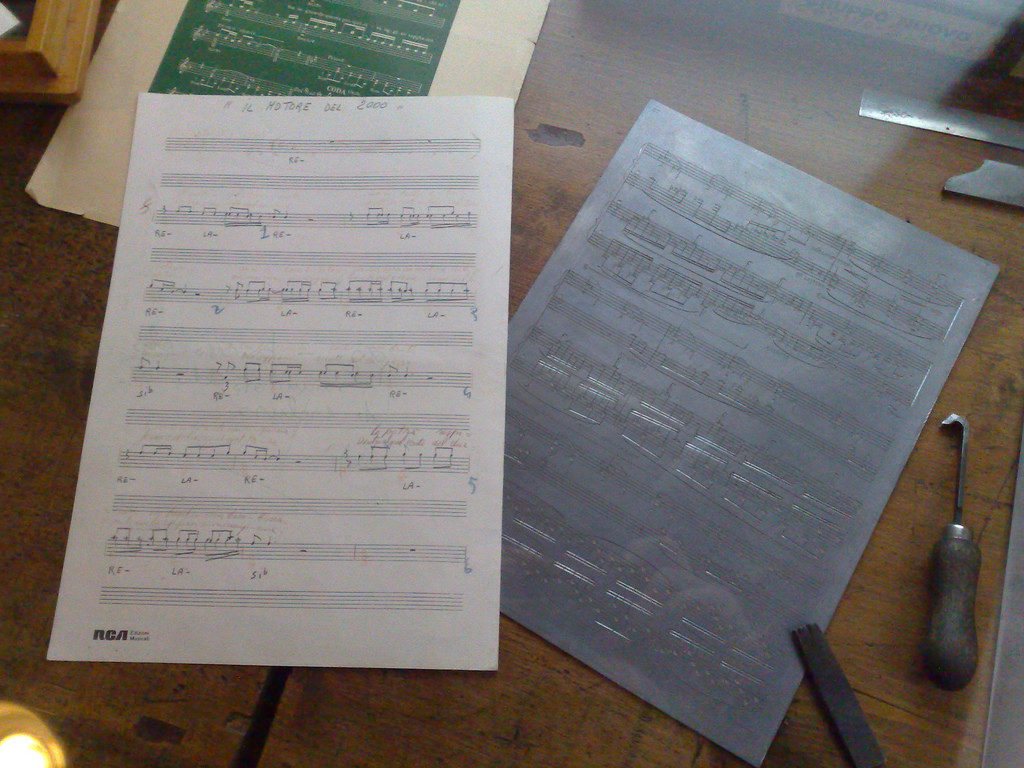 In the small theatre on the second floor of the museum there’s an excellent video that illustrates this process in action and I recommend you watch it to get a complete understanding for what an art this is (this YouTube video is a good introduction too).

The second floor of Tipoteca is devoted entirely to the art of type design and engraving, another area that I knew little about. While this area of the museum is, of necessity given the fragility of the items on view, not “hands on,” the artifacts on display are interesting nonetheless, and do a good job of conveying the path from design to metal. Starting with large hand-drawn masters: 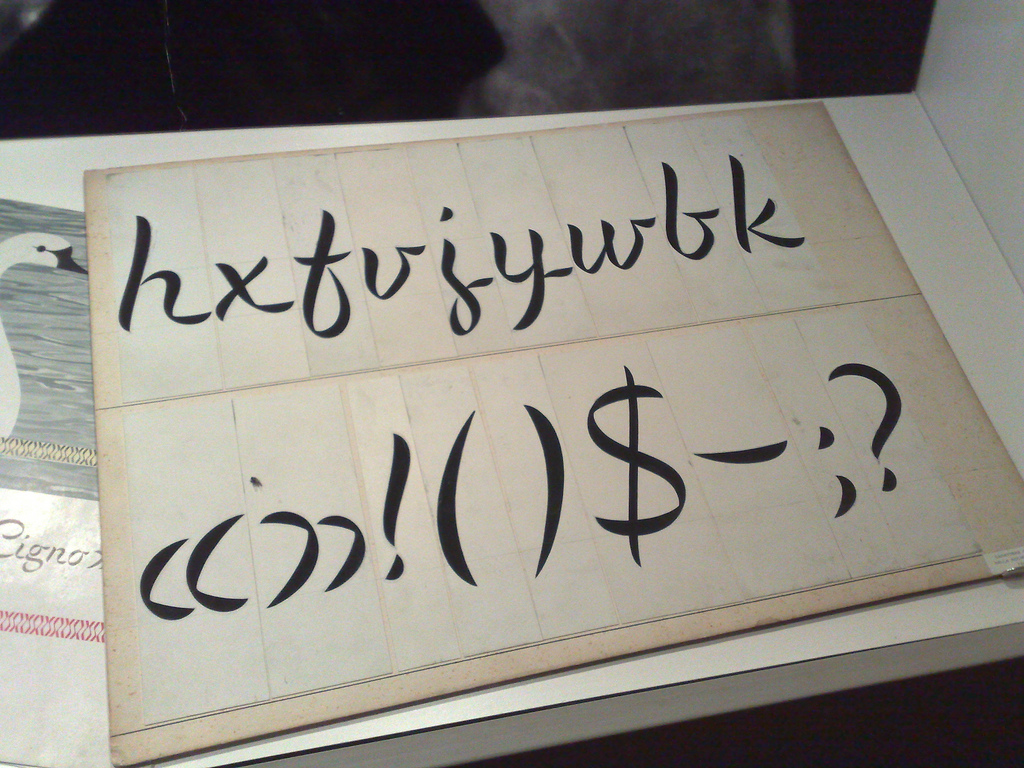 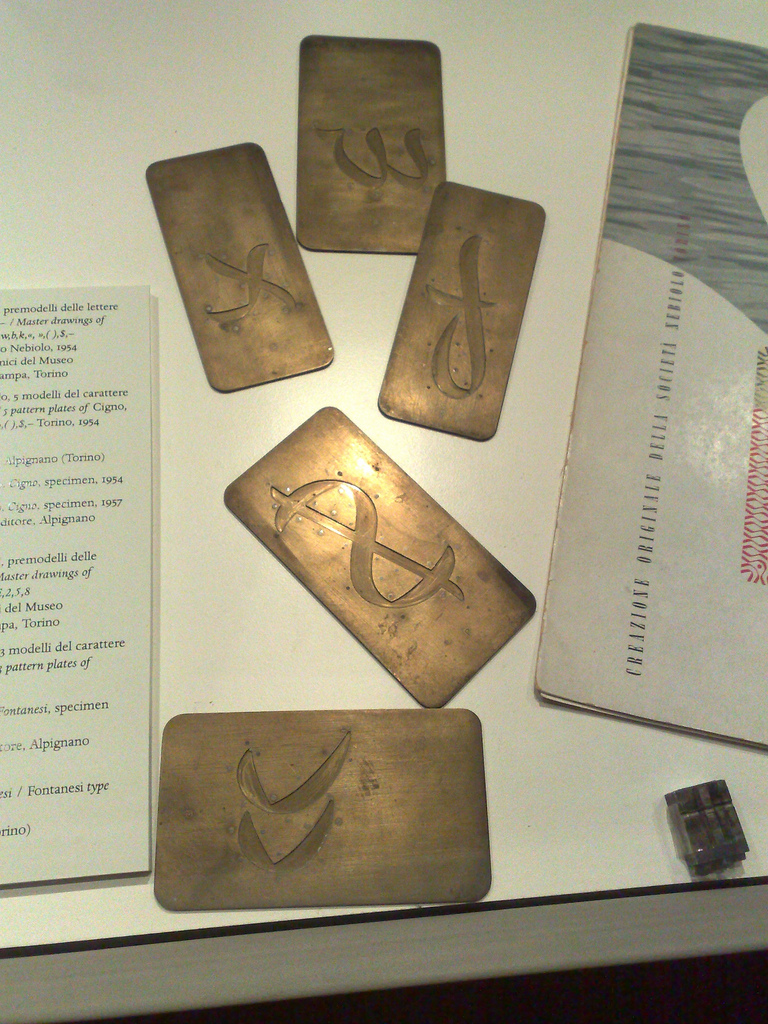 From these masters a pantograph is used to create a punch (which is “positive,” just like the final metal type), from the punch a matrix is created (which is a “mold”) and from the matrix you can cast the actual type. Here’s the three parts of this process side-by-side: 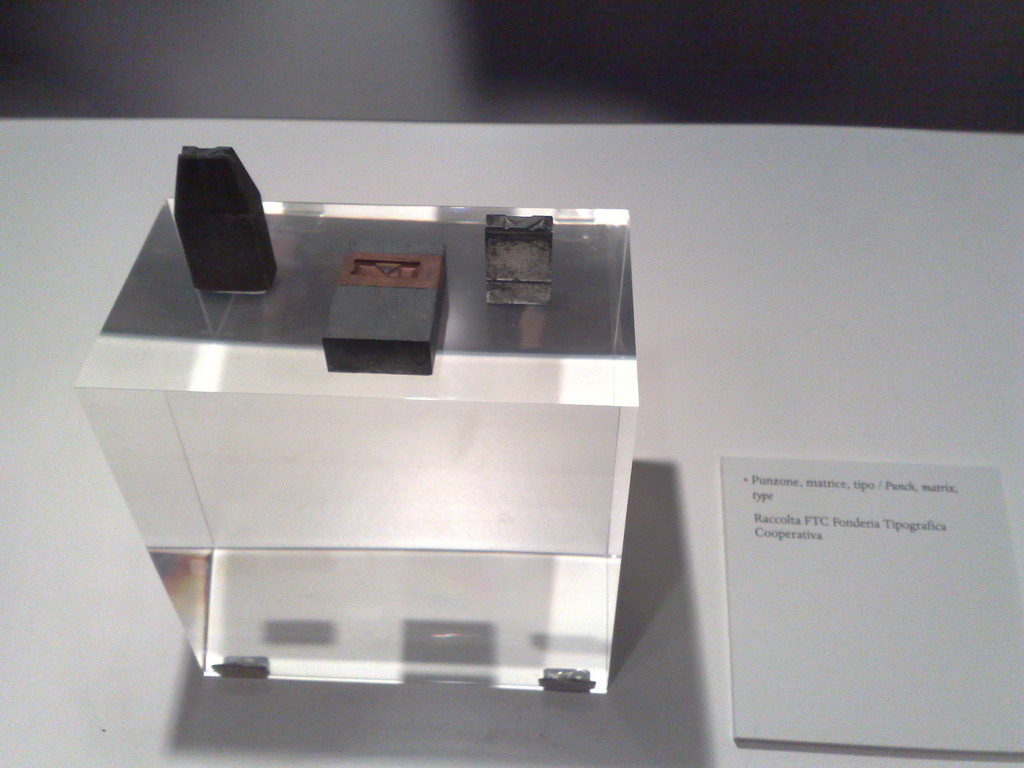 Although they don’t actually call it a “garage,” that’s what this room filled with fully operational letterpresses reminds me of: 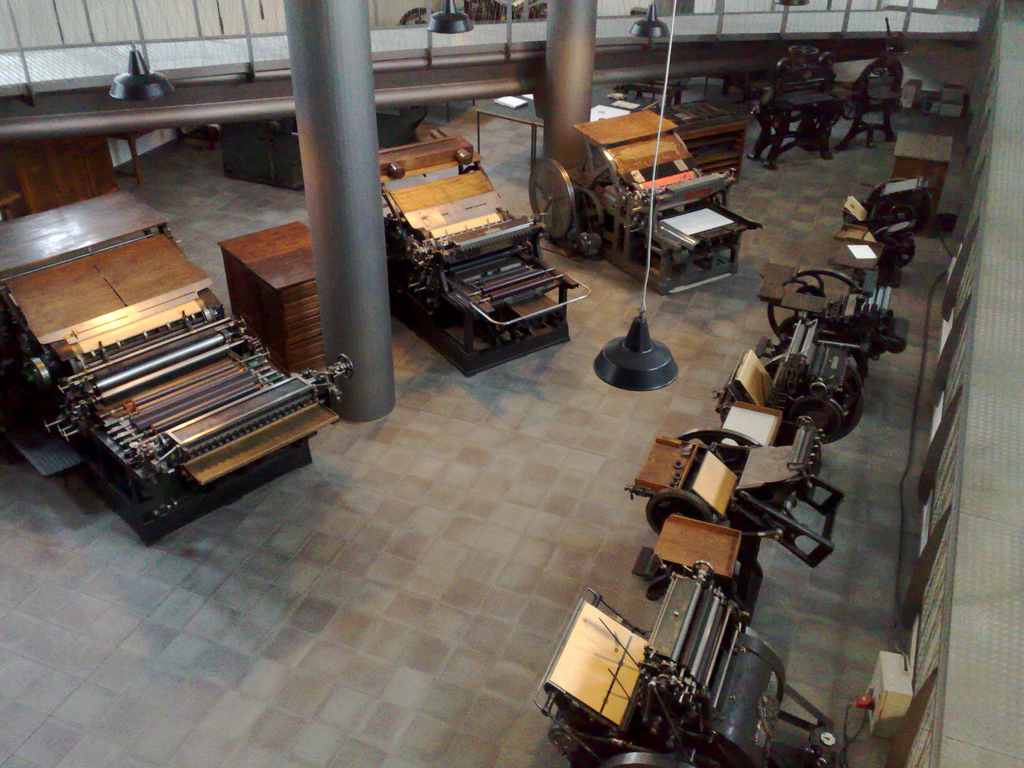 There are examples in the collection of all sorts of presses, from tiny table-top platen presses like the one I have to huge room-filling presses that can produce newspaper-sized prints. There are Gutenberg-era presses and thoroughly modern presses and you can touch them, run them, spin them, and get a real feel for their mechanics. 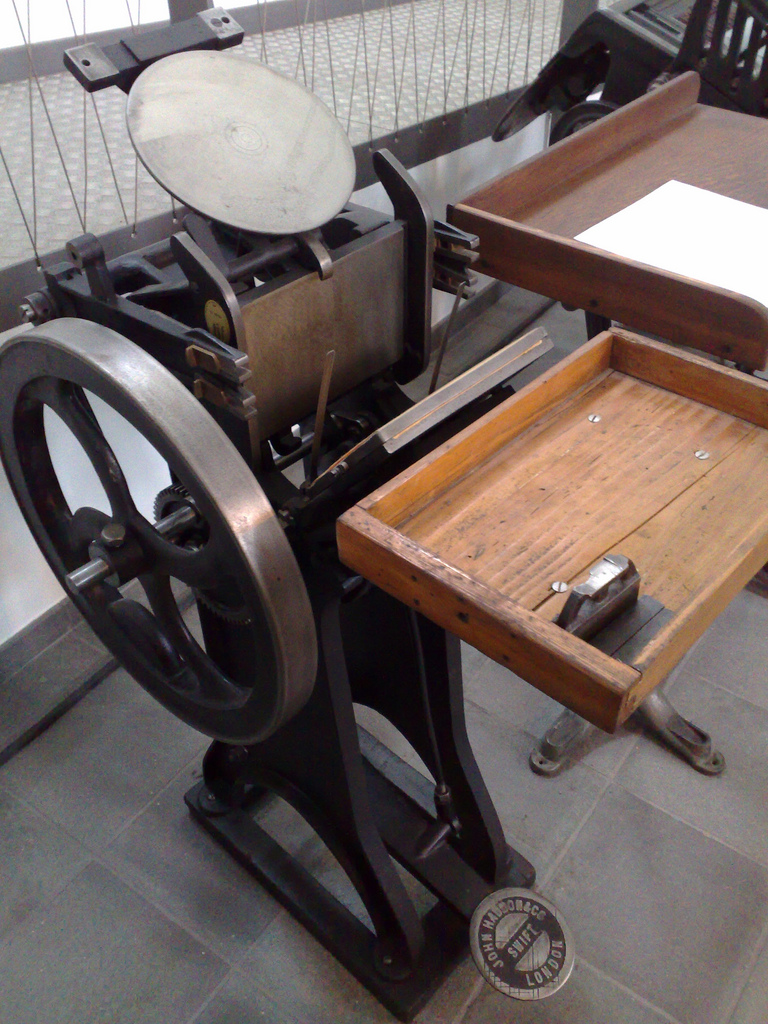 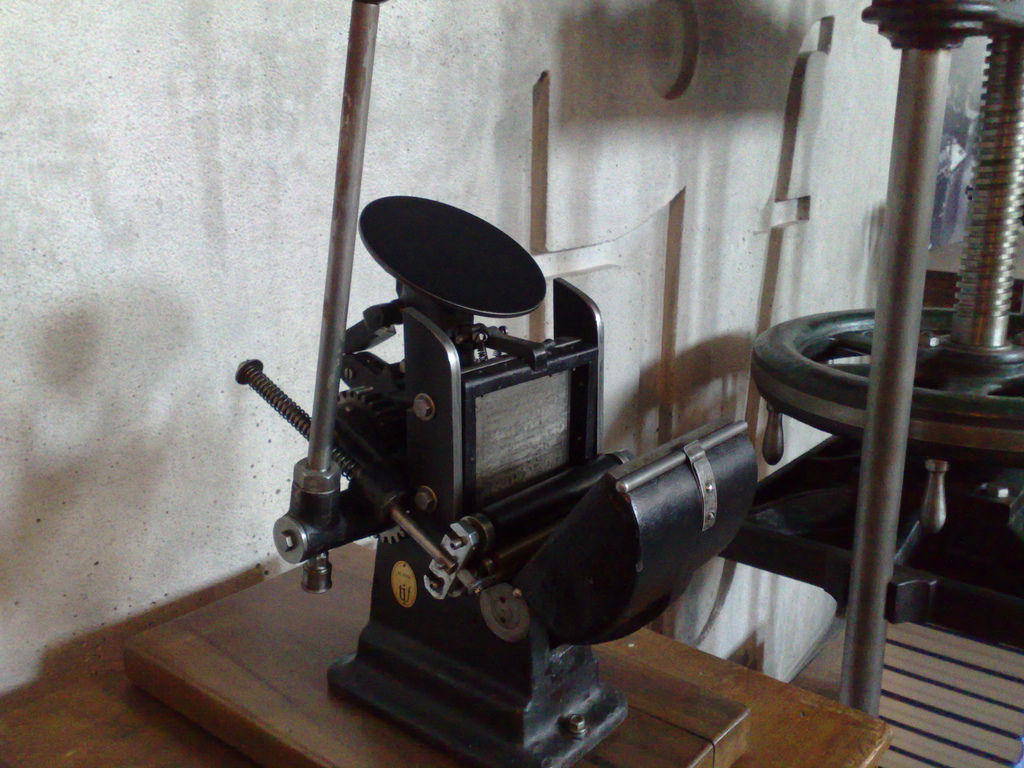 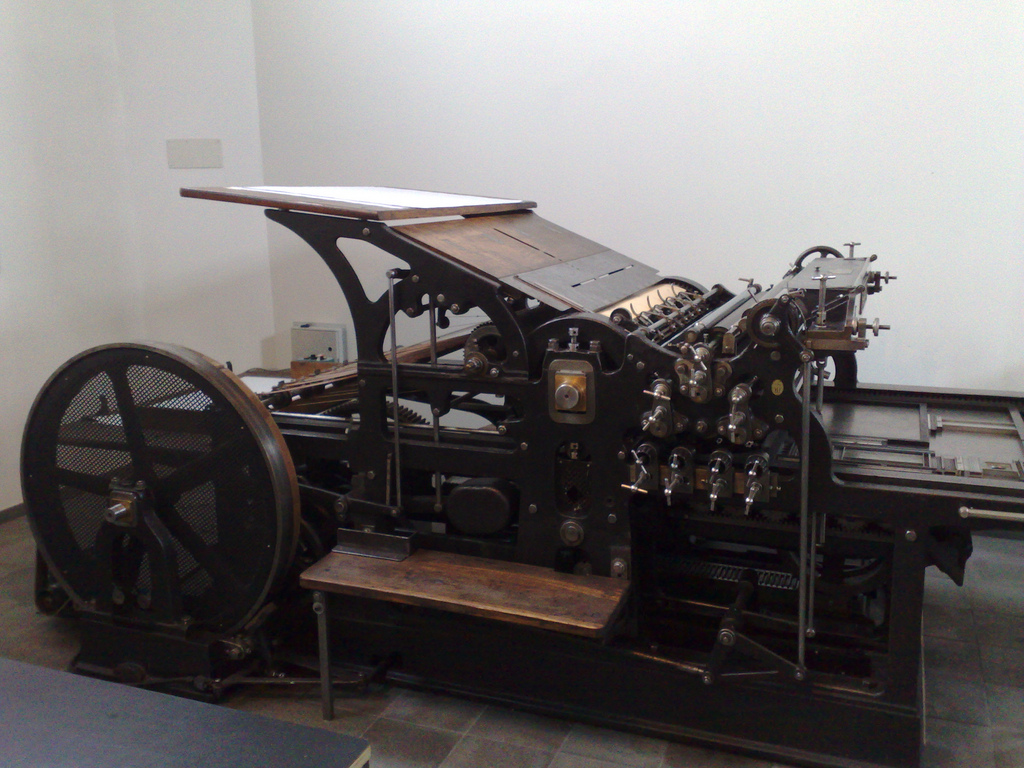 Almost every room of Tipoteca’s building as a wall or two filled with type cabinets, which house their substantial collection of wood and metal type. At the risk of repeating myself, I’ll mention again that the drawers are all open and accessible to the public, meaning that you can do things like this: 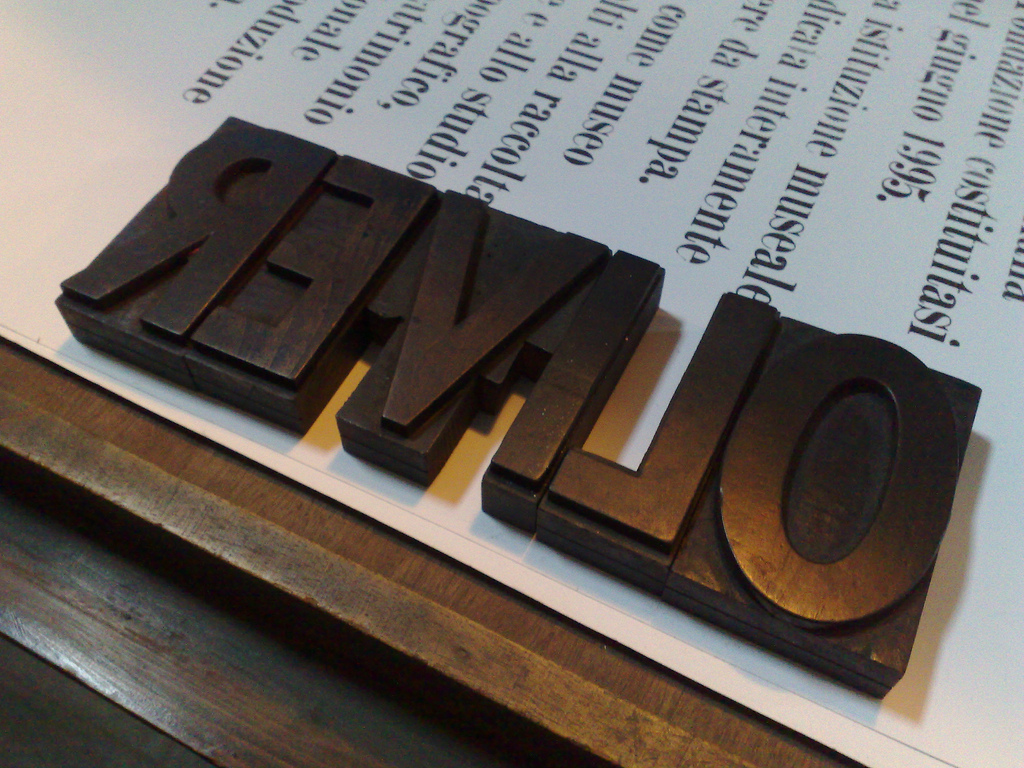 The letter V has been cut into on both sides at some point to aid in kerning it – allowing letters on one side or the other to “tuck underneath” it to allow the letter spacing to appear more natural.

The collection of wood type is particularly impressive, and includes well-organized specimens of a huge range of faces: 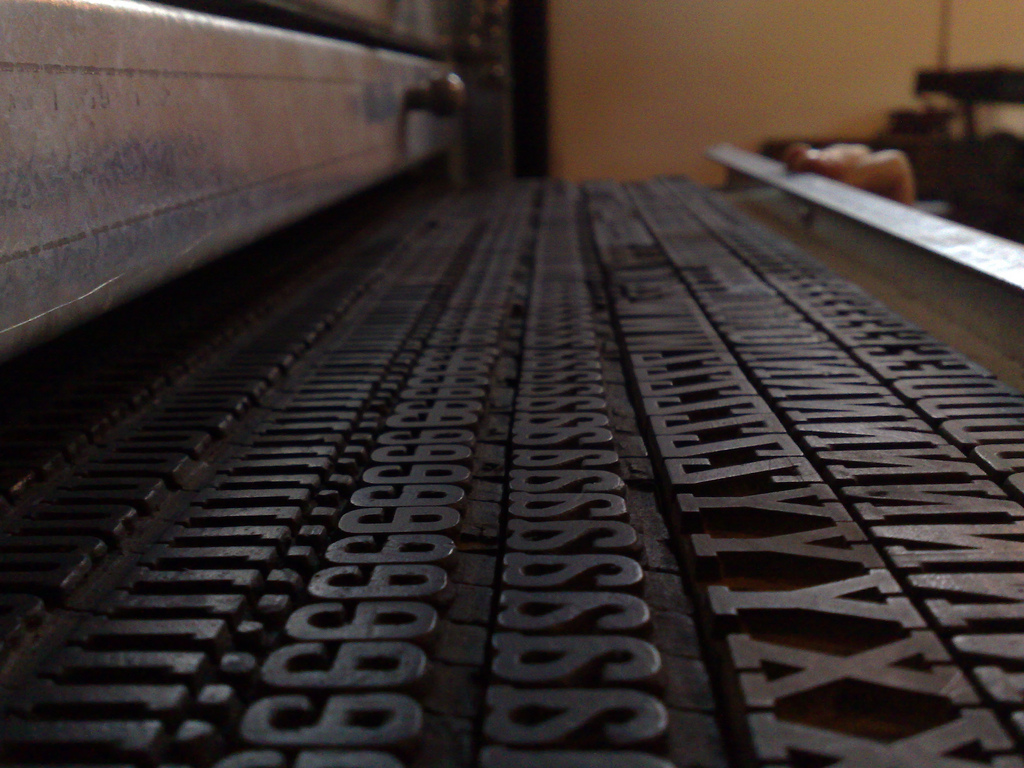 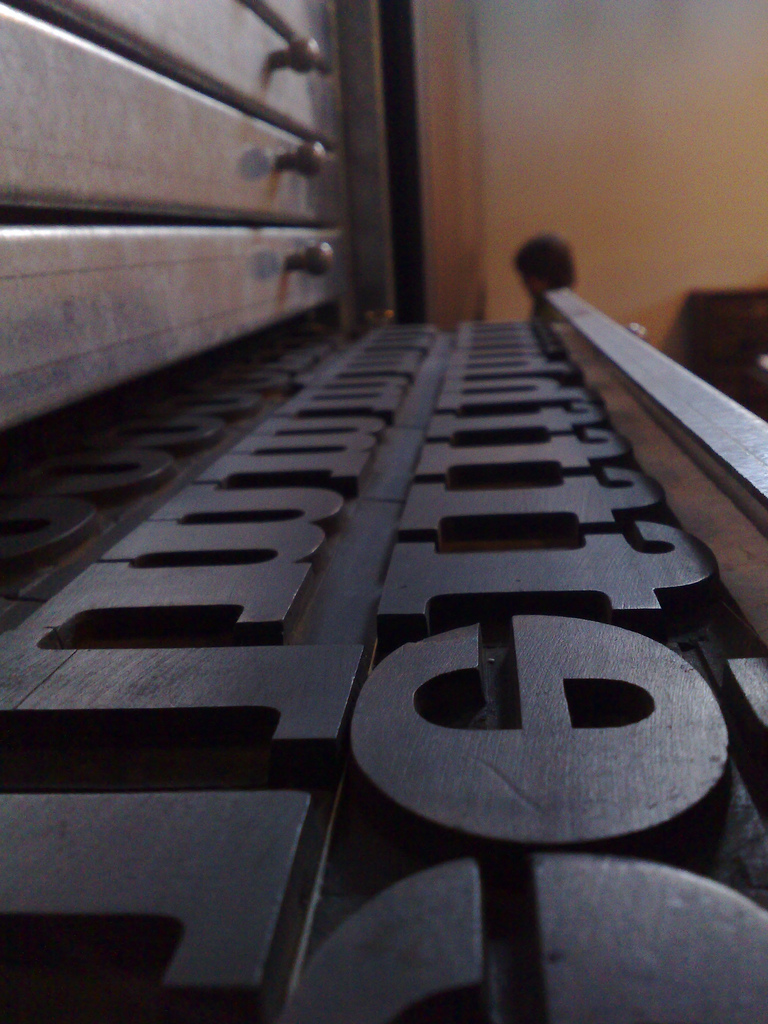 While I loved all of Tipoteca, my absolute favourite part of our visit was the workshop where Oliver and I were lucky enough to get slotted between the visits of two classes of students. 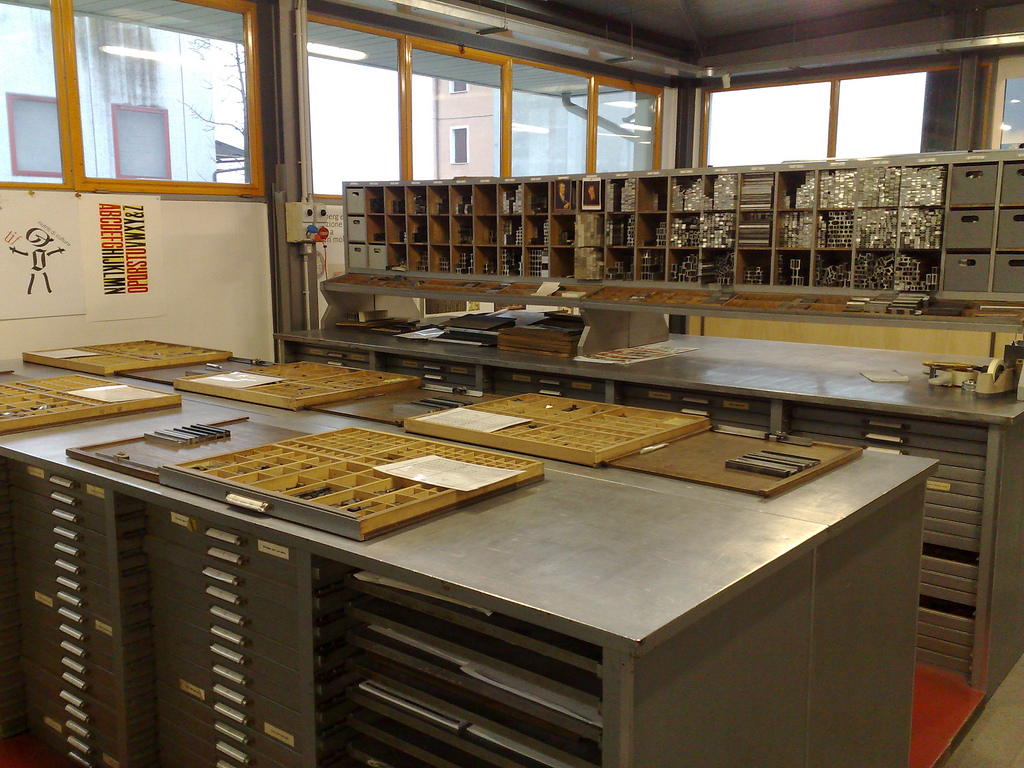 It’s a nice little letterpress shop optimized for school workshops and each student is invited to take a composing stick and a drawer of type and set a two-line quote or phrase which they’re then guided through the process of putting onto a Vandercook proof press for printing onto a blank portion of a comic newspaper produced by Tipoteca about type and printing. Oliver’s quote was:

I came across the ocean to see the world of type. 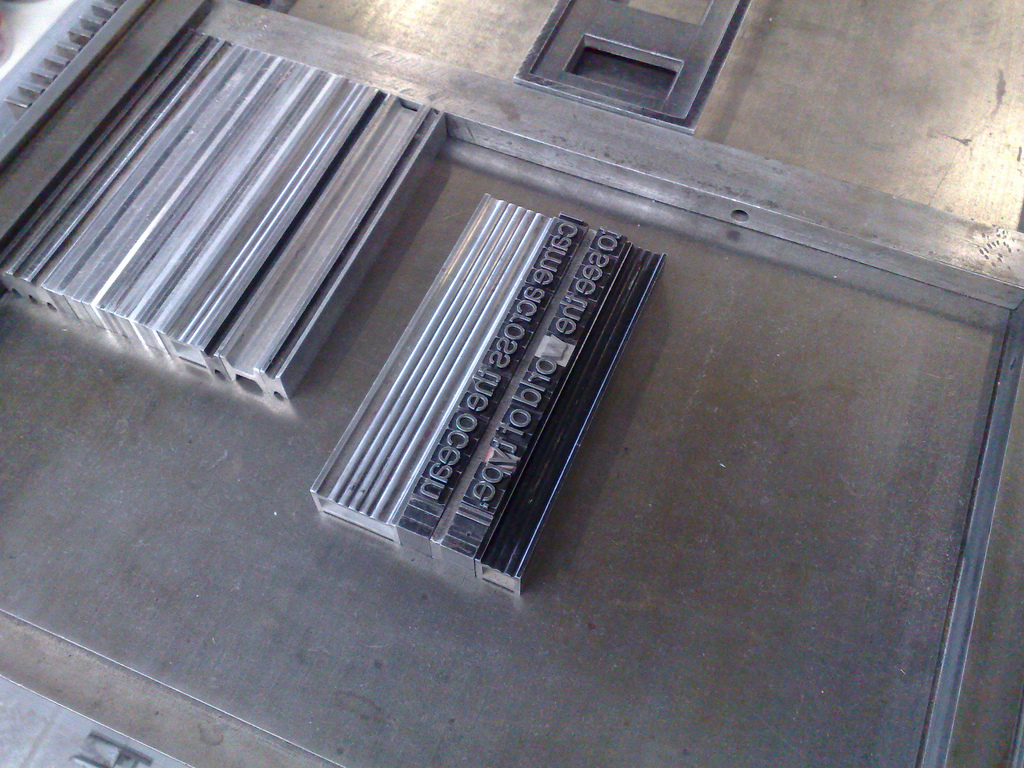 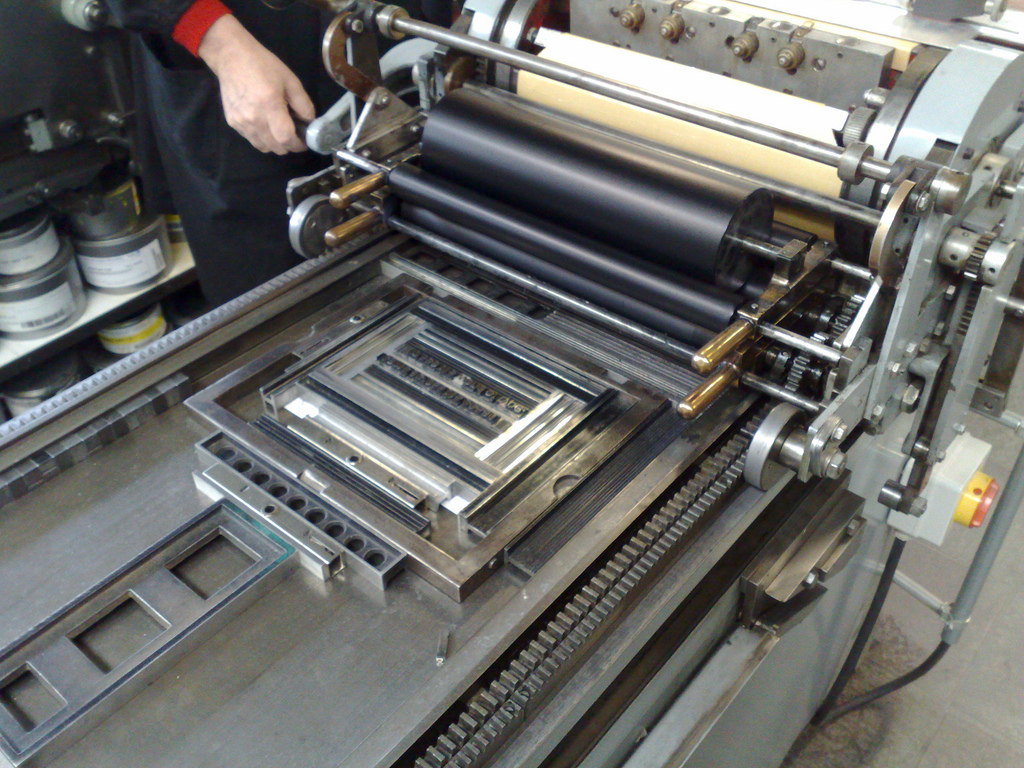 And like this when Oliver was learning how to operate the Vandercook: 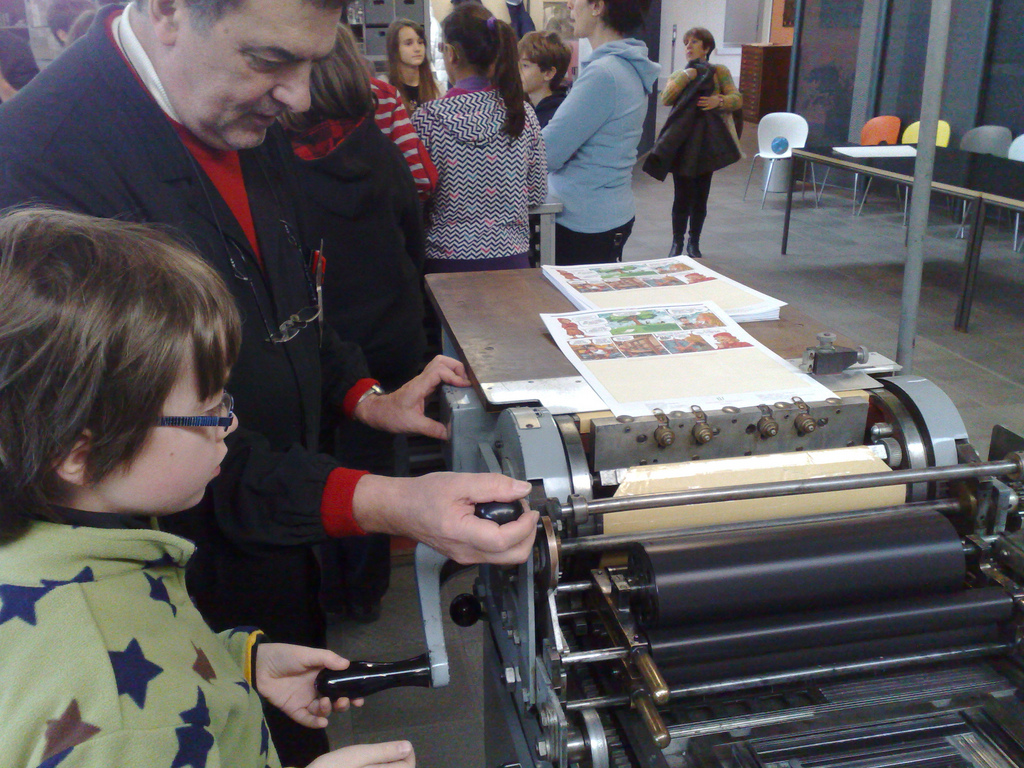 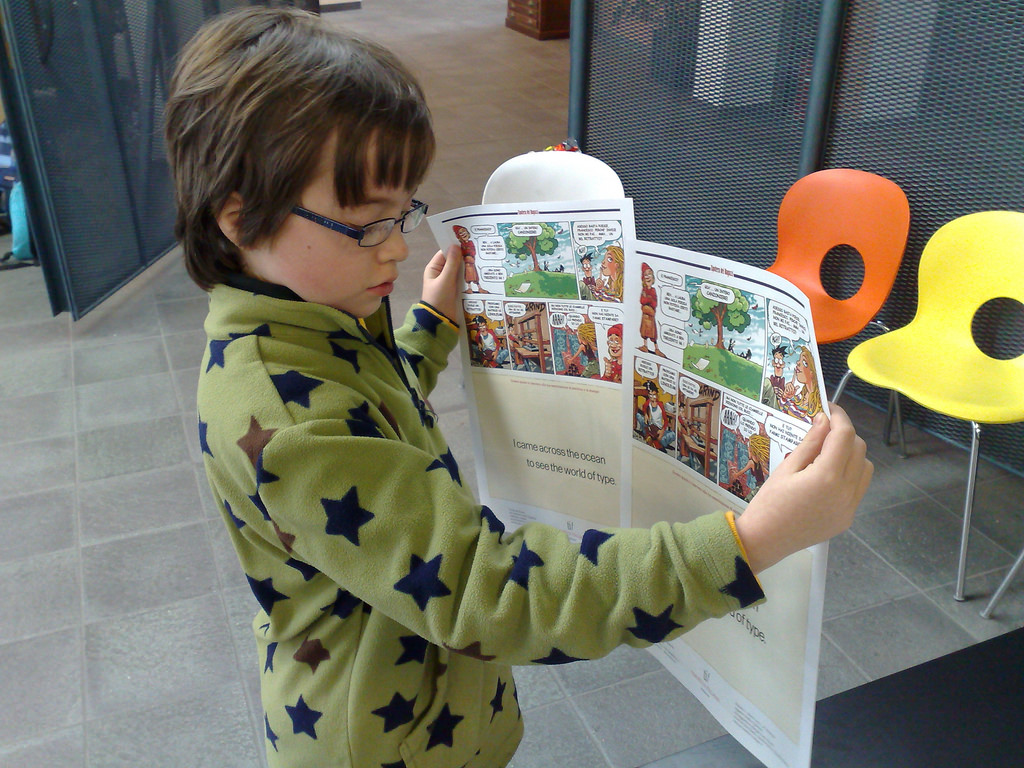 My favourite moment at Tipoteca was when the pressman, who spoke no English, communicated to us the joy of breaking in a lower-case letter “w” for the first time: he pointed at its inkless surface and said “emotion!” and I knew exactly what he was talking about.

With a quick tour of the museum’s library – something that deserves another trip all its own, I think – we were ready to head off and Tipoteca was ready to close for the day. Sandro apologized that he was unable to take us to lunch as he was otherwise engaged, but he offered to drive us to a pizza place up the road and, to boot, to have one of his printers come and pick us up and drive us to the the train station. We accepted his tremendous generosity with thanks, had a fantastic pizza for lunch, and made it to the train back to Venice just in time.

Our visit to Tipoteca was the highlight of our trip for me, and it may be the best museum I’ve ever visited, both for its collection and for its philosophy. I highly recommend you visit if you share my peculiar passions.

Peter, a wonderful, informative and loving look at this precious museum. Thanks so much for sharing your experience.