For a long time my favourite newspaper columnist on Prince Edward Island was Len Russo. I never completely understood where Len came from, or what he did for a living (can you make an income as a weekly columnist on PEI – if so, sign me up!). But boy could he write a column.

I met Len for the first time when he walked into Catherine Hennessey’s old house on Dorchester Street one Saturday afternoon.

I was sitting at the kitchen table talking to Catherine about something or another and Len walked in a started, unbidden, making focaccia (it was very good). And then he left.

From then on I would see Len from time to time in Catherine’s kitchen. But mostly I knew Len from his weekly column in the Eastern Graphic.

And my favourite column of Len’s was the one that appeared in the September 23, 1998 edition of the Graphic, titled All juiced up and ready to go! Publisher Paul MacNeill was kind enough to give me permission to reprint it here:

Not that long ago, PEI was still so removed from the trendy cuisine scene that you couldn’t even find a bell pepper on most rural foodstore shelves.

The leading dish at Island restaurants used to be the hot chicken sandwich swamped with gravy.

Up until the late 1960s it wasn’t unusual I’m told, for teenage girls to go with their moms to the Woolworth’s soda fountain in Charlottetown on a Friday night to order some French fries, and they would thing of this as “a night out.”

As for haute cuisine — there was a dish called the “scallop bubbly bake.”

But the times were a-changin.

One of the pathfinders who led PEI into the age of trendy cuisine was Ted Gamauf of Rustico who came upon an item called the home-made pizza pie somewhere in Maine I think Ted or a friend of his was going to college there.

Ted was so impressed with the homemade pizza pie that he pried the recipe out of the chef, and soon he was opening his own pizzeria in Charlottetown. A new era had begun. The hot chicken sandwich had competition.

Trendy food items were soon popping up on local restaurant menus: things like “garlic breadsticks” and “carrot cake” and a dish called “quiche” which people at first had more trouble pronouncing than eating. (A fellow arrived at a restaurant one time and he told the waitress to bring him some of that there kwitch. He meant quiche.)

Yes, the times were a-changin’.

Today, trendy cuisine can be found across PEI. We have our own culinary school, our own televised cooking lessons with Chef Roger on Thursday nights, our own specialty ice cream, even our own winery. Haute cuisine is available in places from from Fortune to Tyne Valley.

A juice bar opened this summer on Lower Queen Street in Charlottetown. It has just 14 seats and offers pure-blended juices made from a list of fruits and vegetables that reads like an agriculture report from the Caribbean.

It is run by two young people named Wayne and Karen who look as if they just stepped off a surfboard. They are trim and sunny and healthy-looking, not to mention glowing with Vitamin C.

The juice bar is called Just Juicin’. And if you happen to ask Wayne what this juicin’ is all about …beware, the fellow goes evangelical.

As he delivers the pitch, it becomes clear that what we’re talking about here is healthy living.

All right, already! Hallelujah! Pour me some pure­blended juice!

He hands me a cup with a dome-shaped lid and a straw, and I drink the concoction down.

We’ve come a long way from the days of the hot chicken sandwich.

Just Juicin’ has come and gone, of course, and the latest incarnation of the space on Lower Queen Street that it once occupied is the new Zen Sushi restaurant. With that, and the four Taiwanese tea houses, the two Korean restaurants, and the three Asian grocery stores, I doubt Len would recognize today’s Prince Edward Island.

(A side-note about process: I remember the column clearly, but has no notion of when it ran. So I went to the Province of PEI Corporations directory and found that Just Juicin’ was originally registered in 1998. I then went up to the Robertson Library at UPEI at started scrolling through the microfilm of the Eastern Graphic starting in 1998; didn’t take me too long to get to the September 23 issue. I then used their nifty digital microfilm scanner to scan the column, emailed it to myself using GMail and, when I got back to the office, ran the Google Docs OCR machine over it to extract the text) 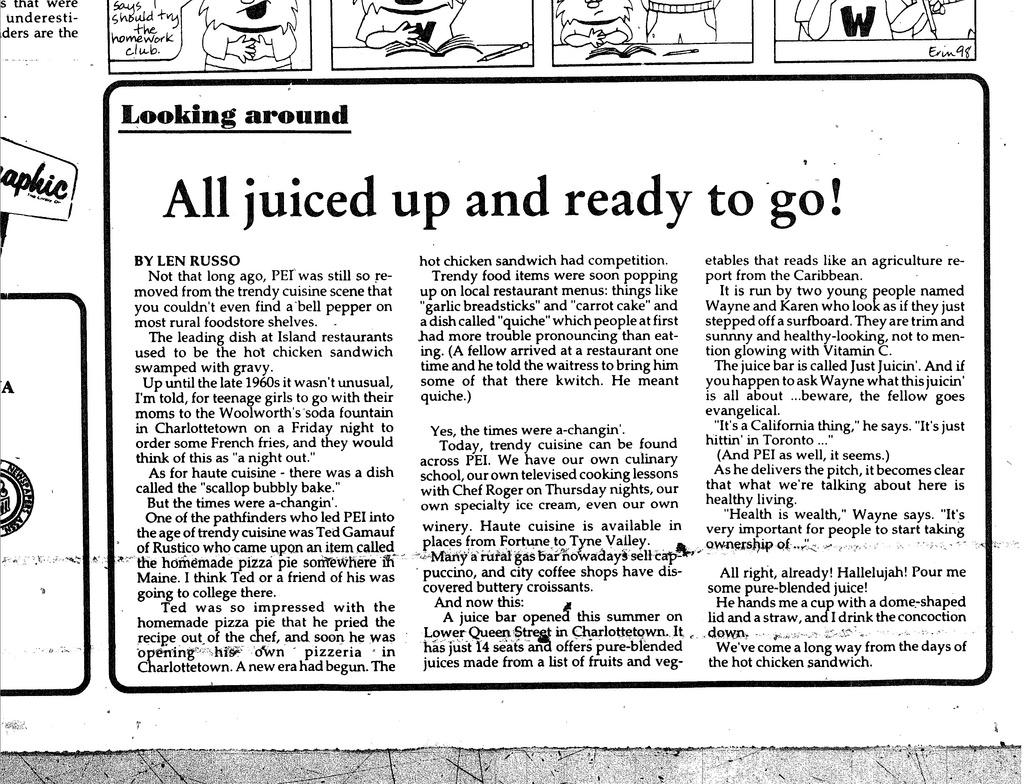 Hey Peter, this is wildly off topic, but you wouldn’t happen to know of any places in town that sell flavored seltzer water, do you? I’ve been looking for the New York Seltzer Water that they sold on PEI for about a year back when I was a kid (killed by the “no cans or un-refundable bottles” law) to no avail. I’ve tried all the Shopper’s and grocery stores in town, and I don’t think we have a Jewish grocer (seltzer is apparently kosher.)

Some sort of flavoured soda water was available at Shoppers Drug Mart on University Avenue in the “Health Food” section at the back last time I was there. You might also try The Root Cellar, either in the Confederation Court Mall or on lower Queen Street.

There is orange and lemon flavoured soda water in the cooler at Timothy’s. It’s not seltzer — its that Italian mineral water — the name of which I have forgotten at the moment.

Excellent, thanks for the suggestions. I’ll check them out this week.