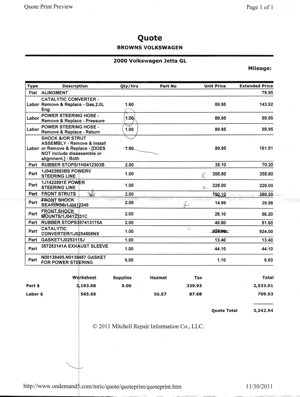 There would come a time in every car’s life when the cost of keeping the car running — and, on Prince Edward Island at least, passing its yearly inspection — would become prohibitive (“good money after bad”) and I’d move on to the next car. Along the way I replaced more than one transmission, many alternators, several starter motors and, courtesy of Catherine’s skills as a metalworker, a parking brake “Y” joint or two.

When Oliver was born in 2000, the combination of “we need a new car so we don’t put the new baby’s life in danger,” having a little spare money, and a desire to get off the yearly treadmill of exorbitant-seeming repair bills, or the prospect thereof, was enough to push us to purchase a brand new 2000 Volkswagen Jetta, and I’ve been driving it ever since.

For the first 2 or 3 years I didn’t need to spend any money on the Jetta at all — regular maintenance was included in the price, and nothing went wrong otherwise. After that I settled into a pattern of needing to replace something — usually some sort of confusing sounding part related to the “check engine” light being on — every couple of years, but some years I’d just replace a pollen filter and be done with it.

This year seems to be the year that things have tipped: 11 years (and only 75,000 km) into the life of the car and so far this year I’ve put about $2000 into it: new brakes, new oil pan, front and rear “control arm bushings” and various other bits and bobs. But that’s not it: now I have a power steering leak, a vibration in the front end (that the bushings and a front wheel alignment was designed to address but didn’t) and a small exhaust leak. The total estimate for these items comes to a whopping $3,242.94 (see the full estimate here).

Perhaps sensing a change in my tone from “okay, well, go ahead” tone to “whoa, Nellie, let me think about that,” the service advisor I saw today when I picked up the car came out in front of the desk and had a sort of counselling session with me in which he talked about various ways of knocking down this price, things like getting a muffler shop to replace the flexible tube where there’s an exhaust leak rather than repairing the otherwise fully-functional catalytic convertor ($924), putting up with the front-end vibration rather than replacing the struts and shocks ($707) and finding less expensive OEM versions of the power-steering hoses ($90 each).

I can’t help feeling that the car has “tipped” now, and that if I keep going this is going to be the start of a yearly subscription that will end up costing me more arms and more legs.

I have two options, as I see it: move from the VW dealer to an independent garage that’s prepared to be more “improvisational” with repairs (perhaps I should have done this years ago?), or just be done with it all, realize that I don’t need a car at all and cut my losses. I walk to work every day. The only regular thing I use my car for is a weekly trip to the Farmer’s Market and I could easily go back to taking the bus there (it was only habit that stopped me from doing that in the first place) and for everything else — the occasional meeting in Summerside or need for a trip to Halifax — I would probably come out ahead renting a car what with the combined yearly expense of insurance, registration, snow removal and repairs.

Anyone else want to chime in?

I walk to work and apart from occasional use like yourself I&#39d happily ditch the car.  I&#39d love it if we had something like ZipCar www.zipcar.com on the Island.

Perhaps the geeks amongst us could devise our own ZipCar system.  I&#39m sure we have the skills.

Like Bob said, I wish the Island had a car share. It&#39s more flexible than the standard rental stuff if you&#39re just going to pick up a bulky item or head to the market or Summerside, and reasonably cheap. I keep thinking Rob Lantz would be another ideal convert but each time I&#39ve mentioned it he has said no. When I move home I&#39d be looking for one… That&#39s approaching critical mass, right?

That said, my 99.5 Jetta (the exact same car as yours, basically) is up to 198,000 kilometres, has a small manifold leak which I&#39ll be getting fixed soon, and nothing else seriously wrong. That could change quickly, however. For what it&#39s worth, I paid much less for it than your current repair bill. I certainly wouldn&#39t recommend purchasing a new car if your use is as low as you say, there are plenty of great cars out there which are 4-5 years old and will last you a while.

We live out of town and still need a car — but had 2. We now rent when I have to go away say to Halifax or when family are here. Fully loaded a car cost about $9k a year — depreciation, gas, insurance maintenance — you can take a lot of cabs and rent a lot of cars for that

If we lived on Prince st, I don&#39t think I would have a car

I&#39ve owned several cars in the last 15 years, most of them have been 10+ years old and cost less than a thousand dollars by the time I got them. If there is one peice of advice I can pass along with regards to maintaining a vehicle cheaply it&#39s AVOID DEALERSHIPS.

OEM parts from the dealership are almost always more expensive then the aftermarket parts from a place like Canadian Tire or NAPA, sometimes several times more. Also, dealerships charge a premium for labour, their mechanics are usually no more qualified than the mechanics at a local shop.

Your car is 11 years old, there are a wide array of after market parts for it and any shop will be able to install them. For the exhaust leak, take it to a muffler shop. They specialize in exhaust work and they will most certainly be cheaper than the dealer.

First, on the recommendation of a friend I did some comparison shopping for the parts on the VW dealer’s estimate and I found parts online were anywhere from 1/5 to 1/2 of the price quoted. The “rubber stoppers” for $35.10? Online for $7.41. I knew that I was being taken to the cleaners somewhat by dealing directly with the dealer, but I had no idea to what extent.

Second, Cousin Sergey (is there no end to his skills?) looked of the requirements and figures that if I ordered the parts he could do all the work for me.

Still debating whether I need a cart at all, but this is at least a way through the short term.

The working idea I’ve had in my head for awhile that would approximate this but be less all-consuming has been to approach a downtown car rental firm — likely Budget or Enterprise — to set up a system that would (a) offer a discount over retail prices for a cooperative occasional rental to a given group of people and (b) make the process as paperwork-free as possible.

Could an alternative be to have the car repaired on the cheap, and stop using it with much regularity to delay the future failure and replacement of parts? If you only used it for a Sunday drive through the back woods or to carry the occaisional large load from Walmart perhaps the cost of ownership would be much lower.

There may be times when you wished you had the independence that car ownership provides.

With regards to setting up car sharing, you may be interested in contacting the Carsharing Co-operative of Edmonton since they seem to operate with a fleet of just two cars. http://www.carshareedmonton.ca…

I&#39d hesitate to buy non-OEM parts I found myself on the Internet, because I believe their liable not to fit—and if you&#39re taking them to a shop I suppose they might be leery of accepting the job, or else they might charge you by the hour for trying to make fit a part they&#39ve no experience making fit, because they&#39ve only installed the OEM or their own favorite non-OEM brand of part. Also about the cost of maintenance, easily swapped-in items like brakes and tires maybe ought to be viewed as consumables you&#39re bound to replace a few times over the life of a car, and so shouldn&#39t figure into a “point of diminishing returns” calculation.

no worries in having someone other than a VW dealership work on your car, but experience taught me that it&#39s critical to use the proper VW replacement parts. I spent one whole winter stalled on the sides of roads all over PEI because my mechanic kept replacing generic spark plug wires with yet another set of generic spark plug wires. Once we finally used the proper VW wires, no more problems. It was a lesson for both of us.

There&#39s a fellow named Hans, who owns the garage in Hampton, who is good with volkswagens.

no worries in having someone other than a VW dealership work on your car, but experience taught me that it&#39s critical to use the proper VW replacement parts. I spent one whole winter stalled on the sides of roads all over PEI because my mechanic kept replacing generic spark plug wires with yet another set of generic spark plug wires. Once we finally used the proper VW wires, no more problems. It was a lesson for both of us.

There&#39s a fellow named Hans, who owns the garage in Hampton, who is good with volkswagens.