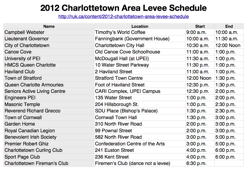 Here’s is the 2012 levee schedule for January 1, 2012 for Charlottetown, Prince Edward Island and area. If you’re new to all of this and want to give it a try, read How to Levee.

Print out this handy PDF file and carry it in your pocket to guide you through the day, and spread the word on Facebook and Twitter.

All levee times have been confirmed by telephone or email contact with organizers, or with information from published sources.

Just out of interest, here’s some Google Analytics data for this post, covering the period from December 12 to 30, 2011:

Thanks for the list as always peter… just to note, the UPEI levee starts at 11am