I’ve been on the board of the L.M. Montgomery Land Trust for several years. We hold our monthly meetings at Ravenwood, on the Experiment Farm in uptown Charlottetown.

Every time a monthly meeting comes up, I take the car into work, and then drive up to the meeting. It’s usually a hassle finding parking, and Charlottetown traffic (such as it is) is pretty heavy around the noon hour, so it’s not a pleasant drive. 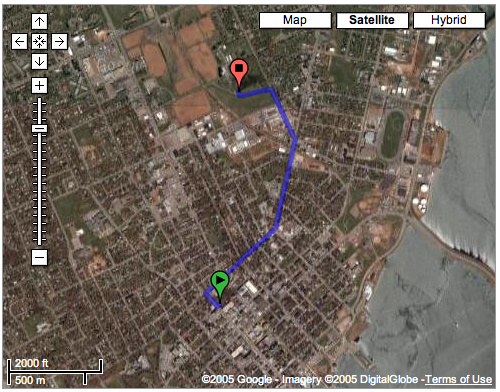 For some reason it dawned on me this morning that I might be able to ride my bike to the meeting instead of driving. While this might be an obvious approach, and one you think would have occurred to me earlier, it’s important to recall that people in Charlottetown drive everywhere.

So although I’ve managed to largely avoid driving the five blocks from home to office every day, the notion of driving out past Allen Street — almost to the K Mart! — simply never seemed possible.

Except that today, it did.

I got there in 8 minutes. Without pedaling very hard.

Although I was somewhat fatigued by the trip — more a reflection of my total lack of fitness than the degree of difficulty — it was generally a pleasant way to get there, and, all things considered, was net positive on time, money and fitness (mine and the planet’s, etc.).

If we set aside the fact that I may simply be an idiot, it seems like I’ve discovered a major barrier to the adoption of alternative (i.e. non-automobile) means of transport: a well-ingrained status quo. Olle rides his bike to work every morning in Copenhagen because that’s what everyone else is doing. I drove my car to meetings for the same reason. How on earth are we ever going to remember to take our wacky new olde buses when they hit the roads this fall, let alone remember that most of our city is within easy walking or biking distance.

Not everyone rides their bike to work, but Copenhagen does have a serious infrastructure for using the bicycle as a means of transportation.

Reiterate: to make the bike a serious contender to personal automotive transportation, we need to treat riding bikes as being in traffic. Follow the rules, people. Makes everyone’s ride easier.

I agree Olle. If there’s anything I can’t stand is people on their bikes riding on the wrong side of the road, or even on the sidewalks. I also understand people
s legitimate fears of riding with the car traffic. It can be intimidating, to say the least. I always tell those who ask about how I cope with riding in car traffic to “act and think like a car”. (even though cars don’t think and act, people do) My point is simply that if you ride with confidence and are aware of the what is around you, it is very possible to get around town without too much difficulty.

Having said that, if only the people driving the cars could “act and think like the people riding the bikes”.

Good going Peter. Anytime you’d like to go over the Hillsboro Bridge on your bike, let me know. (Hey if Rob Paterson can ride from Bunbury and over the bridge to Charlottetown on his bike, anybody can).

Are there any bike lanes in Charlottetown? Montreal has a very aggressive pro-cycling lobby, which has resulted in an excellent network of bike lanes. Alos every spring on a Sunday they hold the “tour de l’ile”, where they open about 50 km of the road network to bikes only, much to the consternation of motorists and the delight of cyclists. Montreal is also gradually replacing some on-the-street parking spots in busy areas with bike racks.

Sadly many cyclists still flaunt rules of the road and regularly run red lights and ride on the sidewalk. But the benefits of a having a realtively bicycle-friendly city far outweigh the bad. The way to get people to ride their bikes is to make it hassle-free for them — bike lanes and plenty of good bike racks are a good start. That’s the kind of thing your city council has to deal with.

One of the odd and, I think, net-negative things about cyclists and motorists in Charlottetown is that motorists tend to treat cyclists like pedestrians. About half the time when I’m waiting at the corner of Fitzroy and University to cross University cars will stop, pedestrian-style, to let me cross. While this is kind, and I appreciate the gesture, it serves ultimately to reinforce the “bicycles don’t really belong on the road” message. And because it’s neither the law nor can you rely on the behaviour, it creates more doubt and confusion at intersections, a space where a commonly accepted set of standards is required for everyone’s safety.

I have been curious about why bicycles are not more often used in Charlottetown — but I never biked when I lived there either and even found being a pedestrian dangerous.

It wasn’t until I visited friends in Amsterdam that I was inspired to buy a bike and use it as my main source of transportation. Now, I bike every day to work in my city.

I was interested to read Cynthia’s comments. Though I try to follow the proper rules of the road and good bike etiquette, I find, like Peter, that many drivers don’t reciprocate and sometimes it can be dangerous to follow car-traffic rules. (I don’t drive a car, so wonder if it’s my own misunderstanding of driving protocols.) But if bicycles became more commonly used, then this might not be as much of a problem.

I wish we had been encouraged to use bikes more when I was younger — it is such a practical, enjoyable (mostly) way to commute and I would take it any day over public transit or commuting in heavy traffic.

Peter, I experience the same doubt and confusion everyday at intersections like Fitzroy and University…as a pedestrian. Nobody follows the rules whether you’re walking, riding or driving. When walking you can never guess if someone is slowing down to let you cross or just scanning for a parking spot. The strange thing in Charlottetown is the tendency for drivers to very willingly stop and let you jaywalk in the middle of any block, yet crosswalks are almost ignored. It’s like people prefer to go out of their way to help you break the rules. And it’s all very polite. It’s not until you use a crosswalk that you’re made to feel like a nuissance to drivers. While driving my car the other day I had an infuriating negotiation with another car facing me across the intersection. I was waiting to turn left, him waiting to turn right (same direction as me, north). He had the right of way but he insisted on waiving me out first, even though there was southbound traffic preventing me from pulling out. He sat there gesturing at me, when he could have just proceeded unimpeded with this right turn leaving me to wait for my all-clear. I felt like screaming “just go!”. This type of polite “no, you first please” disregard for the rules turns simple acts of navigation into unpredictably dangerous leaps of faith.

And for those bikers who think they’re safer on the sidewalk (pedestrians being softer than cars), here’s something to ponder. (It is illegal in PEI anyway, though not enforced)

Yes I agree with all the PEI behaviour problems above — but let’s move on. How could we make biking more acceptable and easier?

Here are a few of my thoughts:

* Structure — Key bike lanes and routes — A Bike lane over the Hillsborough providing easy offf and on access at both ends. Bkie routes — I take Fitzroy into town — one way and low traffic — so this does not mean bkie lanes every where but bike easy routes. More racks
* A Car free centre — before you say this is mad — what about the winter? Whistler has done this with great success
* Incentives — Don’t know how or what — any ideas? Money talks. A friend of Cyn saves about $700 a summer on gas and parking and that was before the increases. Maybe the incentive is to start to define the savings. Must be $1,000 now and that is a lot of dinners, lunchs. It is a mortgage payment or 1/3 of the heating bill. Also when I was cycling more often my new friend (my pot) started to go away. Maybe a Bike Wiki that builds on all theses points plus what to buy etc
* The cool factor — all trends start with pioneers/early adopters and then go to the early majority. How could we get behind such a process — who would have to do what to get each layer going. People like Cyn are the Innovator type maybe you Peter and I the Early adopter (I must do more) but how do we get the Early majority in? I think that you ad I have to do more and talk about the savings. A PEI Bike Wiki?