I’m now 3 weeks into my experiment using a PiAware to track airplanes flying over Prince Edward Island. And I’ve been joined in the effort by my friend Ken, who, fortuitously, lives in Tyne Valley and thus is perfectly positioned to capture overflights that my receiver cannot see. As a result, coverage of all by the most western tip of the Island is very good now, as evidenced by this map that shows three weeks of flights: 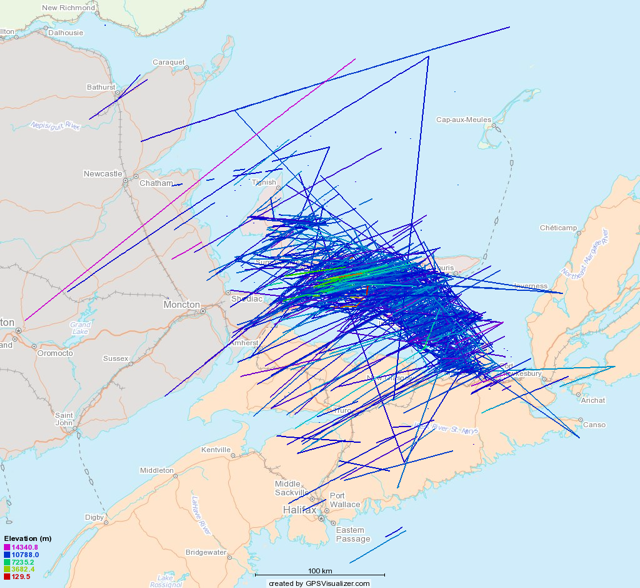 Some statistics about what’s flying over Prince Edward Island:

More than anything else, this project has changed my perception of Prince Edward Island in the world: it’s a lot harder to think of PEI as a remote island disconnected from the global commerce when there are so many airplanes flying directly over our heads every day going to all corners of the earth. Even if they are 14 km above our heads.

What measurement unit does LM stand for?

It means I don’t know how to type km. Thanks. Fixed.

The overall non-correspondence of the two top-five lists shouldn't be surprising, I guess, but it does surprise me a little. I mean, if planes mainly carry passengers, and if passengers go mainly back and forth from their destinations, as opposed to traveling on circular tours, then shouldn't the same five cities appear in both lists? I guess it seems plausible that most itineraries these days take passengers to their destinations via other cities, and they're liable to connect via different cities going and coming. Yet if there are cities with a lot of people traffic directly between them, then New York and Paris make sense as a pair of them, and they do appear on both lists. I guess another confounding possibility is that a lot of these planes could be empty of people and full of boxes...unless you don't see many shipping companies among the operators.

It might, and likely does, just mean that the Eastward and Westward trajectories are different enough that one overflies PEI less than the other (probably due to prevailing winds).

It shows what a communitarian you are, Peter, that all this fly-over makes PEI feel less remote. Couldn't it just be an important navigational marker, which carriers don't mind flying over any more than they mind flying over a rock island inhabited by seagulls?

Thanks for posting this information. I recently moved to PEI from the Fraser Valley/Metro Vancouver area in BC where it's a given that all large planes are coming from--or going to--YVR. I've been wondering about the high altitude planes passing overhead since arriving in PEI. Now I know. :)