Ten years ago today, on June 7, 2005, almost exactly at the time I’m writing this post, I boarded an Air Canada flight to Copenhagen, via Montreal and London.

I was off to attend my first Reboot conference. 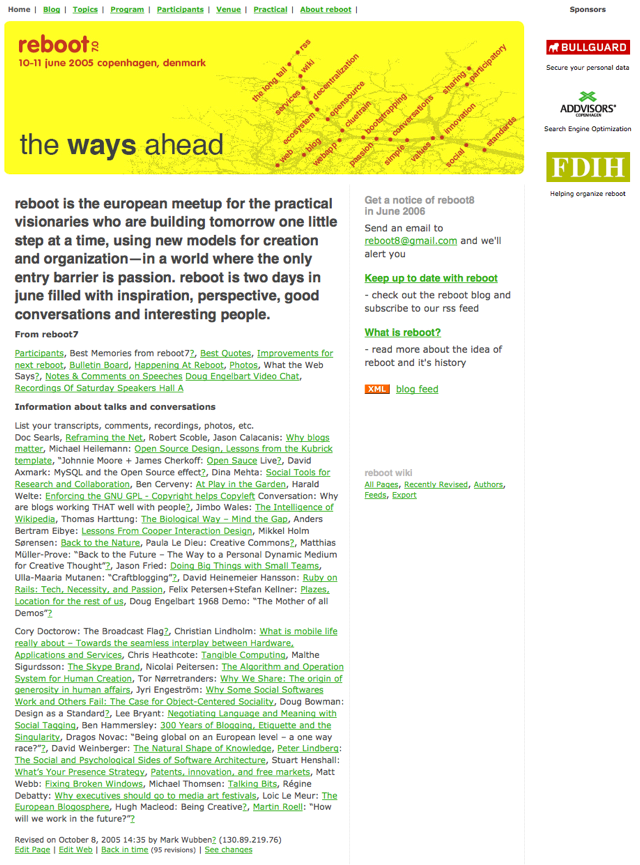 I’d first learned about Reboot through Ben Hammersley: a video of his talk at Reboot 6 in 2003 prompted me to send him an email in the summer of 2003 asking him to come and speak at our nascent Zap Your PRAM conference here on Prince Edward Island. To my surprise, he agreed. And we built a conference around him. And then, for complex reasons related here, he had to pull out. But we went ahead with the conference anyway, and it was a rousing success.

A couple of years later, I reasoned that, given that Reboot had been the spark that inspired Zap Your PRAM, I should visit the “mothership.”

The stars aligned to make this happen when, on June 2, 2015 Air Canada announced a no-advance-purchase-required seat sale. I booked flights ($1273 return), registered for the conference, and found a hotel. With 5 days to spare. I sent an email to conference organizer Thomas Madsen-Mygdal letting him know that, after earlier sending a “sorry, I can’t come” email, my story had changed:

This morning I opened my morning paper to find that Air Canada started a seat sale, with headline “Fly to Europe on a whim…”  I took this as a sign.  I’ve made room in my calendar, and rearranged some finances, and I’m coming to reboot.

I’ve registered on the reboot website, and sent payment in by Paypal.

During my stopover in Montreal at Dorval Airport, I recorded a strangely-detailed podcast from the airport parking garage.

The next day, June 8, after flying overnight and transiting at Heathrow, upon my arrival in the CABINN Hotel I recorded another podcast.

And then, later that night, after several adventures involving my hotel room door not locking properly, I recorded yet another podcast, on that topic.

Although they were strangely-detailed, I’m glad I recorded those podcasts, as they are a pleasant little glimpse at younger-me through an audio time machine; I ruminated about this at the time.

By the morning of June 9, I was rested and fed and almost ready for Reboot to start.

I went out and about by bicycle for the day, recorded another podcast, where I reflected on my Copenhagen setup (iBook, Griffin iMic), on bicycling on the free Copenhagen bicycles, and on my visit to the Danish Architecture Centre.

After that full day of rambling around Copenhagen, I found my way to the pre-conference meetup at a bar downtown; at that event I met Jyri Engeström (memorialized in this photo) and then, a while later, Olle Jonsoon (memorialized in a story we both have versions of). One of the things Olle and I talked about that night was podcasting, and this prompted Olle to record one of his own, speculating on what was to come.

Reboot-proper started early the next morning, June 10, at Keddelhallen, and I recorded a little atmospheric sound from the front yard and then, a few moments later, some of the sounds from inside the main hall just before things got started.

And then Reboot began.

I learned. I ate. I met people.

Among those I met were Felix Petersen and Stefan Kellner, who presented (audio) about this thing they called Plazes, at the time a spare-time-hack, something I’d signed up for the September before and then promptly ignored. I re-installed Plazes on my iBook that night, and so my second Plazes “checkin” came on June 10 at 7:53 p.m. at Keddelhallen (something I know because I preserved my complete Plazes archive from checkin number one onward).

Last on the program on that first day was a showing of The Mother of All Demos (I captured a little audio here).

For that second day I opted to leave my iBook at the hotel and to use my Moleskine to “blog on paper,” which I described here and the results of which are here.

That night, en route to the post-conference supper, I met Mark Wubben and Anne van Kesteren – at the time young high school students. As it turns out, Mark was an enthusiastic listener of my friend Steven’s podcast.

That supper was, as it turns out, a big step for me in my rage against the shyness: I met a great collection of new people, simply by deciding that it would be a good idea.

That night, after the supper and the after-party, back at the CABINN I fired up Plazes again, and this gave rise to the Plazes-mediated meeting of Ton Zijlstra and Martin Röll.

The next day, June 12, I had another unexpectedly interesting supper, and then, on June 13, a walk in the countryside followed by supper in Sweden. 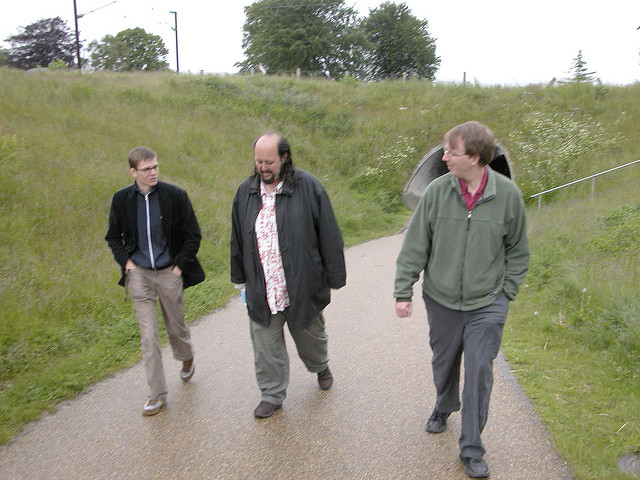 On June 14, I flew back to Prince Edward Island, via Frankfurt and Montreal. Exhausted but happy and very, very changed.

So many of the people I met at that first of the Reboots I attended are friends to this day; it seems like impossibly long ago that I met them all, but the intervening decade has been all the more interesting because of them.

And then, after five consecutive spring trips to Copenhagen, Reboot came to an end (or, perhaps, a multi-year hiatus?).

Reboot, we miss you!

Though you, Peter, might not remember me, I remember meeting you in Kedelhallerne, and also having you visit our Amaliegade-offices a few years later, as a friend of Luisa's..

Thank you for reminding me of these fantastic times..!

Of course I remember you!  I have told the story many times since of the wonderful lunch that was served at the Amaliegade offices the day that I visited as an example of how sensible and civilized the Danish are ;-)

Hear hear - one of the very finest reboots. I ran a tiny, tiny 'in the shadow of Reboot' gettogether i Copenhagen the two years after the last reboot, but didn't build it properly out to invite Reboot's international friends. Maybe next year....

Doug Engelbart spoke to Reboot over video after his talk, too.

Notice the ACM Turing Award on the wall behind him!

It’s even better than that: there’s video of this in the Internet Archive.

And thank you Peter for telling me about reboot and so also introducing me to to it. The best life/work experience ever. The "Woodstock" of our time I think. For to have been to reboot was to have special memories. Memories about the people we met.