Back in the mid-1980s I volunteered for a time as a FORTRAN programmer in the Vertebrate Palaeontology department of the Royal Ontario Museum, working with the great and kind curator and palaeontologist Chris McGowan.

Despite being a simple volunteer, I was allowed access to the ROM whenever I liked, and, on occasion, I would find myself in the department after closing, when everyone else had gone home, hacking away on FORTRAN (doing statistical analysis of swordfish larvae).

This, I realized, was my punishment for taking food that wasn’t mine, and I resolved never to cross that line again (a line I have, nonetheless, crossed many times since, often at my peril).

I thought of that night tonight as I arrived at the second floor of Robertson Library, after library closing hours.  I picked up a LG E2551 external monitor this afternoon ($139 on sale at Future Shop), and I wanted to get it set up in the office, and figured “after dark” would be a good time to do this. (And, after all, who doesn’t have boyhood dreams about being inside the library after everyone else has gone home for the night!).

I opened the door to room 322 only to find that the light wouldn’t turn on. I reasoned that I must be the victim of an after-hours-electricity-conservation program and wandered around for a while trying to find the master switch. But it evaded me.

Not wanting to waste the trip, I placed a quick call to Chief Librarian Mark Leggott, who, alas had never found himself in the same situation, and couldn’t point me right. A second call, however, to crack Digitization Initiatives & Systems Librarian Don Moses, paid off: “walk into the tiny room beside the circulation desk, he said, and then look on the wall on the left before you turn,” he told me. And, sure enough, there I found: 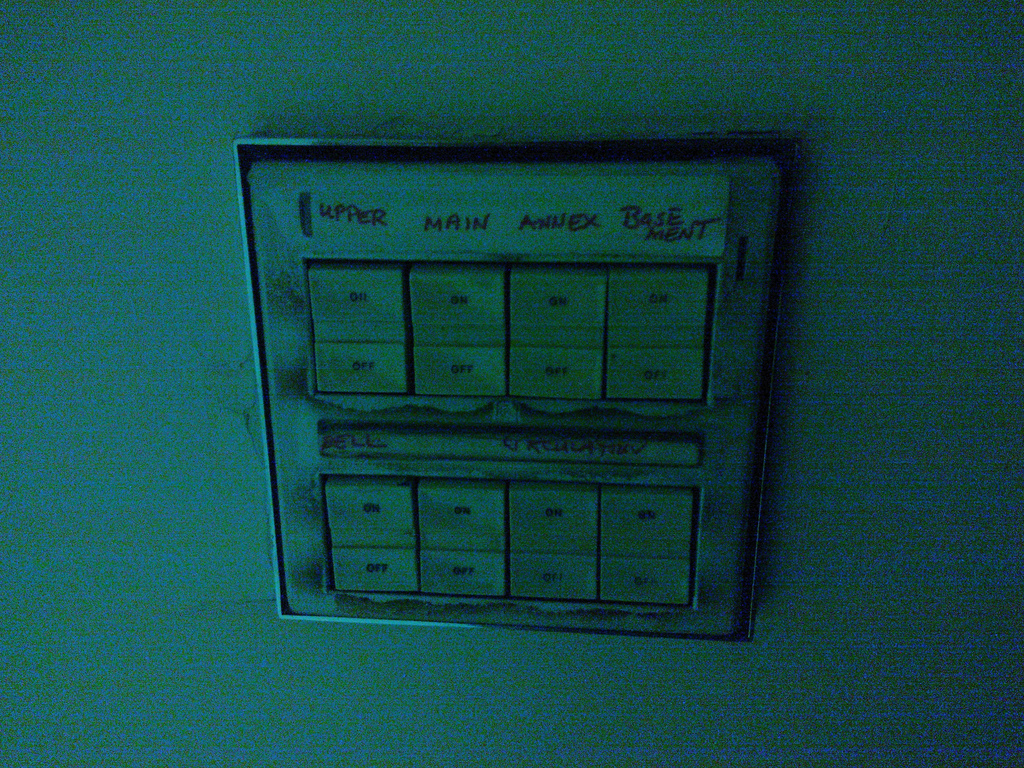 I hit the switch marked “Upper” and poked my head out to see what had happened: all the lights on the second floor had turned on (the granularity of the lighting panel leaves something to be desired, obviously), including the light in room 322. So, here I am in my tiny light-filled room, lighting up the entire second floor of the library as a result, working away (note to self: buy a floor lamp to avoid having to do this in future).

To avoid being arrested by eagle-eyed security (“breaker, breaker, we’ve got a lights-on in the library, code 79, code 79, swarm… swarm”), I placed a quick call to alert them of my presence.

And now I am ready for hacktion.