The Island Fringe Festival had its launch party last night at Marc’s Lounge, and Oliver decided that he wanted, at the last minute, to respond to the open call for poets to read “found poetry.”

Fortunately the Fringe team is on the ball and digitally-engaged, so the request-to-perform reached them in time for him to make the list. And so we headed over to secure a seat around 7:30 p.m. for an 8:00 p.m. start.

Because of Prince Edward Island’s antediluvian liquor laws, Oliver was only allowed to be present until 9:00 p.m., and so there was some last minute stress surrounding whether he’d be able to go on stage before turning into a Prohibition pumpkin, but, again the Fringe team rose to the challenge and made sure he was on in the first hour.

Oliver is a master of the acrostic poem, an excellent adaptation that accommodates he’s need to express with his challenges with choices: it’s a poetic hook to hang his hat on, so to speak, and to watch him pull a poem out of the digital ether is a sight to behold.

Here’s the poem he read:

I love the phrase “continuing to recreate completes things in the present.”

There was an intermission of sorts just before 9:00 p.m., and Oliver insisted we high-tail it for the door lest the Provincial Treasurer come and haul us out by the coat tails. 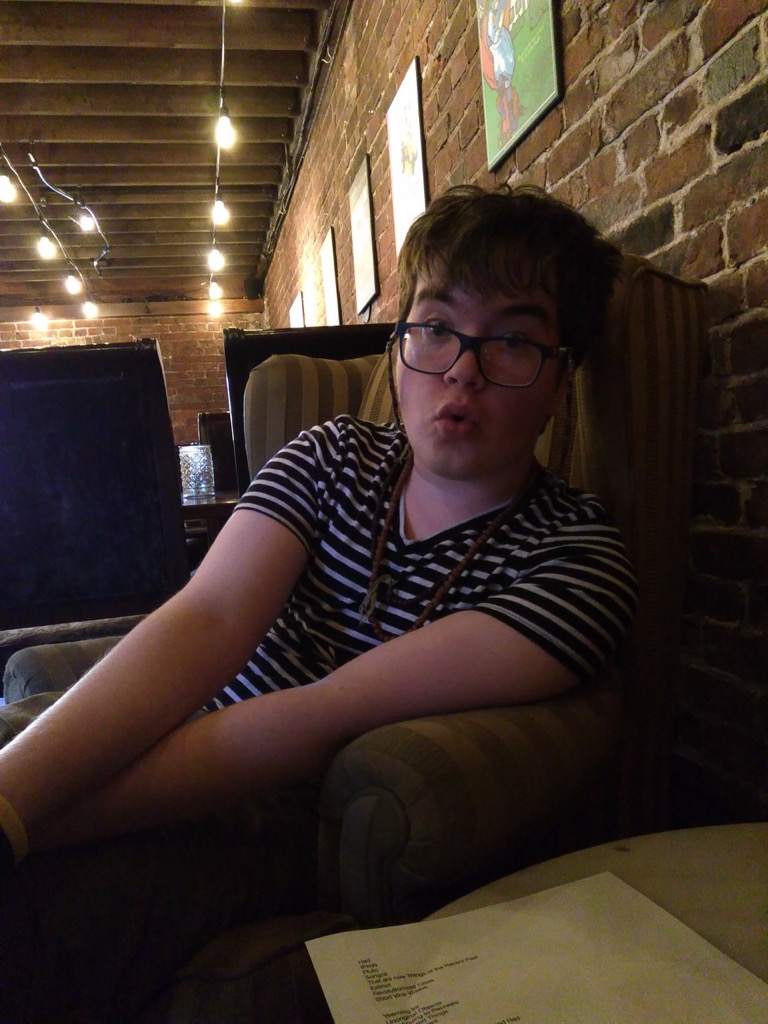 Sorry that I missed this. So great, Oliver!

Also, I had to look up both xenocracy and yuccies, and have read about acrostic poems. And also ponder over Pluto (is it in reference to the planet or is there something else yuccies call pluto?) So, thank you Oliver for the many lessons.

Xenocracy was new to me as well, and Oliver explains it well if you ever have occasion to ask him.

I think Pluto is Pluto, although who knows: perhaps it’s a new drug or social media app; “post that up on Pluto so Syndy can see it before she slices…”

I have things that are gone: iPods (iPod Nano and Shuffle), Songza (Google Bought Them), Pluto (Not a Planet Anymore but a Dwarf Planet)
I think Xenocracy is a foreign or outsiders government.

and Vine is Gone.

Generation Xers and Yuccies are Here.

Atari is coming back: https://www.youtube.com/watch?v=5WNsmCpdhhY

Atari is coming back in the Age of Xenocracies: https://www.youtube.com/watch?v=5WNsmCpdhhY

I found the following on Urban Dictionary:

xenocracy
a condition in which a country is ruled over by foreigners or foreign forces. (Before independence, India was living under xenocracy. At the time, the British were ruling over the country.)

"Continuing to Recreate Completed Things In the Present" is what is happening now to everything: TV, Movies, Video Games, Etc.

Yes indeed. It is the creative problem of our times: the increasing reliance on iteration of the 70s and the 80s pop culture brands rather than developing new ideas.