I have found myself in the happy happenstance of having my very own researcher. Scott Bateman, a colleague from back in the www.gov.pe.ca days from a decade ago, is now a assistant professor in the Computer Science and Information Technology department at the University of Prince Edward Island.

Scott’s research interests include “collaborative and social computing, information seeking and visualization, and interaction techniques for video games” and in that light he approached me with an idea earlier this year: knowing of my interest in electricty generation and load monitoring (here, here, here), Scott was interested in the possibility of investigating how everyday devices in the home might be used to influence personal “energy behaviour.”

Although he didn’t put it this way (and would likely speak of this work less dramatically, being a more sensible person than I am) what he was essentially talking about was doing some work on the problems that Bruce Sterling outlined in the Viridian Manifesto in 2000. Like this:

The stark fact that our atmosphere is visibly declining is of no apparent economic interest except to insurance firms, who will simply make up their lack by gouging ratepayers and exporting externalized costs onto the general population.

With business hopeless and government stymied, we are basically left with cultural activism. The tools at hand are art, design, engineering, and basic science: human artifice, cultural and technical innovation. Granted, these may not seem particularly likely sources of a serious and successful effort to save the world. This is largely because, during the twentieth century, government and industry swelled to such tremendous high-modernist proportions that these other enterprises exist mostly in shrunken subcultural niches.

Scott proposed that he become a contract researcher for Reinvented Inc. under the Industrial Research Assistance Program of the National Research Council, investigating opportunities for the creation of what we have taken to calling, shorthand, “thingy development.” The “thingy” being, well, a thingy in a house that, in some way, modifies the owner’s energy-using behaviour in a positive way.

This seemed like a good idea to me: ideas I’m interested in both personally and “corporately” could be forwarded, Scott’s research interests could be forwarded and “market opportunities” for Reinvented might manifest. One imagines this is exactly what IRAP is supposed to do.

Scott and I are on the same page as regards to intellectual property for this enterprise: we’re both believers in the power of openness, and neither of us had any interest in keeping this work secret.

The paperwork for the IRAP funding has been wending its way through the system and this week Scott received and NDA – non-disclosure agreement – for the project from the NRC. He rightly assumed that no such NDA was required, given our commitment to openness, and replied as such.

But this got me thinking: what about, instead of an NDA, we sign an MDA, a Mandatory Disclosure Agreement. This agreement would stipulate not only that the results of this project will be made public and open, but also compel us to explain and interpret these results. To make an effort, in other words, to disclose what we’re up to.

Happily again, this aligns with another one of my research interests (if that’s what you call them), expressed most obviously in this letterpress-printed broadside from last year: 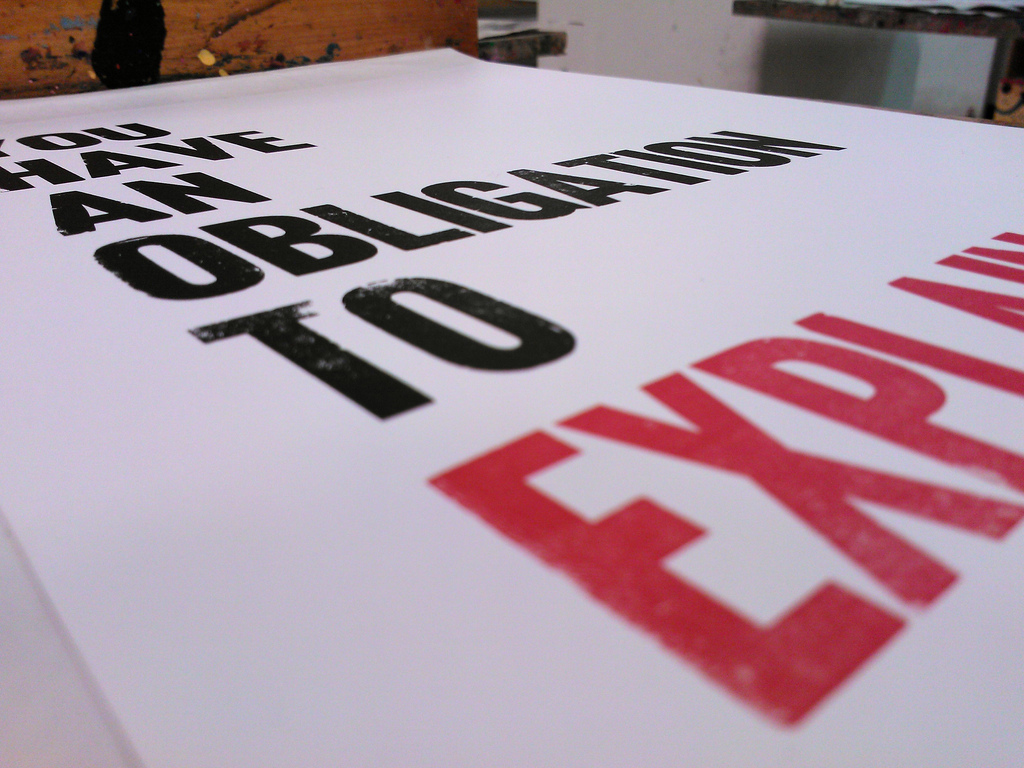 That broadside, in turn, had its birth three years earlier in a lecture I gave to a Philosophy of Technology course at UPEI called Privacy and the Obligation to Explain.

So, in other words, ideas born in a philosophy lecture spring to life on the letterpress and then later give rise to a “working philosophy” in a computer science project that eventually might reach the “market.” I’m pretty sure that’s how a university is supposed to work.

I like the sound of this. Our experience living off the grid has given us a very different perspective on using electricity and we are always very conscience about whether or not we have enough to do what we want to do. Needs versus wants become very important during cloudy/rainy periods. And then we save some things to do when the sun is shining.

Great post, thank for this. I am ready to sign on to the “MDA” for this project, and the good news is that UPEI doesn’t require and NDA. We should even think about drafting up this document. Although, it seems the default is to offer an NDA for this type of arrangement at the University. In academia, I have never had a problem with people “stealing” my ideas. And I think (or at least hope) the trend in the start-up world might be moving away from NDAs (http://jamesaltucher.quora.com….

I would like to document my work to date; I am not sure I have a platform suited to this though, and I don’t currently have a blog. But anything that allows code headings, paragraphs, code snippets, and pictures would great. Any suggestions?