The Wikipedia entry for Arthur Murray was started a decade ago on July 6, 2003. On that first version of the entry Murray’s birthplace is listed as New York, New York (emphasis mine):

His birthplace in Wikipedia remains New York right up until the version of June 13, 2007:

Arthur Murray was born in New York City in 1895 as Moses Teichman.

Six days later, on June 19, 2007 there was an anonymous edit to the page that changed his birthplace to Galicia:

Arthur Murray was born in Galicia, Poland (at the time it was part of Austria-Hungary) in 1895 as Moses Teichman or Teichmann.

Two years later, in the version of June 26, 2009, this got even more specific with the addition of a sidebar that listed his birthplace as “Todhajca, Kingdom of Galicia, Austro-Hungarian Empire”.

This was updated on November 1, 2010 to “Podhajce, Kingdom of Galicia, Austro-Hungarian Empire”, a village that happens to be 100 km from Serafyntsi where my great-grandfather was born two years before him.

His birthplace in Wikipedia has been listed as Podhajce ever since.

What do other sources say?

Because the Wikipedia edits that changed the birthplace to Galicia were anonymous and without sources, it’s impossible to know whether they are accurate, and there’s certainly evidence from multiple obituaries and well-accepted sources to suggest that his birthplace was New York and not Galicia. But there’s also evidence to the contrary that supports his being foreign-born.

For example, there’s a passenger record in the Ellis Island collection for “Moses Teichman” (Murray’s name at birth) that’s a close match for his circumstances (and perhaps the source for the Wikipedia?):

There’s this passage in the the book Ellis Island’s Famous Immigrants: 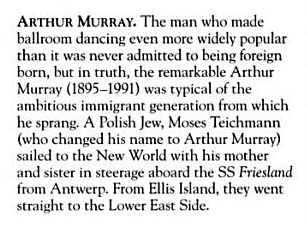 So where was Arthur Murray born? Who knows. The sources-of-record say one thing, the crowd, and some others, say another.

This is an example either of Wikipedia’s virtues in exposing accurate information where others fail, or in Wikipedia’s failure to properly source and credit facts, depending on your point of view. If nothing else it’s a demonstration of why we need to teach our children to use the “History” feature of Wikipedia to understand the provenance of the “facts” they find there.

Interesting. Good lesson, and I admire you for teaching it.Totally fitting too for your library position.

…and about as far as my Koschuk side in Husiatyn, neighbour.