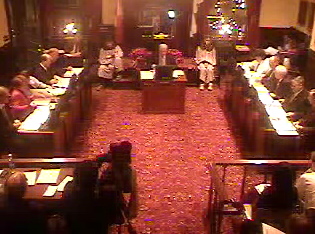 As would anyone with a technology spider-sense, I was skeptical when I heard of plans by the City of Charlottetown to install “a variety of innovative information and communications technologies (ICTs) to promote E-democracy” in the council chamber. The “innovative technologies” have now been in place for more than three years — enough time, I think, for “all the bugs to be worked out.” So last night I went to the regular monthly meeting of council to try and get a sense, from the public gallery, of how it’s working out. Here’s what I found:

After spending an hour at the meeting, my general impression regarding the new technology is “why?” Is it so difficult to run a meeting of ten people that complex technology must be brought in? What was wrong with the way Council meetings used to be run? Are there any councillors who would honestly state that the technology is actually, as it was supposed to, “opening its doors to more effective participation from its citizens in the democratic process.”

At some point, they voted for this system themselves.
They must like it, or they’d vote to abandon it?

I always thought dressing up meant tight shoes and uncomfortable clothes, maybe they think technology means they must press more buttons and have their view blocked?

What price did they pay for it, and to who?

Those are interesting observations. Our Council here in Kingston governs a population roughly the size of PEI’s total and, given the difference between the degree of downloading of jurisdictions to municipalities, governs many more aspects of civic life than Charlottetown does. It operates, however, on the basis of paper reports, hands being held up, speaking and listening. Our efforts towards introducing communications technology for democratization purposes have focued on our public web pages as well as some early electronic service delivery in addition to the simple broadcast of Council meetings live on cable TV. I do not know if digitizing the process of meetings would add anything and might, as you say, detract. It would be interesting to know about the approach of other municipalities.

This seems to be a case of doing something for the same reason a dog licks itself — because he can. I’m sure someone thought it’d be nice to have the cachet of being among the first to digitze democracy, and if the goal was to reduce the mountain of paper and the consequent rummaging, that’s not altogether bad.

As it is, it seems this system does have one unintended up side: it exposes those councillors who are just too dim to deal with a touch screen and log-in page.

I was partially involved in this city initiative

When I was younger and thought myself smarter, I used to imagine that technology aids — power point projected onto a screen etc would enhance my ability to get my message across.

As I get older and more humble, I have come to learn, as someone who can never keep his mouth shut, that to be heard, I have to listen. The fewer barriers in the way of eye contact and direct interaction the better.

My take on the Council Chamber is that it is designed to inhibit communication by people who do not want to have a conversation. Sad

The question is: now that the damage has been done, the money spent, and the renovations made, how can this technology be extracted from the process? Who would dare pull the plug and throw it all away?

How do the little people in white dress’s tie into the system?
<img src=”http://sunmail.ca/cityangel.jp…“>

The little people in the gowns seem to be pages, but unfortunately there doesn’t seem to be much for them to do. Last night the single bored looking young man sat there unemployed all evening.
While we are ridiculing the brains behind the technology could we find out who was the sadist who made the pages dress up in those absurd outfits?

I concur with Gary: the poor page had nothing to do. Of course this may be because he hung his head in his hands all night long. Not sure which was the cause and which the effect.

In the state assemblies in California and Ohio, which I visited recently, each desk has a lap top. I don’t know how their screens might affect people’s vantages on the non-cyber happenings, but they can be inclined or folded completely out of the way. I’m not sure, but I think the tour guide in California told me the representatives could only surf the state intranet and not the World Wide Web. In any case, I think both places the guides said the point of them was being able to search and call up statutes, court descisions and the like, which continues to seem to me like a great way to promote legislative efficiency, if not to enlighten the drafting of legislation. Maybe PEI should install some hinges for their monitors and just use their computers for legal research?

Pages! My heavens — the grandeur. Is there a Master of the Black Rod as well?

Update: I talked to two Charlottetown city councillors today. Both of them said they would be better off without the technology. I’ve emailed the rest.

The raising of the hand was an innovation we haven’t been able to beat in many places.

As usual, my previous post came across as way too serious ;-)