My favourite part of the legislative calendar in Prince Edward Island is the “consideration of the estimates,” a line-by-line review by Members of the Legislative Assembly of the Estimates of Expenditure and Revenue. The Clerk tells me that this exercise is increasingly uncommon in other jurisdictions; I’m happy it’s one that Prince Edward Island has held onto, as the questions from the opposition on government’s spending and revenue often shed interesting light on how and what government is doing, and provide a useful set of critical eyes on an operation that can always benefit from it, no matter the government of the day.

I sat in on the consideration of the estimates for the Department of Agriculture and Fisheries yesterday, and I was immediately struck by the degree to which the process remains unelevated by the gifts afforded by digital technology: every question to the Minister was followed by a flurry of page-turning in the marked-up binder he used to guide him, and while he did a creditable job making his way, many questions remained unanswerable, at least immediately, because the answers were filed elsewhere.

This got me thinking that, through the transformative powers of HTML, we could make the Estimates of Expenditure and Revenue a much more navigable guide simply by linking it, internally and externally, with relevant information, information that might even obviate the need for the opposition to ask questions in some cases because the answers would be self-evident. In other words, we could avoid back-and-forths like this (from April 20, 2016): 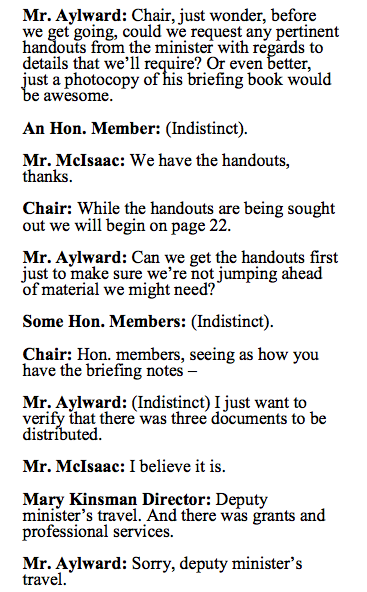 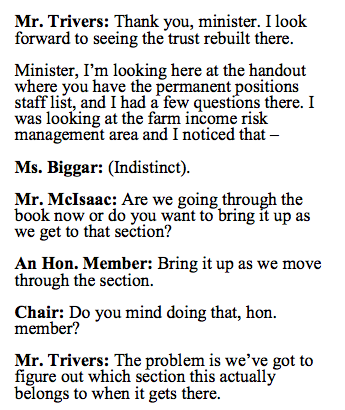 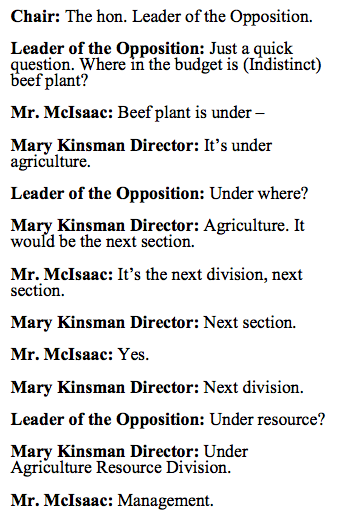 These are all examples of process bottlenecks that could be solved by better information management: a well-indexed, hyperlinked, intelligent Estimates of Expenditure and Revenue web resource would connect the otherwise disconnected dots and allow members to concentrate their discussions on substantive issues, not on “what section is that under?” questions.

Here’s a simple example, of more utility to we the people than to legislators, but one that illustrates what I’m thinking about. Page 10 of this year’s Estimates of Expenditure and Revenue is a table titled “Expenditure Summary by Department” that, in essence, says “here’s how we spend our money.” It’s a high-level summary broken down by department and agency that shows the current budget’s estimate and the previous budget’s estimate and forecast. In the PDF the government releases, it looks like this: 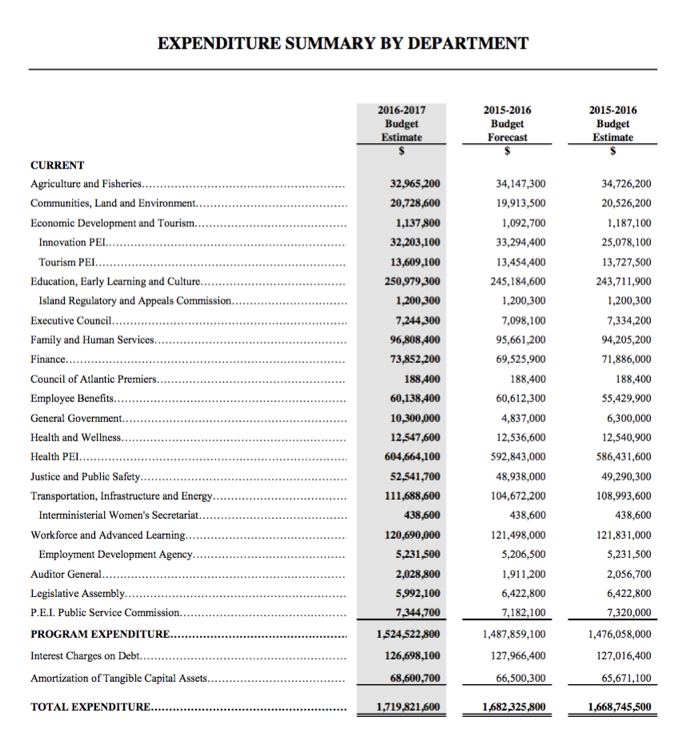 The line items in the first column are an excellent candidate for hyperlinking. Converting the table to HTML (a non-trivial process at present as the structure of the PDF is labyrinthine), it’s then easy to make each department and agency a link to a page on the government website:

It would be easy to add intelligence to the estimates so that hovering over any number would provide some additional insights, like (this non-functional mockup):

Looking under the hood of the Estimates of Expenditure and Revenue PDF file reveals, via metadata, that essentially the same document flow has been in place since fiscal 1996-1997: 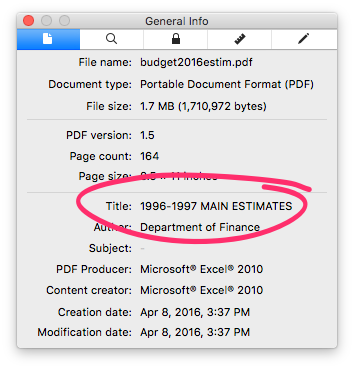 In the intervening 20 years we’ve learned so much about how to make information more useful by making it more linked, more navigable, more like a node in a network than an paper enclave.

I move (am I allowed to make motions here?) that for the next fiscal year we set ourselves the goal of crafting a thoroughly modern version of the estimates.

I second that motion. What a great basic first step this would be - towards not only efficiency, but better transparency.

I keep talking about exposing data (eg via XML, web API, etc) but, hey, we have to start somewhere!

What bugged me even more was during capital budget questioning where the detailed project breakdown was available for summary line items, but the Min of Finance would only release this information verbally when questioned and not publish it! But that could be more of a political problem.

Thank you for seconding the motion.

I’d like to think this would be a motion that would receive tri-partisan support, as it’s one that would help the opposition parties in their job, but that would also make Ministers more effective at theirs.