In the spring of 1994 I was working as a programmer and database-feeder at the PEI Crafts Council here in Charlottetown. I’d originally been hired to develop a standalone database of crafts supply sources (clay, wool, etc.); but when we realized that the database I was developing was going to be useful to people in the rest of Canada and the USA, and that the Internet – “the information superhighway” as we then called it – might be a way of making that happen, the project suddenly became a lot more interesting.

With some seed funding from CANARIE I build a tiny Linux server on an IBM PS/2, hooked it up to PEINet over a pair of 14.4 kbps modems over a leased copper circuit, installed the just-invented CERN httpd server, and thus brought to life the first webserver on Prince Edward Island, www.crafts-council.pe.ca.

The Internet was a very different kind of network back then, almost completely non-commercial, and full of the potential of noble purpose. None involved in making it had much of an idea what it might become, but there were a lot of lofty ideas.

In May of 1994 a gathering at Apple in Cupertino, organized by the late Steve Cisler, Apple Librarian, brought together many of the lofty-minded for a conference on “community networking” called “Ties that Bind.” From Steve’s first notice about the conference:

On Friday I will be posting an announcement for a community networking conference to be held May 4-6 in Cupertino, California. It will be of interest to librarians, community organizers, non-profiteers, government MIS workers, educators, and drifters on the InfoBahn. It is going to be cheap, fun, and intense.

When I read that announcement I decided that I had to go. Partly because it involved the stuff of my work – I was community networking using the Internet – and partly because, well, it was a chance to spend time on the Apple campus with a bunch of cool people. And it was to be “cheap, fun, and intense” – my kind of activity.

I still remember the meeting I had at ACOA with the Gerry O’Connell and late Sandy Griswold looking for $500 in funding to get me to California; they were intrigued, but my proposal was challenging to them on two fronts: $500 was way, way too little money to be asking for; and I was looking to go to California, not, say, Bathurst, New Brunswick. The optics were too challenging for ACOA to deal with, so I was referred to the provincial Department of Economic Development which funded my trip under the Cooperation Agreement on Rural Economic Development.

Which is how I ended up on a plane to San Jose in early May, 1994, seventeen years ago.

There’s not much record of the conference online – it was too early in the age of the web for breadcrumbs to be left, and so this box at Stanford from the Apple archives is likely the definitive resource. But it was cheap, fun and intense, as promised. And although I was shy and retiring and incapable of “networking” in any real sense, just being in the same room as people like Howard Rheingold was invigorating. I came back from California full of piss and vinegar, and everything else that I’ve done with the Internet since can really be said to have grown from that root. I think the Cooperation Agreement on Rural Economic Development got its money’s worth.

Apart from all that invigoration, one of my lasting memories from that trip was from the first morning of the conference. I asked at the front desk of the hotel where I was staying how long it would take to get to Apple’s campus on Infinite Loop. “About 15 minutes,” the front desk clerk told me.

What I didn’t realize was that, it being California and all, the default setting for “how long would it take to get” question was “by car.” I was on foot.

I thought of all this today when I came across this video, from the City of Cupertino’s council meeting last night where Apple’s Steve Jobs presented a plan for a new campus for the company, just up the highway from Infinite Loop. It’s a beautiful new building, and Jobs’s presentation is as skilled as any Apple keynote he’s ever given, albeit with a layer of “Brady Bunch goes to Hawaii” fish-out-of-waterness. 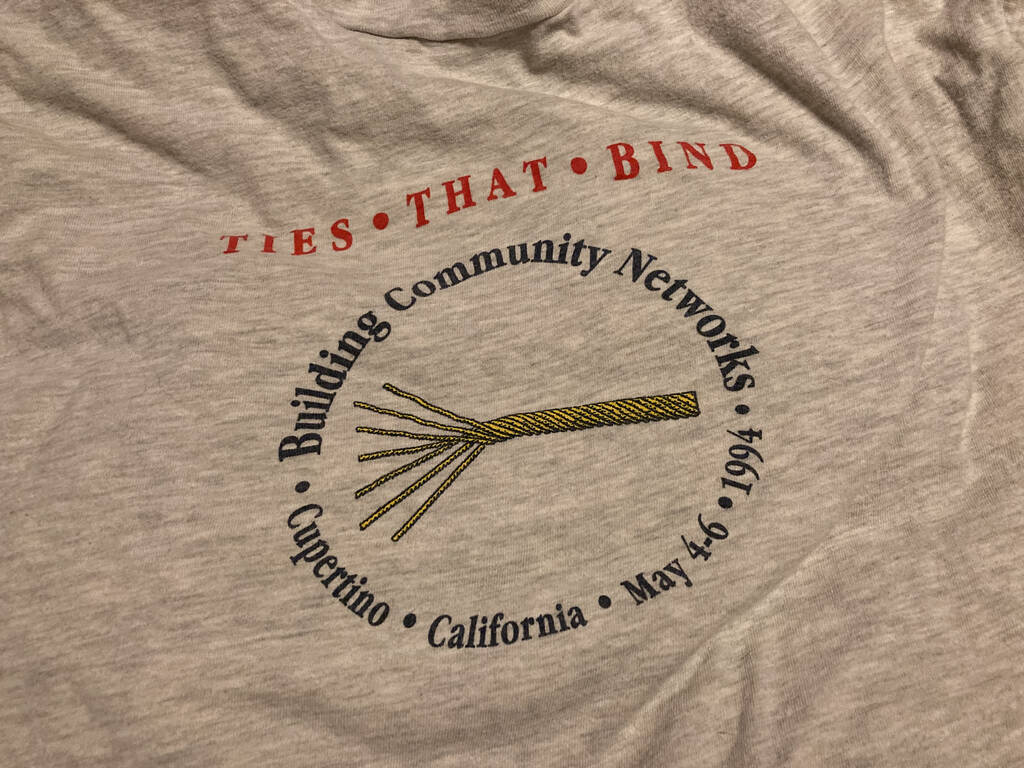 Walking is the one mod of transport no one thinks of down here. Lots of cyclists and busy arterial roads backed up for blocks, though. But Stanford provides a free shuttle service that even extends out to the research parks on the edges of the campus, so what would have been an hour’s walk each way to get to work for me is now just a 20 minute walk + 10 minute shuttle ride. Then again I haven’t fallen into the trap of wanting to buy a house down here, which would mean living two towns over from expensive Palo Alto.

I saw these numbers in a Hacker News thread about the proposed Apple building:

So a city block in a real, urban settings, still wins hands down for an environment for people to get to and work in, but I think the valley is too conservative to consider any kind of move towards real urbanism.

What I took from this is that many people automatically look to the government first to pony up and pay for it. And when those people get the money from government, they are proud. The last person they think of to foot the bill is themselves.

Did Jobs look for a handout to get started? I doubt it. Would he be as successful if he was the type to do so? Doubt that, too.

It was maybe a bit subtle in the video but Jobs mentioned that there were other cities in the area that would be happy to roll out the incentives for Apple to move there, but he personally wanted to stay in Cupertino — while hinting that they shouldn’t put up too much of a fuss in approving it or he’d happily entertain other cities’ open pocketbooks.

Our maritime inferiority complex might lead us to think that in the real world businesses don’t take every opportunity they can to reduce costs and externalize capital expenses but I can assure you they do — everywhere.