On recent trips to Germany I’ve been using a pre-paid CallYa Vodafone SIM in my Nokia N95. For voice and SMS it’s proved just fine, and once I figured out that I could recharge it online, it was easy to top it up. Data, however, was a killer; although I was never sure just how much it was costing me for data, I had a visceral sense that it was a lot, as even just firing up Google Maps to fine out where I was seemed to drain €5 or more from my account.

While I naively thought that I could deal with this limitation on this trip to Germany, going back to old-school paper maps and chits of paper in my pocket, this system has proved ineffective: stumbling around looking for ones destination is all very well and good until you overlay cranky family members (and/or cranky self). Then you just really, really want to find the sushi place in a non-serendipitous way.

Getting information, in English, about pre-paid SIM options in a different country is always a challenge: long-term expats and bona fide locals are no help because they all have real mobile contracts and no nothing of the pre-paid world. Mobile shops are seldom help because they either don’t deal in the pre-paid market at all, or want to steer to you a contract because it’s better financially for them. And because the pre-paid market is mostly a local or national one, pre-paid provider’s websites, even for the big players like Vodafone, are usually not available in English.

In the past I’ve turned to Telestial, a U.S. company that specialized in helping travelers deal with the exact problem: they sell pre-paid SIMs from their website for a variety of countries, complete with English-language instructions and support. This has worked out well for me in Croatia and France on previous trips. But it’s not always the best deal, and Telestial SIMs don’t always include data.

So one is generally left to Google for help, and in this case the CCC Camp website proved an excellent pointer; in response to an FAQ about mobile data they write: “according to teltarif the cheapest prepaid options are NettoKom and Blau.de.” As it happens, NettoKOM happens to be the mobile offering from the Netto grocery store chain, and they have an outlet a block from our Berlin apartment. 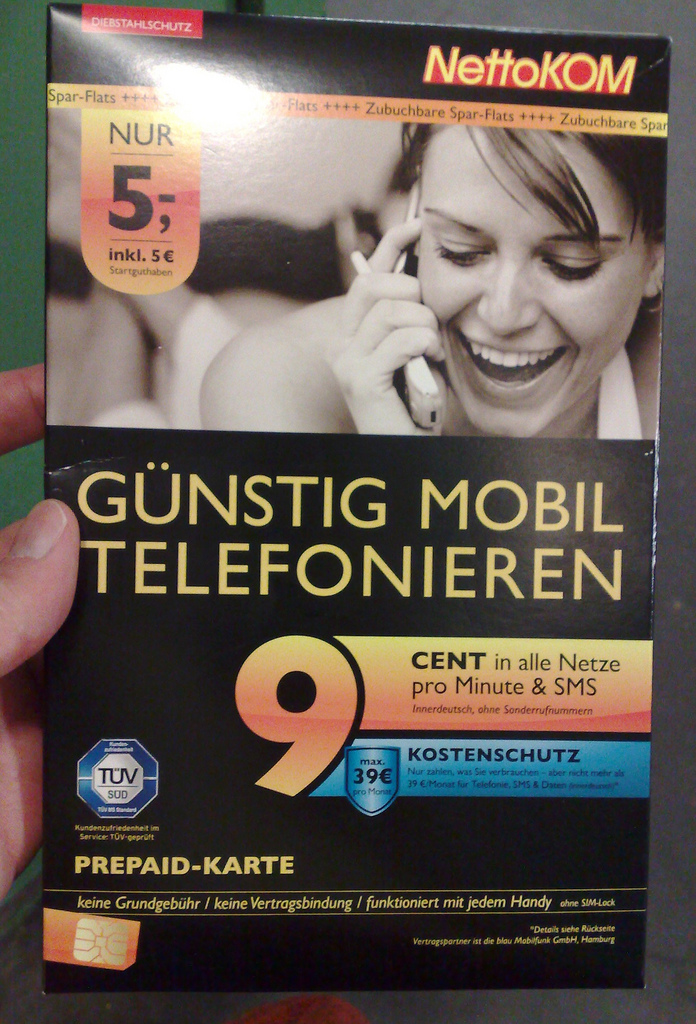 So this morning on my way into the office I stopped by, found pre-paid SIMs boxed up by the counter for €5, and picked one up. I was able to activate the SIM from the Nettokom.de website through judicious use of Google Translate and some good guessing (note that you need the receipt from the Netto purchase to activate: you’ll be given a Kassencode PIN number that you’ll be prompted for during activation).

Once I activated online I had to wait 30 minutes, then turn the phone on, enter the PIN I received with it, and make a first call; at that point my balance online (or via the *100# service code) showed €5 and I was ready to go for voice and SMS.

For data the best option for me, with a North American phone that’s only EDGE-data capable, is the Internet-Flat S, which costs €4,90 for a month, and includes 100MB of data at “full speed” and then throttles the data back (to some unspecified degree) after that.  As I’m never going to get “full speed” anyway, the throttle is of little consequence.

To add the Internet-Flat S to my account I needed to phone 1155 from the phone, press 8 for “service options” and then, listening carefully in German, navigating through to Internet packages and then the Internet-Flat S. I wish I could relate exactly which numbers I press, but I was fully focused on listening for keywords and numbers (and thankful for the German numbers practice Oliver and I did over the weekend – eins, zwei, drei). About 10 seconds later I got an SMS confirming the package had been activated, and I’m off to the rates: essentially unlimited data, 9 cents a minute for voice and 9 cents an SMS. For some reason I cannot fathom I can also make calls to the US and Canada for 12 cents a minute.

As a result of all this my mobile number in Germany has changed; if you happened to have the old one on file and I haven’t texted you an update, let me know.

Postscript: I got the data to work (the APN&#160setting came via a Service Message SMS). At least partially. I can use the Google Maps and GMail apps and the built-in web browser. But all other apps, including ProfiMail and Gravity show a “Network Error -46” when trying to connect to the Internet.

There are four APNs installed: Internet, MMS, WAP and WAP (yes, there are two named “WAP”). I’ve tried all four and get the same result.

The weird thing is that these apps don’t work even when I’m using Wifi. &#160If I remove the NettoKOM SIM I have no wifi issues and these apps work fine; put the SIM back in and they work neither with wifi or via mobile data.

It was incredibly helpful for finding a decent pre-paid mobile data plan on our recent trip to France.

I bought a nettokom prepaid sim card and was not aware that I needed to keepthe receipt in order to activate the sim card. Is there any way I can still activate it or find out the pin number that was printed on my receipt?

Is the PIN printed on the plastic card that the SIM was enclosed by?

Avoid this provider. In order to activate the s*upid SIM card, you need to call the Lord of Waldemort, cross seven seas, kill a chicken and dance naked on a full moon. Seriously, there's a reason why Telecom is number one. Don't be cheap.