Pardon me, but I spend an inordinate amount of time thinking about things like this.

My Danish friend Luisa revealed to me that the letter otherwise know to me as “o-slash” — ø — is not, as far as Danes are concerned, a “letter ‘o’ with a slash through it” but rather a bona fide letter all its own. Or, as Wikipedia says:

Speakers of languages which use the letter ø hold that it is not a ligature or a diacritical variant of the letter o (That is, emically they perceive it as a different letter entirely).

Which leads me to the question of Upper Prince Street. 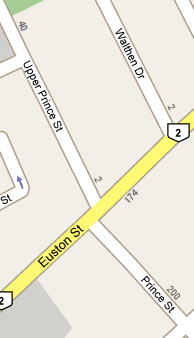 Please let me know your view on this.

Going back to the 1880 Meacham Atlas, a map of Charlottetown shows Prince Street (lovely, wide) and Upper Prince Street (narrower, at an angle, shorter than now). I agree that although Charlottetown likes to use those royal references in street names, they are two different roads.

Similar thought, should the Queen Street Meat Market still be called that?

Here’s a better URL syntax for your Check@UPEI links.

And you should be using this image…
http://library.upei.ca.rlproxy…

The 1863 Business Directory lists both an “Upper Queen Street” and an “Upper Great George Street”, but no Upper Prince Street, although it is a residential area, and seems to have existed at the time, but probably did not have any businesses.

Upper Great George started somewhere north of Kent Street, as there are businesses listed at the corner of Kent and Great George. I believe that all the “Upper” streets were extensions of the original streets, which stopped at the original edge of town, Euston Street, the end of the 500 lots surveyed in 1764. Upper Prince is the only one of the three north-south-running regal streets that does not line up with is non-upper counterpart, and is, I think, the only one to be separately numbered, so there is certainly a good arguement for its independence. On the other hand, East and West streets in New York also have different numbering, starting at a common central point, but are considered the same street.

Upper Great George and the part of regular Great George north of Province House later became “Elm Avenue” and in 1969 became “University Avenue” in honour of the founding of UPEI.

The northern parts of Queen Street are, even today, referred to as “Upper Queen”, although the starting point is no longer clear.

Needless to say, the Queen Street Meat Market was originally on Queen Street, before it was moved to University Avenue. Personally, I would like to see them change it to “Queen City” meat market, to help it retain some of its regal origins. However, having it named after a street it is no longer located on certainly adds some interest to it!

Whether you’re on Bloor East or West you’re still on Bloor, and ditto for Yonge North or South…to a point, I guess. In those cases, your “legal address” probably would include the East, West, North or South, just as “Upper” might be part of a legal address on Prince. I don’t think Upper works any differently than those terms, but the thinking can go either way and evolve. I suppose we had “America” before we had North and South America, and I suppose West Vancouver only aspired to be Vancouver before it began to count as such to anybody. If you aspire for “Lower” Prince to be thought of as one with Upper Prince, a little campaigning could do the trick. Probably “Lower Prince” isn’t exactly the wording you’d want to use.

I think of it all as Prince Street. I have a harder time reconciling that Queen Street extends north past Belvedere especially when turns west at the end.

We have “lower” streets in Kingston. Created when the waterfront was built out into the river in the 1800s.

The original West Kent School was located on the west end of Kent Street — at the site of the Provincial Government building complex (there is a plaque there to commemorate this). The new school kept the old name and was located further west in Brighton on Viceroy Avenue.

The original Queen Square School was located at the intersection of Great George & Richmond (the legislature parking lot you see today). This school has completely disappeared with no successor. There is a plaque on the site IIRC.

Are you sure that Prince Street School was located at the corner of Grafton and Prince. My source says that there was a kindergarten there run by the Methodist Church, the same church that also founded Prince Street School, but that they were otherwise not connected. Appreciate any light you can shed.