Following the promise of success in my drive to get Cousin Sergii equipped with high speed Internet on the farm in Green Meadows, I headed out to Bell Aliant’s old maintenance shed at the corner of Queen and Belvedere in midtown Charlottetown yesterday. I was greeted by Marcie, who I’d spoken to earlier in the day, and she handed over a small paperback-book-sized box containing a Bell-branded Novatel MiFi 2732, a credit-card-sized device that is, in essence, a cell phone that only does data. 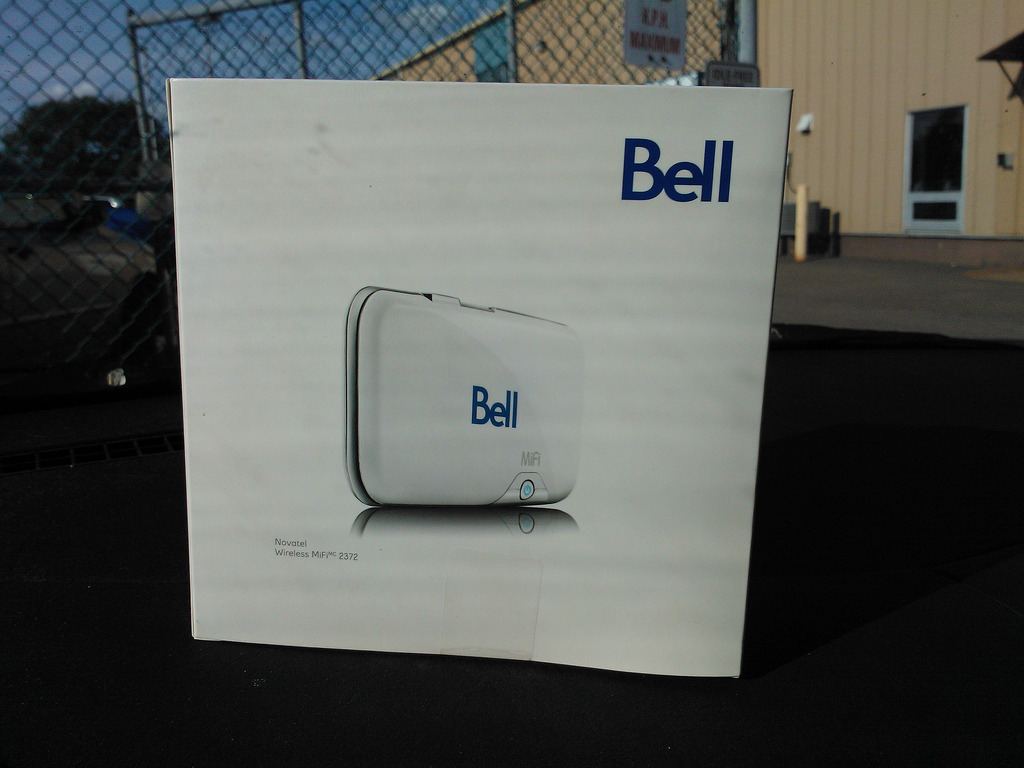 Oddly, I was strongly advised to not leave the battery in the unit — it can run by an internal cell-phone-sized battery or by electric plug — because “the batteries can expand” (there’s more details in this 2010 report). But, okay, we can run the device from the mains with no problem.

Marcie was very helpful: walked me through the setup of the device, gave me some tips about day-to-day usage, and so on. She’s the kind of helpful “when you call, I’ll be there”-style employee that Bell Aliant needs more of in their call centres.

I headed home to downtown Charlottetown to test the device before heading out to Green Meadows; it worked without issues: started up, found a signal and, when I connected by wifi to the device’s SSID, I was prompted for a WPA password which, helpfully, was printed on a label on the device itself. 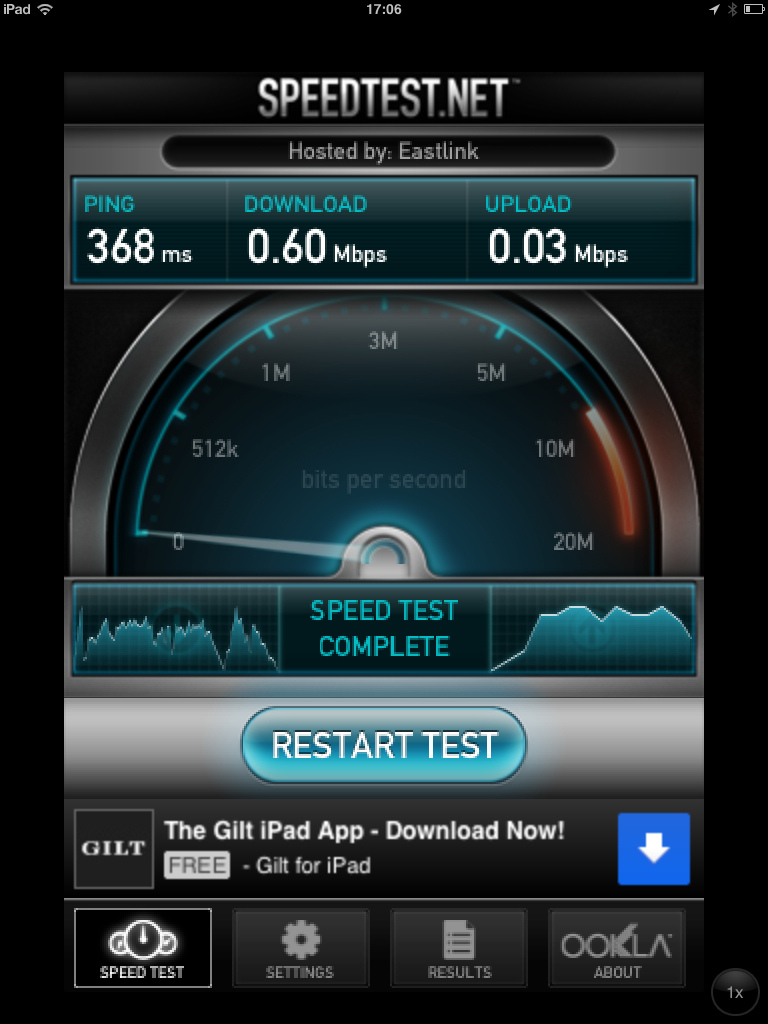 In town the throughput wasn’t great — 0.60 Mbps down and 0.03 Mbps up, which is much less than the device’s theoretical 7.2 Mbps down and 5.7 Mbps up. But I’d been cautioned by Marcie that the service is kneecapped by Bell Aliant so as to be equivalent to the throughput on their rural wired DSL Internet, so I wasn’t expecting “high” high speeds (I can see the internal logic of this “parity” in service, but it does seem odd to handicap a device in the name of equity; I suppose the concern is the shock customers would experience otherwise when forced to “downgrade” to wired Internet).

But, even at 0.60 Mbps down, I could still make Skype calls (albeit audio-only), and surf the web (albeit at dial-up like responsiveness), so we packed everything up and headed out to Green Meadows.

On arriving we were warmly greeted by Sergey, who, without mobile or wired phone nor Internet, told us he’d spent “two days out of the world.” 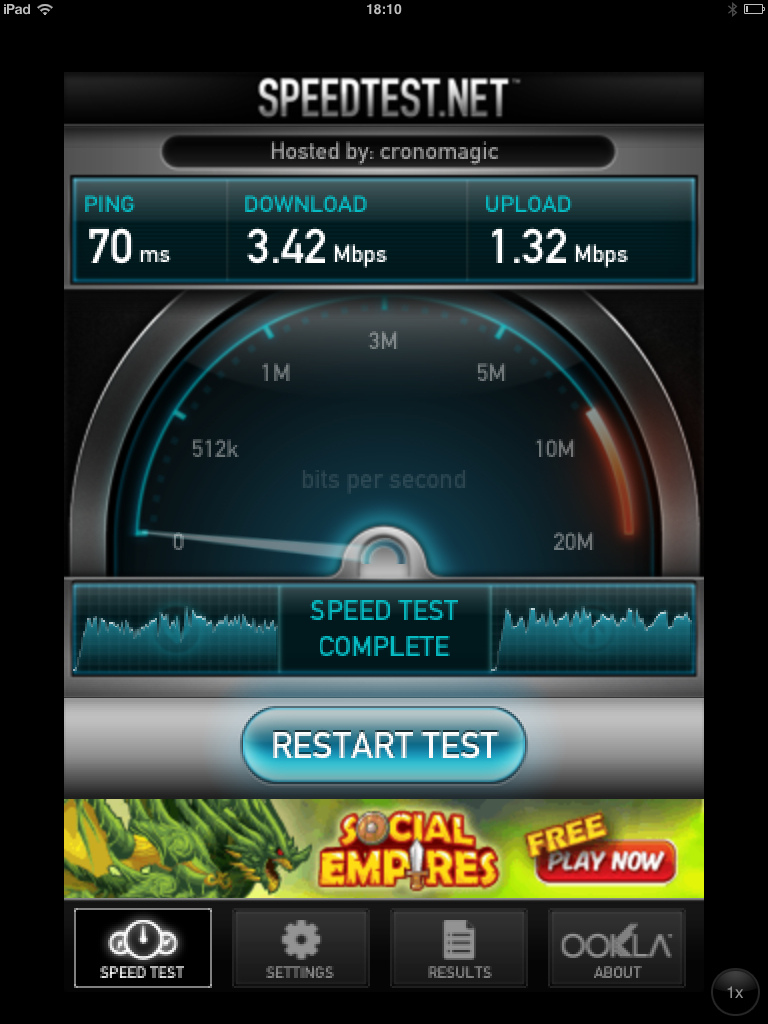 I powered up the MiFi unit, set it on the window, and connected to it with my iPad and ran another speed test; to my surprise and delight the situation was much improved over the city: 3.42 Mbps down and 1.32 Mbps up. Sergii connected his laptop via wifi, fired up Skype, and was, shortly thereafter, doing a full-on video Skype call with his wife and daughters in Ukraine, taking them on a tour of the house he, for his time here on PEI, calls home.

Bringing Sergii “back into the world” and letting him reconnect with his family made all my machinations this week worth it. I snapped a photo of the happy family chatting away and sent it off to Bell Aliant, just to remind them what wonders their technology is capable of.

It’s useful to remember in all of this, that if you’d told 1994-me that there would be a day that you’d be able to pack more than a “T1” full of bandwidth into something you can slip into your pocket, I’d not have believed you. Really amazing bandwidth back then was 14.4 KBps, which is 0.0144 Mbps, or 237 times slower than what Sergii has out on the farm now.

Barring any changes in throughput (or unanticipated battery expansions), Sergii’s set now. Thanks to all who helped make this happen.

My father has had the aliant rural wireless internet Mifi setup for almost 2 years now. I can confirm that the Mifi batteries do swell, his was swollen to the point that it popped the battery cover off.

Unfortunately it’s all a big secret, so getting the service or getting help with the service can be frustrating.