By way of beta testing the ability of my newly-printed postcards to withstand the travails of the postal system, I mailed one to myself on Tuesday afternoon; it arrived in this morning’s mail, two days later.

Setting aside that it took 48 hours for the postcard to travel from 101 Prince Street to 100 Prince Street–because the mail is processed in Halifax now, 300 km away–I was dismayed to receive the postcard with the stamp “cancelled” by a stroke of a ballpoint pen and missing a postmark completely: 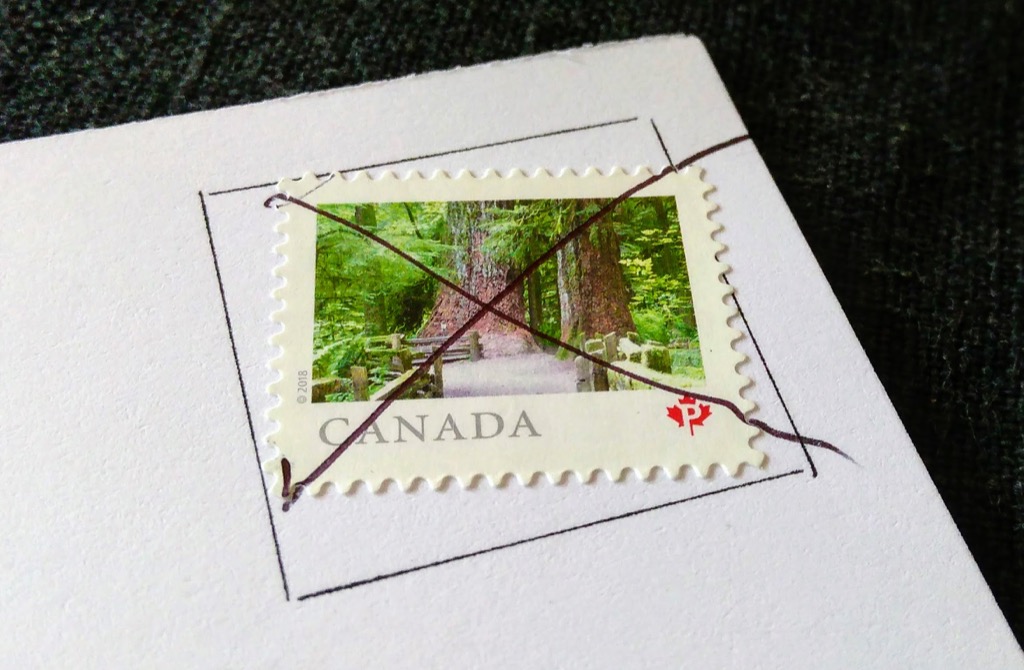 Not only are the aesthetics of this offensive, but the lack of a postmark removes any formal record of the postcard having traveled through the mail at all.

My postal sources tell me that the likely reason for the pen-cancellation is that the postcard could not be mechanically sorted, needed to be hand-processed, and the postal worker who did the processed was not equipped with a cancellation stamp.

Even when this doesn’t happen, and the robots can do the sorting, the postmark and cancellation applied are for Nova Scotia, not Prince Edward Island, resulting in a troubling absence of postal sovereignty.

The same sources tell me that I can take mail to the central post office on Kent Street to be hand-cancelled; that’s my next test.

I had three letters come back this week with the pen stroke through the stamp as it needed more postage. I did take my mail to the post office to be measured and weighed. Fortunately, when I went back they corrected their error. I was puzzled if I could just add more postage to the crossed out stamp or if I had to start again.

I confirmed at Charlottetown Station Central of Canada Post today that I can have lettermail hand-cancelled upon presentation there. They have a lovely hand-stamp that they bring out to do this. I can’t imagine ever sending mail any other way than this in future.

Apparently the same hand-cancelling service is available at the Green Gables Post Office in Cavendish in the summertime.