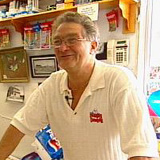 Earlier this week I heard that Bobby Clow has suffered a stroke; this morning I was deeply saddened to learn that he died last night.

When we moved to Kingston, PEI in 1995, going up to Clow’s Red & White became a regular part of our life: we bought our gasoline there, rented videos, bought groceries and hardware, and learned what was up in the community. The first time it snowed after we moved into our new house I drove up to Bobby’s to buy a snow shovel, and when I needed to do some emergency plumbing one Saturday afternoon, his wife Verna sold me 4 inches of metal strapping for 37 cents. And when the emergency plumbing didn’t work out, I got a recommendation for which plumber to call.

When my parents came to the Island for the first time for Christmas, I took my mother up to pick up our fresh turkey. Bobby greeted my mother like royalty, and he proudly took us into their house — attached to the store and reached by walking through the post office — and showed us his Christmas display.

Many refer to Clow’s as the “last of the old-time general stores” on PEI. But once you scratch below the surface you quickly realize that there’s nothing “old-time” about Clow’s: the store has succeeded by constantly evolving: adding products, dropping products, re-merchandising the store. What is old-time, however, is the service: consistently helpful, willing to go above and beyond the call of duty, and truly the centre of the community. And, with Bobby in the room, often incorporating some straight-talking wit that would either entertain you, or floor you, and often both.

When Dave Moses and I needed to hire a programmer to craft the Vacancy Information Service for, we ended up hiring Bobby and Verna’s son Gary. Not only did we receive the gift of a talented and irreverent programmer, but I also learned a little bit about what growing up in the middle of the maelstrom was like.

Bobby was perhaps the best-known contemporary Islander: I don’t think, in 14 years here, I’ve yet to meet someone, from down east to up west, who didn’t know Bobby. I remember flipping through the channels several years back and stopping at Cable 10 when I saw he was a guest on the Point of View call-in show. The calls didn’t let up, and everyone who called had some sort of connection to Bobby; it was an amazing sight.

My thoughts are with Bobby’s family tonight.

I grew up spending summers on my uncle’s farm in Cherry Valley. He was uncle by marriage and his sister’s son was Bobby Clow. Bobby was 6 years older than me. When he came by and later after he had the store in Hampshire, it was always like catching a fresh breath of the future. He exuded an unhindered enthusiasm not only for his and his family’s life but for everyone who came in contact with. I think had he had or wanted the opportunity, Bobby would have been a great scientist because of his innate curiosity about the world and his very con siderable intelligence which went hand in hand with a fine “down-hone” sense of humour. I have not seen Bobby since my aunt’s funeral in 1988 but I’ll still miss him on this earth.

I am 5000 miles away down here in El Salvador but I can still hear Bobby laughing|! Can’t you? If you can’t then you didn’t know Bobby very well. I had the privilige of working with Bobby and we had a lot of fun cutting meat together. Bobby made you feel special every time you came in. One of the most profound memories I have was as a kid playing hockey in Hampshire and when we won the cup Bobby took the whole team into Towers restaurant and we could order whatever we wanted. We were treated like princes back in a time when you were lucky to get a plate of fries if you went to a restaurant with your parents. My heart goes out to Verna and the boys and the whole community there as Hampshire will never be the same.

I had the honour of knowing Bobby Clow and now recently the next generation in his son Norman. My father Peter, better know as J. Pete, sold cars all over the Island. He would either have sold Bobby, a car, or quite possible from just dropping by and sharing a "Yarn" It would have been nice to have been a fly on the wall ... My father was in hospital at the same time as Bobby's mother and I would see Bobby and family faithfully visiting. I have had the blessing of visiting and hearing that great laugh.... lost but never forgotten ... The Clow family is a special group of people who love, care and serve their community.