Back in the early 1990s, shortly after moving to Prince Edward Island, Catherine and I had our first occasion to take the Borden ferry to the mainland, as part of a trip to Halifax to visit friends.

Following the crowd from the vehicle decks up to the cafeteria, we spotted Roger Younker, then the host of CBC Compass, the supper-hour television news cast. We were (or perhaps, more accurately, I was) star struck: a God walked among us. And he was enjoying two eggs over easy.

As we became acclimated to Island life in subsequent years I came to realize that spotting Roger Younker on the ferry wasn’t as much of a deal as it initially seemed, but that impression of the cafeteria as the agora in which Islanders of all walks of life could break bread together before heading out into the cruel indignities of the mainland remained with me.

And when the ferry was replaced by the Confederation Bridge it was that absence I missed the most.

Last week I had occasion to chat with a colleague at The Old Farmer’s Almanac about his family’s vacation to the Maritimes last summer; he pulled out his mobile phone and showed me some of the photos he’d taken at Hopewell Rocks in New Brunswick, site of the highest tides in the world. I realized that, in the 23 years we’ve lived on the Island, we’ve never been across to see the Bay of Fundy, and upon returning home on Saturday this fact loomed large; I could have suggested a family trip later in the season, but I feared that, like the last 23 years, it would be pushed to the bottom of the pile and remain a dream unrealized.

And so after breakfast yesterday I suggested we take an impromptu trip to Hopewell Rocks. Right away.

Catherine and Oliver are nothing if not game for the impromptu trip, and so 15 minutes later we were on the road.

I suspect that I’m not unique in feeling, when driving toward the Bridge, that as soon as you reach the greater Crapaud-Tryon area you have escaped something of the gravitational pull of Charlottetown and attained escape velocity; a new sense of calm comes over the car at this point, as a collective sigh of relief is breathed.

Historically it was inside this breath – sometimes punctuated by an extended wait in the ferry line – that one would have breakfast with Roger Younker; on Sunday we replaced this with a visit to Scapes, the improbably-located restaurant on the fringe of Gateway Village, the simulated community at the lip of the bridge.

While the balance of Gateway Village is a simulacrum, Scapes is a very much real, delightful place to grab a bite to eat, owned and operated by Sarah Bennetto O’Brien, a passionate chef who cares deeply about local, healthy food.

We enjoyed a lunch of scratch-made fish cakes (for Catherine and me) and a BLT (for Oliver), served by friendly staff in a tiny pleasant room.

Sitting on a stool at the front of Scapes waiting for my fish cakes, I realized that it’s the new way to prepare for embarkation: the new culinary precipice from which we can gather ourselves to confront life onshore. 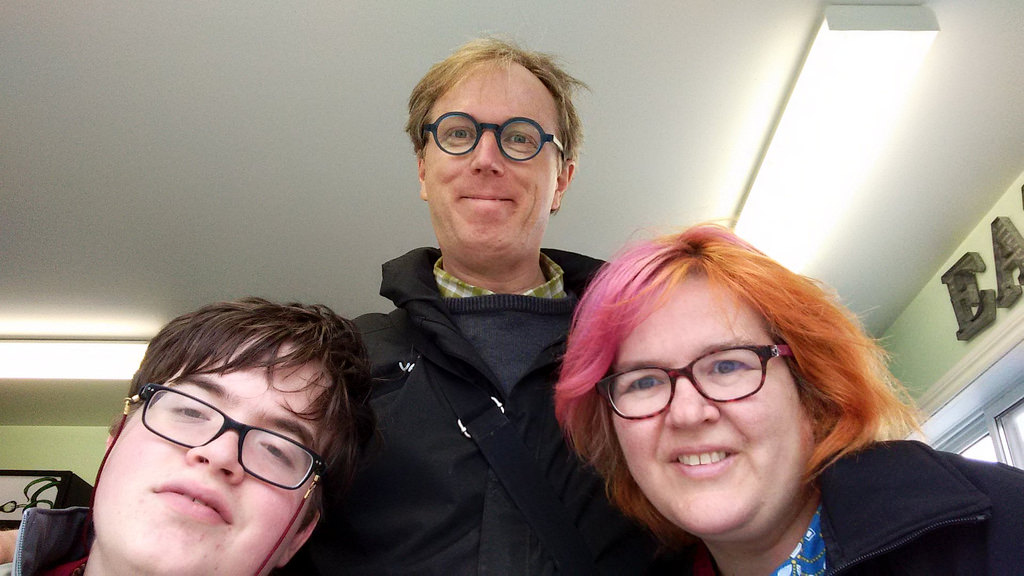 If Sarah could arrange for Roger Younker to drop in occasionaly, the scene would be perfect.

So happy to know there is something good to fill in for those ferry meals!! Will try Scapes.