One Friday evening earlier this summer we enjoyed a lovely supper at our friends Michelle and Bill’s house out in East Royalty. Returning home after supper we were in kind of a rush, as Oliver and I had plans to take in an Island Fringe show. Add to this rush that it was hot (and that our car has no air conditioning), that Ethan spotted another dog as I pulled into our driveway and was barking uncontrollably, and that there was a gaggle of young hipsters chilling on the porch next door, and I was not at my driverly best.

It was at this point that passenger side mirror met eavestrough. You can see the evidence still: 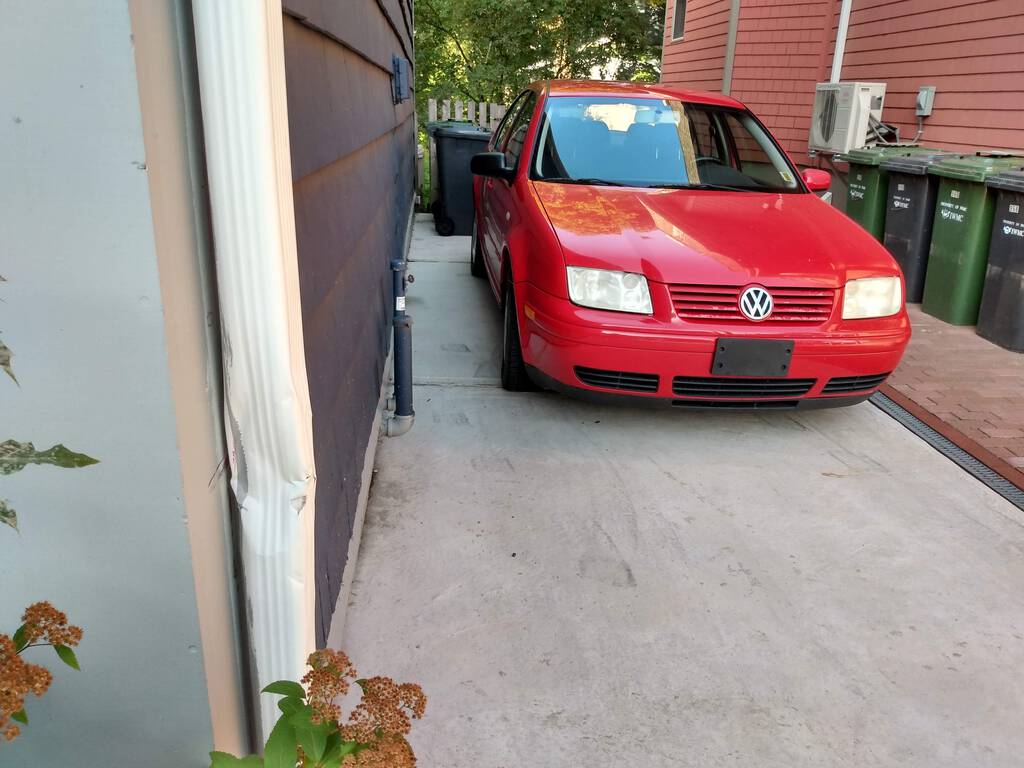 It’s remarkable that, in 19 years of backing this car into this driveway with this eavestrough located where it is that I hadn’t done this sooner: it was an accident waiting to happen.

By some miracle I didn’t rip the eavestrough right off the house; indeed it suffered very little damage, and young Henry from next door was able to make quick work of unmangling it before I even exited the car.

Otherwise the damage was limited to my pride, and to the destruction of the sideview mirror, which I carefully removed once I’d retained my cool. Here’s the mirror, deconstructed: 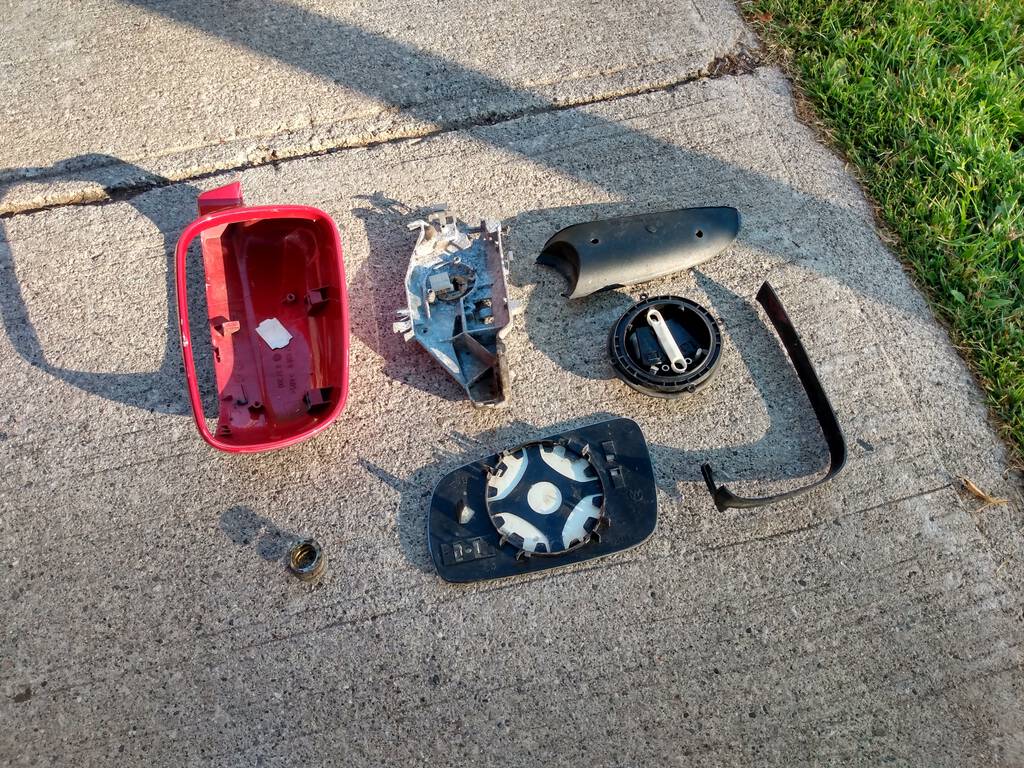 Replacing the mirror turned out to be a lot easier than I thought: I was able to order an aftermarket replacement from Amazon for $66.27, taxes and shipping in: 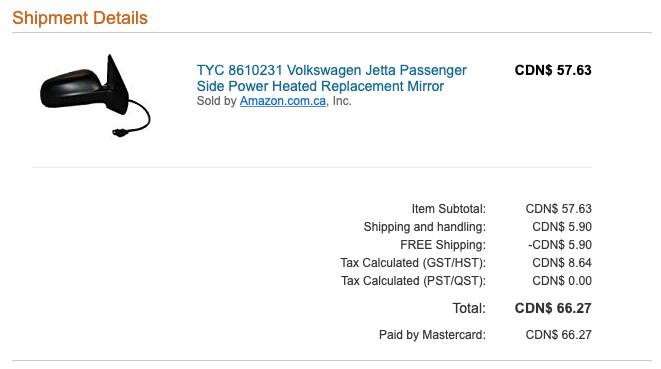 The mirror assembly arrived a week later, and I followed the helpful instructions in this YouTube video to install it. I had all the tools that I needed for the job, save the T45 Torx driver that’s used to remove the large bolt that holds the mirror itself; T45 Trox drivers are, apparently, rare birds, as Home Hardware had none, and Canadian Tire, in its wide range of Torx sets, had only one that included a T45. So I bought that set.

Once I had the T45, the only tricky part was getting the door to snap back into place via the plastic clips that hold it on: the clips were in various states of decay (the car, after all, is 20 years old), and sproinged off or got crushed in my early ham-handed attempts at reattachment. So I’ll make a visit to the VW dealer this afternoon to purchase some replacements. But in the meantime, I have a new mirror: 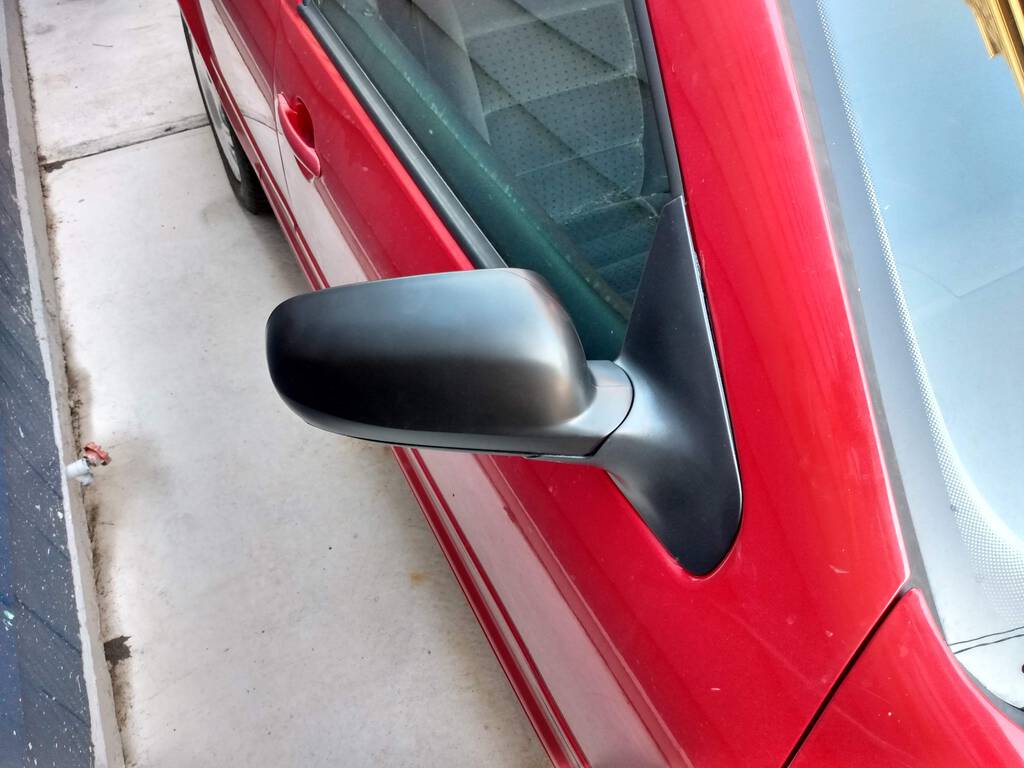 The replacement mirror, despite only costing $57, has all the functionality of the original: it’s heated (for defrosting in winter), and can be controlled remotely from the driver’s side mirror controls.

I’d rather this hadn’t happened at all, but I’m happy to have been able to repair the car myself, and those in my right-hand blind spot should feel slightly safer now that I can see them a little better.

This scenario, minus the hipsters, happens more often than you may think. I had this happen to my leased car back in January, two weeks before I was returning the car. I went nearly four years without even a dent. Amazon Prime’s two-day shipping saved the day.

I will forever by vigilant in the placement of downspouts and also remember where to go if I have a one-time need for a Torx T45, or apparently any size, driver. Well done, Peter.

I am happy to be your Torx-bearing neighbour.