In the spring of 1980, the year I turned 14, Greyhound Lines, a bus company in the United States, ran a “Thank You Canada” special to mark our country’s role in the Canadian Caper that had seen U.S. diplomats in Iran rescued with the help of the Canadian Embassy.

By purchasing a Thank You Canada pass, Canadians could enjoy unlimited bus travel in the United States for a month.

And what a grand adventure it was.

We took a Canada Coach Lines bus from Hamilton to the Greyhound station in Buffalo where we bought our passes. As far as I can recall, we didn’t have a plan, other than to see where the bus would take us for 30 days.

We started off by heading west, from Buffalo to Chicago, through Des Moines, Omaha, Salt Lake City, Reno, and Sacramento. We had to switch buses a number of times, but we never stopped moving, never spent a night in a hotel until we got to San Francisco. Those were the days when smoking was allowed on buses, and so my enduring memory of that mad transcontinental dash is of the pungent cocktail of cigarette smoke and bathroom disinfectant.

The rigours of sitting on a bus for three days put Dad’s back into spasm, and so our time in San Francisco consisted of a lot of hobbling around. Until we got to Golden Gate Park and he decided that we should rent bicycles: his theory was that riding a bike would either disable him completely, or solve his back problems. Miraculously, it solved his back problems, and he was fine for the rest of the trip.

From San Francisco we went south, bypassing Los Angeles and stopping in San Diego for a night or two; from there, having reached the end of the U.S., we turned back east, stopping in Tucson, El Paso, San Antonio, and Springfield, spending a few nights in every city, usually at the YMCA or a cheap hotel. We ate a lot of chicken fried steak. We never did laundry. And we saw corners of the United States of America that we never would have seen otherwise.

I think, in the end, we were gone for 21 days, not quite wringing every last drop of our 30 day entitlement out of the pass, but coming pretty close.

The trip was, by times, grueling and uncomfortable and scary. But it was the best trip of my life, and the best gift a father could give his teenage son: 21 days of undivided attention in a “wherever the wind will carry us” spirit.

It is not an exaggeration to say that trip changed my life, and laid the groundwork for an approach to travel, and an approach to life, that has been far more fearless, confident, and improvisational than it might have been otherwise.

My father died yesterday, at the age of 82. 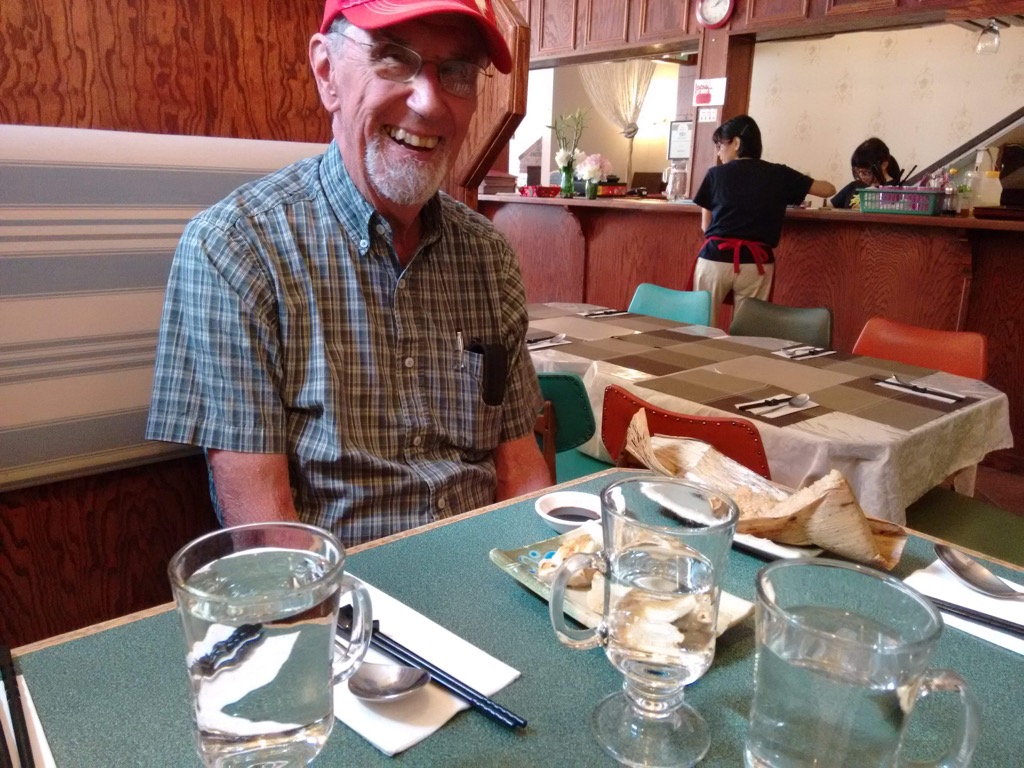 So sorry for your loss. But what great memories.

I am so sorry for your loss.

Condolences to you and your family. What a great trip and memory.

Peter,
You and your family have our most sincere sympathy on the death of your father. Thanks for sharing such an amazing story of adventure.

Deepest condolences to you and your family, Peter. What a great story.

What a wonderful tribute to your father, Peter. It tells a lot about both of you. I'm so sorry for this huge loss in your life.

This story fills in an interesting piece of the where-peter-came-from puzzle. I'm sorry for your loss but glad for you that you have this memory.

My sympathy to you and your family on the loss of your dad.

My condolences. Good to have such memories to cherish forever.

I am shocked and saddened by the news of Norm's passing.
I knew Norm for a long time at CCIW, having lunch many times over 30 years.
He did a lot things I remember, some few above and beyond, and now a new one in your story.
He did more than 100 months of the CCIW retirees newsletter. He archived some of his life's work.
He took you on that trip - and what a trip.

As you said, whatever possessed him?
My condolences - we lost a special man.

What a wonderful memory to have. My sympathies to you.

Sorry to be that sad now s.he was a very interesting person and will be missing.

I met Norm in 1955, doing Honours Science at U of T. He possessed a wonderful intellect, thoughtfulness beyond his years, true kindness and a delightful sense of humour. (Once in a mineralogy exam where we silently handed samples around to identify, he passed me a little chunk of magnetite - clinging to the end of his magnet. Without so much as a glance of recognition.
In all these years, not a week has gone by that I haven't thought of him.
With a hug for Fran,
Love, Jane

My condolences to you and your family, Peter. What a wonderful story. Your father most certainly inspired your love of adventure travel that I wished I possessed.

Had the pleasure of working with your dad for many years. He was a dedicated scientist and well respected by everyone at Environment Canada. He will be sadly missed.

Peter and Family - My sincere sympathy to you and your family at this sad time, I hope that many happy memories like the one you shared will help ease your tremendous loss -take care

Sending all our love to you and your family. Memories such as those will always keep our loved ones spirits alive. xo

So sorry to hear this, Peter.

Sorry for your loss, Peter & family.

I'm so sorry for your loss. And I'm really envious of your trip with him. What a wonderful thing to have done. I know and saw first hand how you brought that forward a generation with Oliver.
Take care.

What a marvelous use of time. Three cheers to the memory of your father - clearly an unbridled spirit.

I'm sorry for your loss, Peter. I think the last time we saw each other in person was when I was on the Island for my own father's funeral.

These memories we make, as parents and children, are incalculably precious. Thank you for sharing this brief glimpse into something so memorable.

Hi Peter, Over the last few weeks, with all the wonderful stories you shared about your father, I keep returning to this remarkable journey and what a gift it was from your father. It reminds me of the line from Alistair McLeod's short story, As Birds Bring Forth the Sun, about how things pass through generations, and that "you cannot not know what you do know." It's a beautiful thing that your father's time, patience, curiosity and kindness has passed down to you, and to Oliver, and what a gift that is to all of us who know you both. Thinking of you and your family these days. xoa

I just re-read this entry and am sitting here feeling very emotional. Norm was an incredible man and that trip was a wonderful gift. He was partially responsible for introducing my parents to each other and for that I will always be grateful.