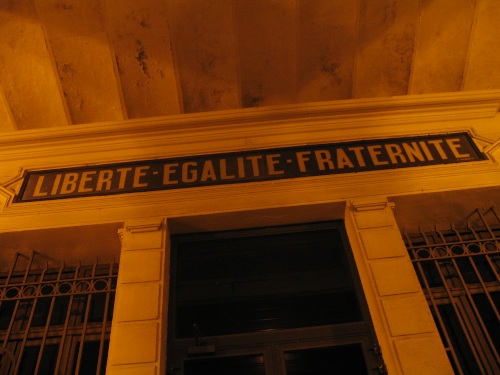 Peter, the bicycle valves you witnessed are called Presta valves and come on most decent bikes sold in Canada. The larger variety you’re familiar with (sans little closing screw thingy) are called Schrader valves and are common in Canada on bargain brand and older bikes.

heyy
well that is very nuts
but cool i am educated
now jsut cuz of you!
kirsten

Yo! Thanks man this is helping me with my PRO-JECT!!! which is due tommorow… I better get started!!! Soon!! AH! I’ll do it tommorow morning… Maybe… I’ll just wing the presentation! It’s just skool!! Right?!?!

Freedom, equality and brotherhood. Doesn’t get much catchier than that! XD

Among other things not mentionned about France:

-When you turn the water on, you pay for every drop as it comes out. If you forget to close the faucet properly, you can wind up with a heafty water bill…

— If you want to rent an appartment, you often have to give multiple garanties and even find a garantor to make sure you can afford the appartment.

— In restaurants in France, you often have 2 prices the “take out” price if you don’t eat in the restaurant and “eat in”. It goes to say that if you eat in the restaurant, you’ll pay more than if you bring it elsewhere..and the tip is included in the price automatically no matter how good or bad the service was.

— Living in France is very expensive. In Canada you get Cadbury cream eggs..about a buck or so..in France they are a euro or so.. the money has more value but the prices are higher.

— In Canada, when you work, your boss has more rights than the employer..in france this is reversed because employees have syndicates and acquired rights. You have contracts like “CDD”( temporary time contract) or “CDI” (Indefinite contract). If you get a CDI contract, you are in like flin..your boss can’t just fire you for any old reason unlike Canada where they can threaten you with “restructuration” to eliminate you among other things. To get rid of an employee in a CDI contract, the company has to proove beyond a doubt that the employee has been flagarantly incompetent somehow. Furthermore, if in this case you can proove that your employer has fired you for no reason, you can get compensation..

— The medical system in France is much better than in Canada..you can see a doctor in a matter of hours instead of a matter of months..but France’s health system is starting to colapse..

— French mentalities are very tricky..they are often not as open minded as canadians on many subjects. They also tend to be more concervative, less socially extraverted. They want to identify to themselves culturally therefore, they often don’t accept strangers..in many cases, they would prefer to keep their country for French people by fear of assimilation..Ignorance is bliss afterall. That’s just like my own home province, Québec( that is in Canada by the way!)

Those are just a few things..I know this because I’ve been living in France for over 2 years now..but I’m moving back to Canada. I miss my family and the amount of freedom you get in Canada is much greater than what you get in France.