Today was moving day for the Golding Jobber letterpress that’s coming into town from Campbell’s Printing in Tryon. The goal for today was to get the press – in all its giganticness – from Tryon into a Queen Street basement. In the end, we made it half way. 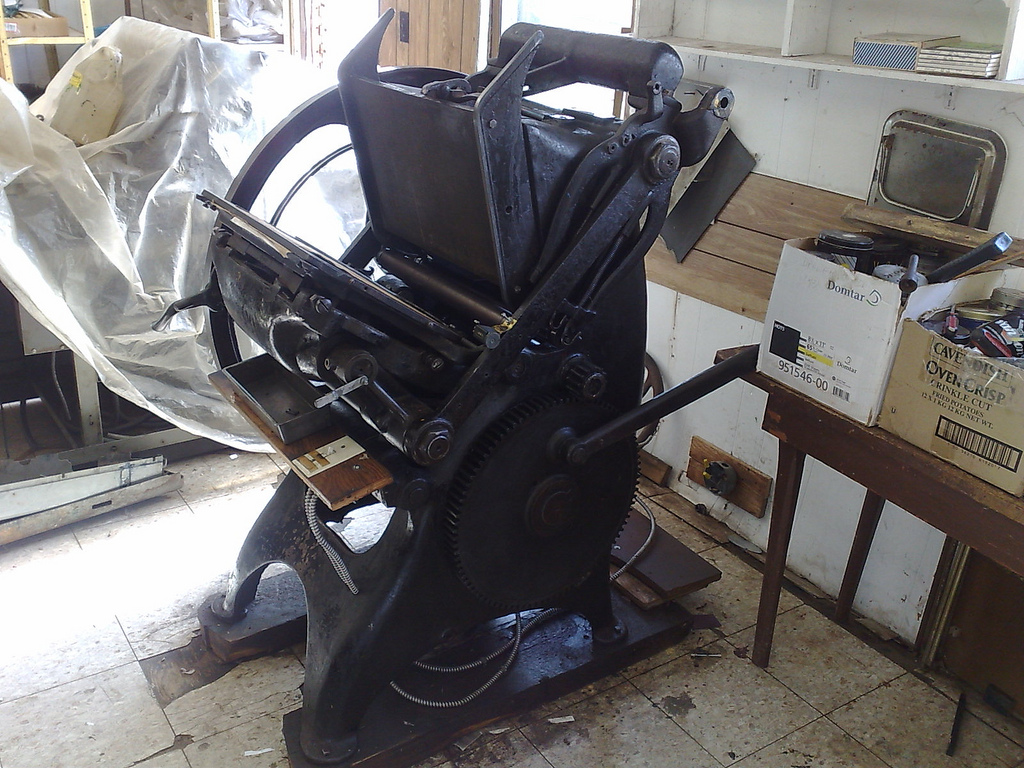 I started the day out at the Campbell’s working with Bill to peel of the removable parts of the press – the ink disc, engine, and various other bits and bobs – and get them into my car.

At 10:30 a.m. the mover arrived and from 10:30 to just after noon they tried, really really hard, to move the press. What was originally estimated at “700 or 800 pounds” ended up being, in their estimation, about 1500 pounds of letterpress, and top-heavy at that. These guys are piano movers, and they really struggled to wrangle the press in a way that didn’t wreck the press, or themselves. In the end it was beyond the tools they had available to them, and the press had only moved from the middle of the room to the door. They apologized for not being able to go any further, I paid them for their time and gas, and off they went. 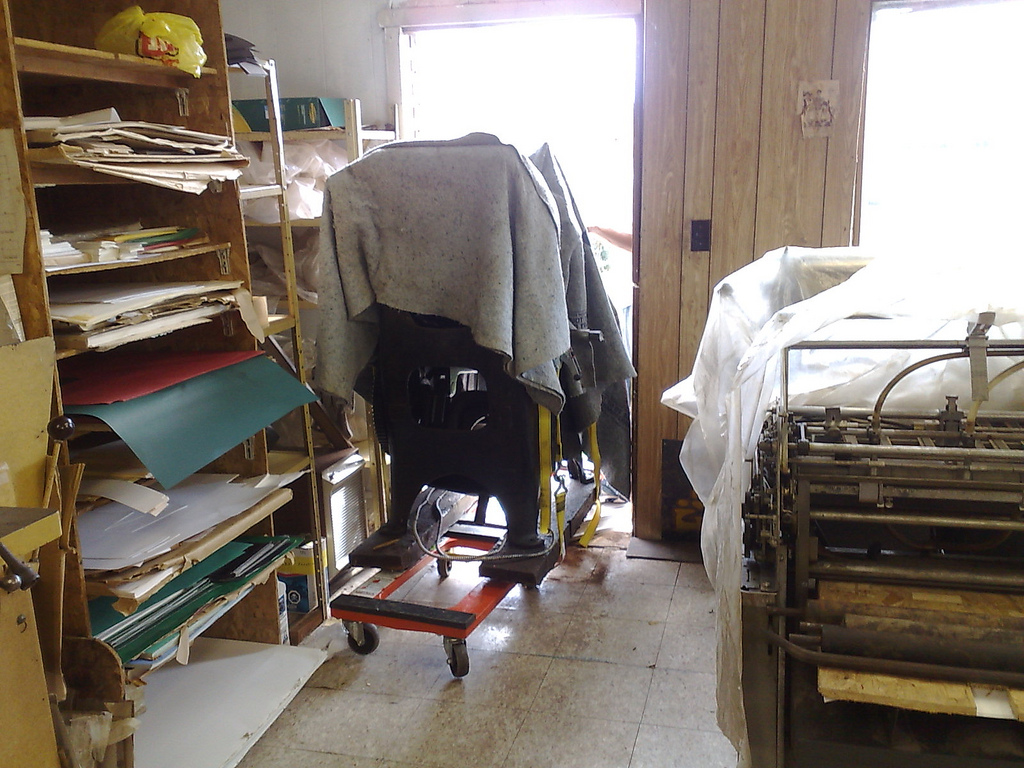 Next up was Griffin’s Towing on the Bannockburn Road. Bill and Gertie’s son works for them, and they knew that Griffin’s had serious “big stuff moving” gear. A call was made. Tea and turkey sandwiches were had.

And then, while we were waiting, Bill and Gertie and I managed to lower the behemoth from foot-high position on wooden blocks where it had been left and onto metal rollers. I don’t want to gloat, but the three of us did a pretty good job, and lived to tell the tale.

Twenty minutes later a flatbed tow truck pulled up, negotiations about position and approach ensued, and within half an hour the letterpress had been winched out the door and onto the bed of the truck and secure in place. 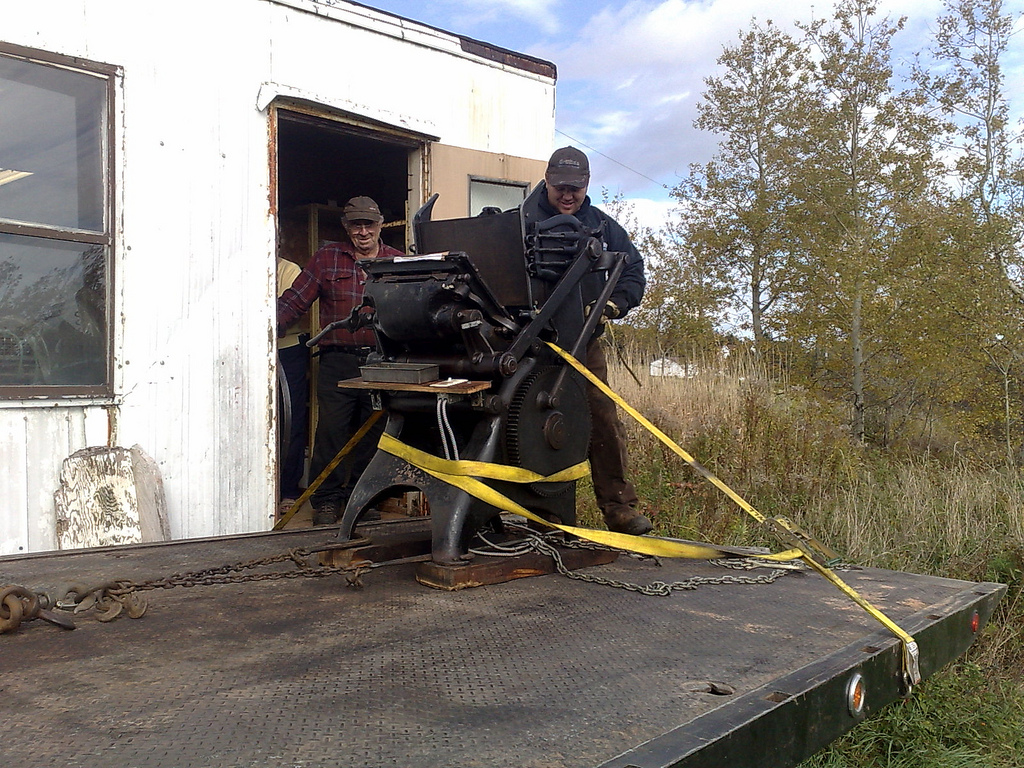 With new-found knowledge of the Golding’s heaviness, and given that I didn’t have a crew of skilled burly movers at the ready to help negotiate into a Queen Street basement, I happily took Griffin’s offer of leaving the press in an disused corner of their shop in Clyde River until alternate arrangements could be made.

And so we set off, tow truck and letterpress leading the convoy, me behind (and thus the victim of any freak cable snap sending 1500 pounds of Massachusetts-crafted iron through my windshield). 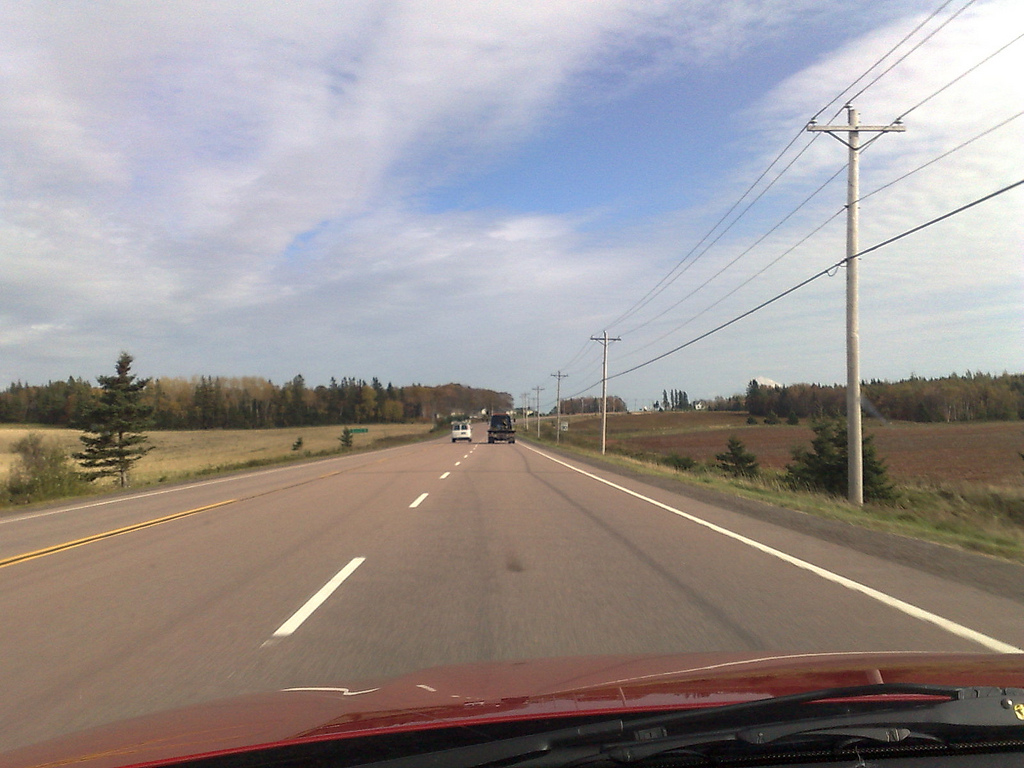 Lessons learned: I know absolutely nothing about how much things weigh; you need serious kit to move 1500 pounds of iron; Griffin’s Towing is quick, efficient and super friendly and if I ever need anything big or heavy moved, they are now my go-to guys; Bill and Gertie Campbell are among the most kind, good-humored, and patient people I’ve ever met.

If you had any advice on who to turn to for moving a really heavy something into a tricky basement location, please let me know.

Apologies to those that tried to comment: my over-zealous anti-spambot defences went a little crazy and started rejecting EVERYTHING. Should be okay now.

Pretty impressive process. I think the press should be on street level in full view like a fishbowl. I realise there is some reason that we have so many empty buildings in Charlottetown, and that this is a hobby for you. I can’t help but think how interesting the set-up is at NSCAD with their little shoppe to the side of it.

When is Steven Garrity going to become president of the world? I am sure he would help you out! Can we out a rush on that Steven?

I hear there might be a Manitowoc 16000 available in the area:

I am happy to find it. Thanks.

visit to my site , collaboration software