In the fall of 1992 I was living in Peterborough, Ontario doing freelance design work after almost 2 years spent in the composing room of the Peterborough Examiner newspaper. Catherine and I were living in a spacious apartment on Hunter Street. A few months later we’d leave Peterborough and relocate to Prince Edward Island, so what ended-up being my last design job was to design a season poster for Artspace, the artist-run centre that, at the time, was based in the Market Hall downtown.

It was a happy accident that I got the job: Artspace was in transition that year and, if memory serves, had no staff for a time. So I could get away with a lot, and had no “branding guidelines” to stick to. Nor, indeed, any oversight at all, excepting the very flexible, accepting imagination of board member Lynn Cummings, whose responsibility it was to have a season poster designed.

By lucky happenstance, I happened to be browsing a book in the Peterborough Public Library that week about the history of the city, and I came across a photo of the central block around the Market Hall being redeveloped into Peterborough Square, one of the many downtown-redevelopment projects that afflicted (or saved, depending on your point of view) urban cores in small-town Ontario in the 1970s. All of the buildings on the block, save the Market Hall, which was to remain, had been torn down. The site was empty. The block, for some rare months, was free of any business activity. 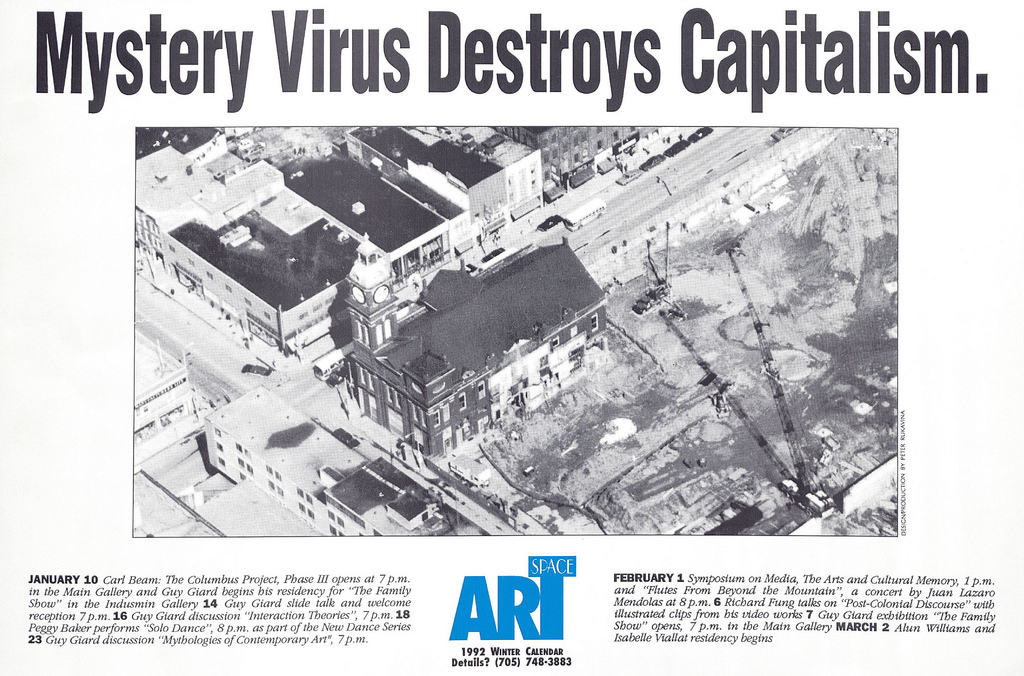 I figured if I was being irreverent, I might as well go all the way, so I took the opportunity to design a new logo for Artspace while I was at it. The new logo didn’t take – as far as I know, this was the first and only time it every appeared in print.

The poster was printed on glossy 11” x 17” card stock and distributed liberally about the city.

It was the most fun I ever had doing graphic design, and the only time I think I ever managed to capture a small slice of the zeitgeist in my work.