When the community gathered to remember Josh and Oliver Underhay two weeks ago, Josh’s wife Karri, and his brother and sister, Mitch and Sara, asked people to share how they met Josh:

Both Shea and the Underhay siblings urged members of the community to share with them memories of Josh and Oliver.

“Everyone here has that story of the first time they met Josh. We don’t. We don’t have that. Josh was as real as gravity,” Mitch said.

I met Josh only once, on November 8, 2018. He was one of the “Old Greens” at a meeting of the Young Greens. He was already the candidate for District 9, and was there to talk to those-under-30 assembled about how they could help with the Green campaign and, more generally, what being a member of the Green Party meant.

Being old, and not-yet-even-Green myself–I was only there to support my son being there–I was loathe to do anything more than quietly sit in the back corner, biting my tongue against the urge to comport myself as a wise elder.

But Josh introduced himself to me, and we had a chat about water and electricity and open data. We made tentative plans to get together to talk in more detail.

Then, save for spotting him playing the trumpet at a Green event in Summerside the week he died, I never laid eyes on him again.

The day after Josh and Oliver died I was at Green Party headquarters on Water Street when a group returned from the Haviland Club where friends had gathered to support each other.

I don’t believe I’ve ever seen sadness etched as deeply on faces, and that sadness, and the waves of sadness and remembrance, joy for two lives lived and unfathomable grief for their ending, became a proxy for me to come to understand more about Josh and Oliver. I didn’t know them but, through the eyes of others, I came to know their radiant reflections.

I have thought of Josh and Oliver many times a day in the weeks since, and I’ve been working to try to find a way to channel those feelings away from two dimensional sadness into three dimensional promise. Karri pointed the way in her words at the gathering:

Since the accident, Shea said many have asked her what they can do to help her and her three-year-old son Linden.

“Here’s my answer: Please don’t let their deaths be only a senseless tragedy,” Shea said.

“Let them be a call to action and a catalyst for a change that you make in your life. For Prince Edward Island, for the world. Plant a tree, donate blood, put solar on your roof, buy an electric car.

Shea also urged supporters to “love wildly and with abandon” in memory of her son Oliver.

Last week, on Saturday, I was heading to the Farmer’s Market by myself. It was slightly overcast, but not raining. Spring was in the air. So I pulled my bicycle out of the basement, pumped up the tires, and rode up University Avenue to the market, rather than taking the car.

Last Monday I stopped at MacQueen’s Bike Shop after my morning school run to talk to them about the possibilities of human-powered transport for getting myself, son, and service dog from downtown to Stars for Life this summer.

On Wednesday I joined the Green Party of Canada and resolved to help get Greens elected federally this fall.

On Friday I offered to join a provincial Green committee that’s setting out to make policy about making policy.

I’ve finally broken the habit of letting the water run while I’m brushing my teeth.

What I have started to do, in my daily life, is that when I’m faced with small forks in my road–take the car or take the bike? watch TV or join a committee? have a nap or call my mother? order pizza or learn to make pizza?–I will take the fork that, while it might be a little harder, require a little more effort, might take me out of the realm of things I’m comfortable doing, is the fork that’s best for my family, my community, and the planet.

In all such decisions, standing at those forks, there’s a little burst of energy needed to launch out of the orbit of habit and comfort.

I’ve come to call that little burst of energy an Underhay.

And that, for me, has been the way forward. 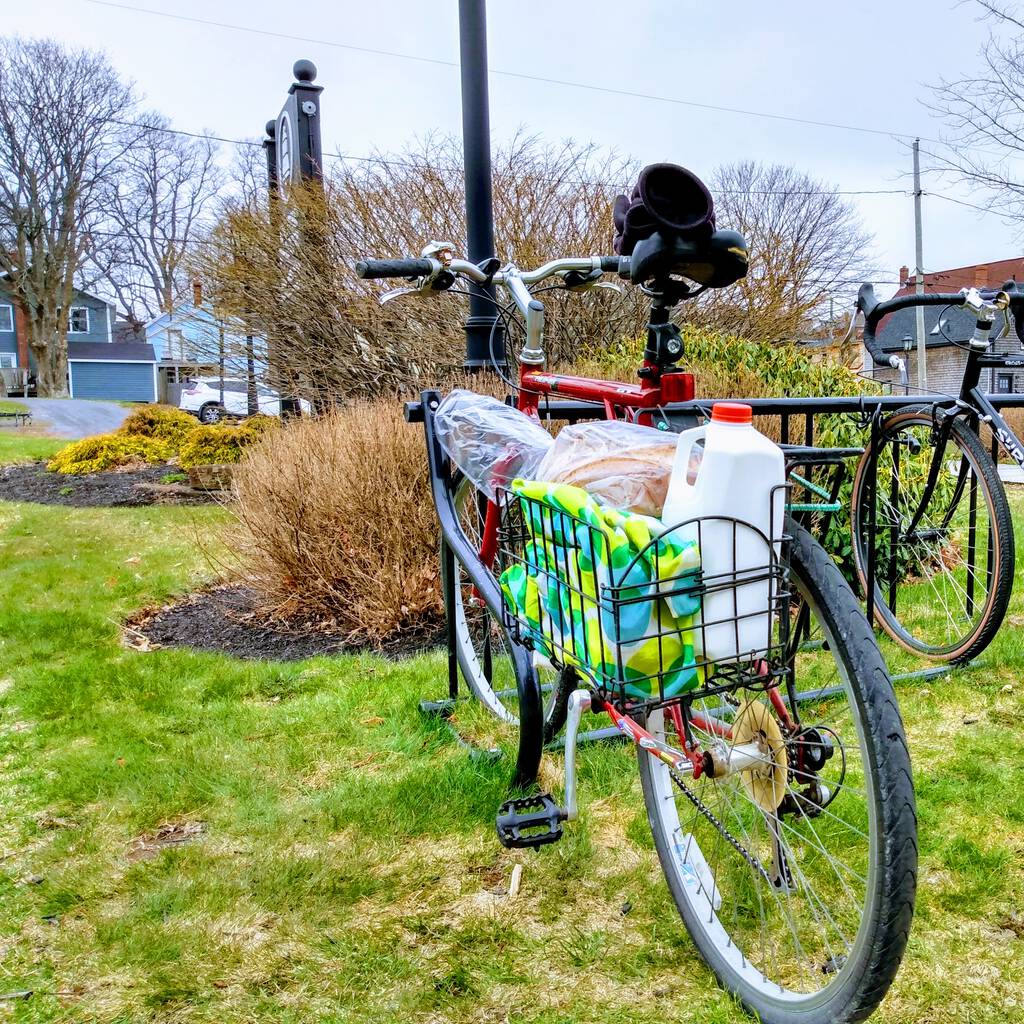 I don't know Josh much better than you, Peter, but I very much appreciated getting to know him a little. This is a most wonderful little tribute.

Thank you Peter. Josh and Oliver were good friends of our family. I've similarly been making different, Josh-informed choices in the weeks since they passed. And now I know to call those moments and bursts of energy 'Underhays'. :) Delightful.

I’ve also been trying to consider my choices through an “Underhay” lens, which also led me to MacQueens with my family. While there, I noticed a memorial pin on the counter. And got to hear a story about how Josh had been in just days before his death. A nice little confirmation that I was on the Underhay path.

I can't pin point my first encounter with Josh, bit it's been more then a few years now. As many did with Josh, your first encounter, you knew you just met someone very special. One of the many things I loved about Josh, was his extremely humble manner.
Earlier this year when I started The Great Green Blood Drive, Josh and must of chatted about him making his first donation at least four times. The close he got to donate day, the more anxious he got, but he refused to give in. He said he wanted to do it for me, as he really appreciated my efforts. Knowing who Josh Underhay was, this made me so proud. Josh called me on D day, saying he was going in, and he wanted to thank me for helping him to step outside his comfort zone. I thanked him, and said how proud of him I was, as I knew giving blood can be very traumatic for some, and he was one of those people.
Well Josh gave his blood, and was physically I'll for at least two days afterward. He ended up missing important campaign time because of it, but he still put up a photo on Facebook of him donating blood for the first time, and he gave special thanks to his father, and me for giving him the strength to donate.
That post meant the world to me, because I knew what a strong man Josh Underhay was. More then he knew himself. There were a many other times we leaned on each other before, and during the 2019 campaign, and I'll cherrish those moments for ever.
I use to be an avid cyclist up untill the last two years, and thanks to Josh I've decided to push myself again, and have been back on the trails.
For the short time I had Josh in my life, I feel he was the little brother I never had..
Love you my friend ❤️

OMG. This makes me cry. Grateful to you for writing such powerful words. Many of thoughts have been swirling around for me.

What a lovely tribute Peter.
What an impact Josh and Oliver made in their few years. I am trying as well.
Thanks so much.

I never knew Josh and Oliver, but from the outpouring of love for them from all over, I feel that I did ☺.
Two beautiful souls who did their part in making a difference has prompted myself and many to follow their footsteps.
Thank you Underhays ❤

I first met Josh 12 years ago, as he was a longtime childhood friend to my partner. I was always astounded by his energy and passion for life- an energy and passion that seemed perpetual and unending. And it hasn't ended- that energy and passion has inspired so many bursts of "Underhays" in so many. I've also pumped up my bike tires, made an appointment to donate blood, researched the most ethical and environmentally-conscious dairy alternatives, and switched back to mostly vegetarian eating. I miss Josh and Oliver immensely, and will do my best to include perpetual and unending Underhay passion and energy in my daily life.

Thanks, Peter, for taking a lot of swirling emotions (especially of of those who knew him) and good intentions, and making something personal and public; a descriptive and useful balm.

A lovely tribute. Thank you for this.

Such beauty and truth in your writing. Thank you for this lovely tribute! What a legacy Josh has left. I often hear “I didn’t know Josh and ever since his death...” they would then go on to say some positive change they have made in their life. He is an inspiration in death as he was in life. I too have been making these changes and now I know them as an “Underhay” moments. Thank you Peter. Much love to you,Catherine and Oliver.

Lovely thoughts Peter. Thanks for taking the time to write this.

I am Josh and Oliver's auntie. Thank you all for your lovely words about our boys. We needed this today.

Well done Peter ..... one thing I did was switch to a company that makes laundry detergent in the form of a strip of paper. No more large plastic containers of laundry detergent. www.dizolve.com Also it is from a Canadian Company! I try to buy local where possible, etc. Cheers ...... Barbara

This is beautiful! My 'Underhay' came on election day when I was planning to complete a Student Vote activity with the students of Bluefield High. The materials to run the Student Vote had not arrived. Given the missing materials and still feeling raw about what happened to Josh, I thought - maybe I will cancel this. But then I knew that Josh would never have lost a chance to share democracy with anyone - old or young. So we did go through with the Student Vote. It was an awesome learning experience for everyone. Thanks for giving me a chance to share this...I didn't see Josh everyday but I sure do miss him.♥️

Thank you, Peter, for this lovely and loving tribute to Josh and his son. Your small (and not so small!) steps toward doing what is the best for the planet, while honouring the things Josh espoused, are inspiring. Let us all be driven to be Underhayed.

Thank you Peter. I have been thinking about Josh and Oliver a lot over the past few weeks and I think the tribute is beautifully done. I will be channelling the 'Underhay' effect in everyday moving forward. <3