The Complete New Yorker DVD was released last week. As an avid reader of The New Yorker, I’ve been anticipating its release all summer long; my copy arrived a few days ago, and I’ve been itching to crack it open but haven’t found a spare moment amongst all foliage, elections and BASH hacking.

In the meantime something interesting has happened: if you do a Google search for New Yorker DVD you’ll find one of my earlier blog posts is the first result. It’s higher than the magazine’s own page about the DVD, and higher than Amazon.com’s product page: 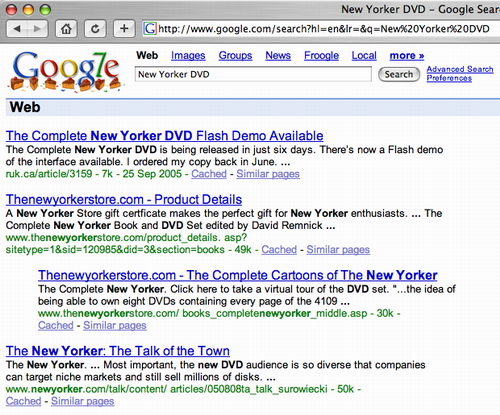 Back at reboot all the talk was about “the long tail” and I’d no idea what it meant; over lunch, Dan and Steven helpfully explained that it’s about the long drawn out part of the “power curve.” Steven’s example was that the total revenue to Amazon.com from selling one or two copies of obscure books millions of times over exceeds the revenue from selling millions of copies of Danielle Steel books (and the like).

Presumably this also pertains to marketing: Johnny said that everything he knows about the New Yorker DVD he’s learned about from weblogs, not from the “formal” publicity campaign. I wonder if they’ll sell more copies because of thousands of little mentions by passionate bloggers than from their full-page magazine ads.

Note to the New Yorker: people are going to search Google for “New Yorker DVD,” not for “The Complete New Yorker Book and DVD”.

Peter, the “long tail” concept is well introduced and described in the article “The Long Tail” by Chris Anderson in the October 2004 issue of Wired Magazine.

Isn’t it justly so as it is one of those silly ideas that can never be wrong. A collectivity that evolves through individual choices is always going to be based on a very complex set of factors. All the long tail does is distort the past fact of that complexity to say the present complexity is actually new, which it isn’t.

I knew there was a reason we banished you to Ontario, Alan.

Having a pin when others only have ballons is never a respect place.