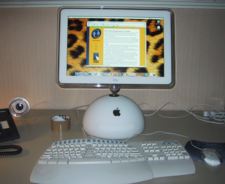 A call came on Thursday from Friendly Dale at little mac shoppe letting me know that my new 17” iMac computer had arrived. After three months of hunching over my little laptop, finally I will again be able to work at a Real Computer.


Part of getting the new machine up and running was installing the software I use day to day in my web development work; I’ve had about 6 months of serious Mac-based worked to put together a toolkit of useful applications that suit the various tasks I face every day. For the benefit of others who may be considering a switch to Mac OS X, here’s a summary:


BBEdit — Simply among the best text editors I’ve ever used. I used UltraEdit on the PC for years and years, and BBEdit is at least its equal. You can download and use a “lite” version for free.


SQLGrinder — An SQL schema browser and query editor that interfaces well with both Sybase and MySQL (using JDBC for both), the two database environments that I live in.


VNCThing — VNC client software that lets me screen-share with Windows boxes (like my old PC in the basement). It’s got a few rough edges, and doesn’t use the Mac OS keychain facility to save passwords, but it’s currently the best of the VNC client breed on Mac OS X.


MacLinkPlus Deluxe — Opens and converts files from any PC application I’ve thrown at it. I use it mostly for converting from Excel, Word and WordPerfect to AppleWorks.


Canvas — I used Xara on the PC for a long time, and grew to love it. Canvas isn’t quite as capable or smooth as Xara, but it’s pretty close. I use it for the tasks that normal, richer people would use Illustrator or Freehand for.


GraphicConverter — An excellent, very mature German program that’s a cross between an image editor and an image format converter, and does both tasks well. It replaces PaintShop Pro for me, which I used on the PC for the same tasks.


MacSFTP — A secure file transfer program from France. Well integrated with BBEdit. I started to use SecureFX on a PC for this task, and MacSFTP is its equal. Can be automated with AppleScript, which is a nice touch when I want to automate file transfers.


Chimera — This is a lean, mean version of the Mozilla browser, tuned for OS X. It’s the best browser I’ve used on any platform: it’s fast, standards-compliant, and has all of the features I need to make it my day-to-day browser.


There are several additional applications that were standalone on the PC but that are built-in to OS X. The OS X Terminal is excellent, and the OS comes with SSH, both client and server (based on OpenSSH) so secure terminal access is a breeze. I use the Apple Mail program for email; it’s got great junk filtering capabilities, and works very well with my IMAP server.


The only thing I’m really missing, business-wise, is a good and simple accounting package. I used Quicken for Home and Business on the PC (basically “regular Quicken with invoices, payables and receivables”, falling between Quicken and QuickBooks); Intuit never developed this for the Mac. There’s strong evidence that they’ll release a Canadian OS X QuickBooks shortly, and if it looks up to the task, that’s probably what I’ll use; otherwise I’ll make do either with a VNC to the old PC-based Quicken, or I’ll downgrade to regular Quicken 2002.


The new Mac has a wonderful wide screen, and is a so much easier to stare at that my work life is bound to improve. The only downside is that I think I’ll need a new chair and light to match.

The Zend IDE (http://www.zend.com) is great, and runs smoothly in X. Besides that, You’ve mentioned most of what I use, and given me some apps to check out. SQLGrinder will let my stop using my PC for MySQL-Front

I’ve demoed Zend Studio, which, as you say Jevon, does work in OS X. However it doesn’t yet run “native,” so all of the widgets are “X11” widgets not “Aqua” widgets. My contact at Zend tells me a native OS X version of Zend Studio is a strong possibility.

As far as I can tell, it’s not X11, but rather Java, and those widgets look like they could be the AWT toolkit, with a bad face.

Which means, they could go swing and at least “look” X native very easily (Borland claims it took two days to go from their Windows JBuilder product to OSX version — both are very snappy).

That being said, I’ve looked past the uglyness for now (and having to convert the windows shortcuts to X).