The first time I ever touched an Apple Macintosh was the fall of 1984. I was a high school student embedded in the Ontario Science Centre, a position which afforded the privilege of 24/7 access to the building and its many wonders.

Somehow our tiny cabal of students managed to secure a “master key” that opened every door there, and it was behind one of those doors, a temporary cabin that had been set up in an unused exhibit area, that we came across a collection of Apple Lisa and Macintosh computers; the Lisa had been released the year before, the Mac just that January. We figured out to turn them on. And I was immediately mesmerized.

For context: I’d just that same month purchased a new PC for my own use, a Sanyo MBC-550 that existed in a mysterious realm between a bona fide IBM-PC and a completely proprietary computer; it ran a flavour of MS-DOS, and operated just like a PC. Or at least just enough like a PC. Many essays were typed on that computer. And many BBS systems were dialed into.

But that computer was nothing like the Macintosh: there were no graphics to speak of (Windows 3.0 wasn’t to be released until 6 years later), and so whereas at home it was all backslash-this and backslash-that, in the secret Science Centre Mac lab I got to use a mouse, a desktop, a drop-down menu, and all the other innovations that, 33 years later are still very much part of how I use the MacBook Air upon which I now type.

All of which is to say: isn’t it great that, thanks to the Internet Archive, you can now run a classic Mac in a web browser! 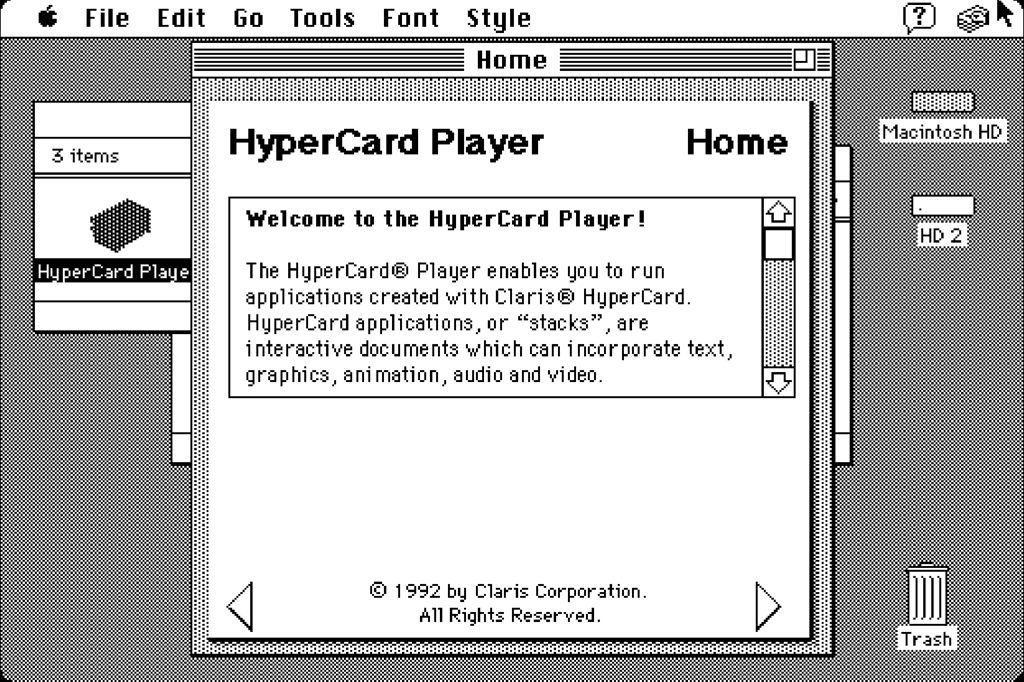 Some years later, at Trent University, I had more permanent access to a Mac, and got to dive deep into HyperCard, the hypermedia authoring tool that still, all these years later, so many of us from that day pine for lovingly. HyperCard was, for me, the gateway drug for everything that I’ve done since: the agency that it gave one to shape digital information landscapes was profound. This 1987 episode of The Computer Chronicles–also hosted by the Internet Archive–is a delightful look into the mind of Bill Atkinson, the man who created HyperCard, and about the uses it had been put to in those early days, including an effort to digitize The Whole Earth Catalog.