Having failed to obtain cappuccino this morning, I launched a special follow-up mission at 11:45, integrated with lunching with Dan and Steven. Our destination: The Marketplace Café, the restaurant arm of Bruce MacNaughton’s multi-tentacled downtown retail space in the old Woolworths store. I was not disappointed: 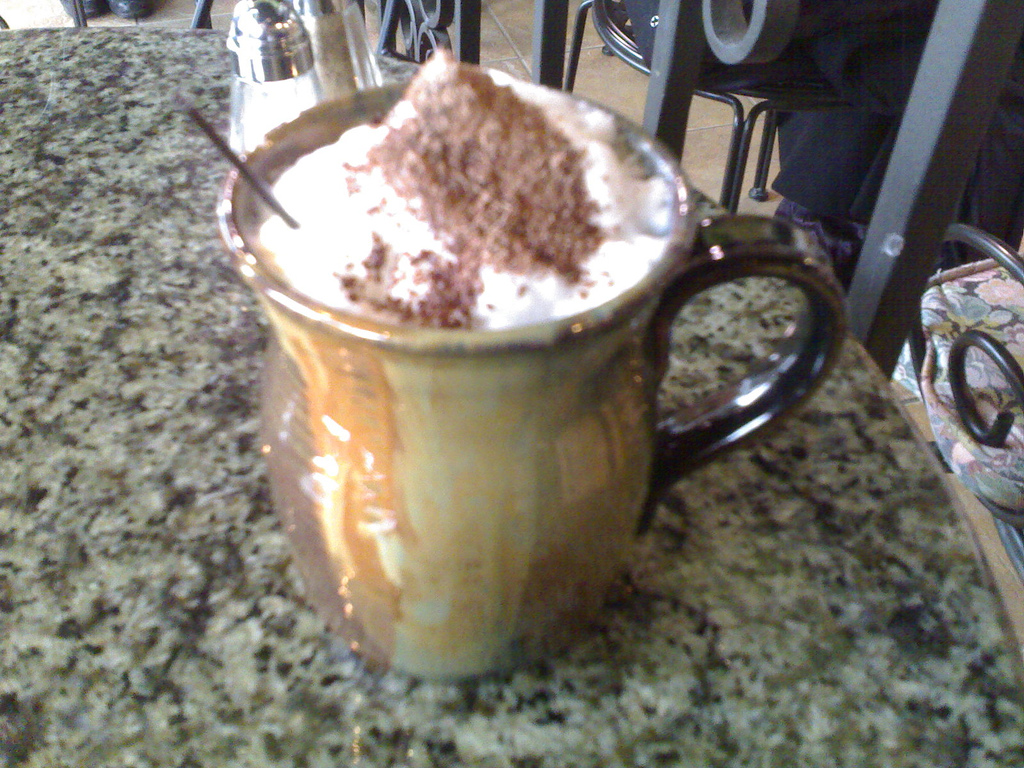 The coffee was excellent — Bruce tells me he sources it from Robert Bourgeois — and it was served piping hot in a quality Island-crafted mug. While the foam was a little too foamy for my taste, given the dreadful foam I’ve experienced elsewhere, I’ll not complain. Given the hour I had chocolate sprinkles added to the top, something I wouldn’t do at dawn; they were a nice touch.

All said, it was a pretty darn good cup of coffee; not quite hard-scrabble Italian workaday, but enough to satisfy my cappuccino fix.

Sadly the Marketplace Café doesn’t open until 9:00 a.m., thus disqualifying it from a place in my newfound early-morningness. But as a later-morning fallback, I’ll happily put it into rotation.

The rest of the lunch, by the way, was also quite good: I had a toasted club sandwich on focaccia and a bowl of cauliflower soup. This was served, pleasantly and unusually for french fry-obsessed Charlottetown, with a healthy bunch of raw carrots and celery . It was all very tasty.

I have been following your Cappuccino quest since you returned from Italy. I am not familiar with the ‘Old Woolworth’s store’. Would you mind posting the street address of the The Marketplace Cafe? It sounds like it could be worth stop in.

The Marketplace Caf&eacute is at 133 Queen Street, near the corner of Grafton, opposite the Confederation Centre of the Arts.

I appreciate your comments regarding your experience at our, Marketplace Cafe. I just need to make two wee clarifications. One is that we open at 9 am, 10 am on Saturday…but we are working on some new exciting menu concepts that may see the hours expand. The other note is on who roasts our coffee…our coffee is roasted by a gentleman named Robert Bourgeois, for
those who have purchased their beans from The Root Cellar will be familiar with his quality.

I want also to take up your space and wish everyone the very best this Holiday season and may all the goodwill that the season stands for be shared deliciously with your readers.

Thanks for the update, Bruce — I’ve updated the post accordingly, noting Robert Bourgeois coffee and your 9:00 a.m. opening time.

A 7:00 a.m. opening time would guarantee at least 3 or 4 morning visits a week from me.