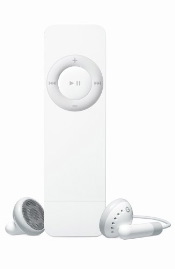 for almost two months now, and I thought it was time to share some of my impressions.

Form-factor. It’s hard to get a handle on how very tiny the Shuffle is until you hold one for the first time. When Apple compares it to a “stick of gum,” they’re being literal, for that’s about how big it is. It’s also very light. Every person I’ve showed it to remarks on how small it is compared to what they expected. I had a regular old iPod

for several years, until it stopped working; while it was small too, it was “deck of cards” small, and when it was in my pocket, I noticed it; I don’t notice the Shuffle at all.

Controls. There are two controls on the Shuffle, one on the front that controls play / pause / reverse / forward and volume, and another on the back that is the on / off switch and controls whether the unit is in “playlist” or “shuffle” mode.

The front control is very well designed: I often use it in the dark, and it’s textured enough so that I’m never confused. Although there are only two physical pieces to the control — an inner circle and an outer ring — those two parts do a lot: everything from locking the controls (press and hold the “play” button) to “fast forwarding” while playing (press and hold the “forward” or “reverse” buttons while listening).

The on / off control at the back is the Shuffle weakest design feature, for two reasons. First, although the control is made out of the same smooth plastic as the rest of the unit, so unless you’re wearing rubber gloves, it’s too slippery to control easily (a slightly wet finger helps). Second, the “playlist” mode requires moving the switch halfway on, which is neither intuitive nor very easy to do without practice. Adding some texture to the button, and a better “switch position” mechanism would help here.

Random Shuffle. Although Apple has been marketing the Shuffle as a “listen to lots of random music” player, I seldom use it with music: I use it to listen to audiobooks and podcasts. As such, I use its rarely mentioned non-random “playlist” mode to listen to songs. I generally load it up with 10 to 20 podcasts, and then simply listen to them in order. For reasons I don’t completely understand (regular old iPods don’t do this), but which I find very helpful, if I turn off the Shuffle mid-program (or mid-song), it starts back up right where I left off when I turn it on again. This is great for listening to podcasts in more than one sitting.

No display. The biggest difference, besides storage mechanism and size, between the regular iPod and the Shuffle is the lack of a display on the Shuffle: the only visual feedback on the Shuffle is two LEDs on the front (used for things like “okay, I see you pressed that” and “I’m charging now”) and an LED on a button on the back that, if pressed, gives an indication of the battery’s charge. I thought I would miss having a display, but now that I’m used to it, I don’t really mind at all. I never really used the address book, calendar, clock and games functions of my large iPod; if I was used to those, I might miss the display more. And because of the way I use the Shuffle — more of a “take some audio off the PC for a while” rather than “hold my hole music library” — I don’t really find myself needing to “look things up.” The only drawback I’ve found of not having a display is if I have a couple of dozen podcasts on the Shuffle and want to listen to a specific one, I have to jump through the playlist until I find the one I’m looking for; having a display would mean I could jump right there, but I’m willing to take the hit for the size, lack of fragility and increased battery life.

Syncing. There a small plastic cap on the end of the Shuffle; pull it off (it’s sturdily connected with a ball-bearing mechanism, and doesn’t seem prone to falling off on its own) and a USB connector is revealed that lets the Shuffle plug right into the USB port of a Mac or PC. On my Mac I’m using a Logitech cordless mouse USB extension cable that I didn’t need for the mouse itself; this lets me sit the Shuffle right out by my keyboard rather than having to reach around the back of the machine.

The Shuffle needs Apple’s iTunes to sync up music from the host Mac/PC. Apple made some clever modifications to iTunes to accommodate, adding a feature called “Autofill” that lets you set how the Shuffle gets filled up:

In this example, I’ve got iTunes set up to fill the Shuffle with audio from a playlist called “Podcasts” that I’ve created. Autofill is most useful, of course, when you have more music on your PC or Mac than room on the Shuffle; with it, iTunes selects a “random mix” of music, and fills up the Shuffle with as much music as there is room.

Without USB 2. My older iMac 17” doesn’t have a new USB 2 port, which means the transfer of audio from the Mac to the iPod is a lot slower than it would be otherwise, something I worried about before purchase. This hasn’t proved to be problem: a couple of hours of podcasts takes only a couple of minutes to transfer, and because I generally leave the Shuffle plugged in to charge anyway, I don’t even notice that amount of time.

As a Thumb Drive. There’s a setting in the iTunes configuration panel for the Shuffle that lets you set aside a certain amount of the storage space in the unit for use as a USB “thumb drive:”

Once you set aside some space for “disk use,” the Shuffle appears on the Mac desktop every time you plug it in, just like a regular USB “thumb drive” does, and you can copy files to it and basically treat it like a floppy disk or hard drive:

I’ve used this feature a couple of times to transfer documents from work to home, and I carried around a set of basic reference files and applications on the Shuffle on a recent trip to France just in case I needed a copy of Firefox or my address book on a foreign computer.

Battery Life. As the Shuffle has never run down, I’ve got no real experience with its battery life, other than “it seems to last forever and ever.” I’m not a heavy user — an hour or two a day at most — so I’m not sure how often I would need to charge the Shuffle if I was wearing it around all the time.

Sound. I’m not an audiophile, so whether the Shuffle reproduces music well, I cannot say. The audio of podcasts, which tends to be fairly lo-fi, is just fine. I alternate between the included standard white iPod earbuds (more comfortable than you would think, but a lot of “sound leakage” if you have neighbours) and pair of Shure e2c

in-ear headphones (which cut out a lot of the noise in a room — or on an airplane, which is especially nice): the sound is equally fine for me with either.

Conclusion. Because the iPod Shuffle

is so much smaller than my old “bulky” iPod, I’ve found myself carrying it around a lot more. I listen to it a lot when I’m falling to sleep, and I don’t have to worry about dropping it, or rolling over on it. I bought the 1GB model thinking I wanted to be able to hold a lot of stuff; I find I could have made out just as well with the 512MB model, as I’m never away from my Mac for long enough to need than much audio on the Shuffle. With the exception, noted above, of the slippery back switch, I find the controls easy to use, and I don’t miss the LCD display of the larger iPods at all. For my use — a portable, lightweight gizmo to listen to podcasts on — the Shuffle has fit the bill well.

You’re right about forgetting it. Several times I’ve been looking for it around my flat, only to find it around my neck.

Ignore the people who whinge about it not having a screen. How often do you really use a screen anyway? I wear mine under my T-shirt. I can pause/play (useful for finding out if I’m on the wrong train), skip tracks or turn it up/down with a simple touch just by feeling the grooves on the buttons. Unlike the moaners with their big ipods, taking it out of their pockets and reading what the screen says — that just screams “mug me!”

Oh, and if you’ve got a regular iPod, never EVER adjust the volume on the bus if you keep it in your shirt pocket. It looks like you’re rubbing your nipple and everyone looks at you funny.

I use my shuffle for gardening. I sewed a kangaroo patch in the top of a baseball cap and viola, my red sox shuffle hat is PERFECT. I can even control it with the hat on as the button side can be up. AWESOME!!!

Thank you very much! This was a lot of help because there’s this thing were you take a test drive and win a free iPod Shuffle. So, I did learn a few thigs about the Shuffle. Except, I just need to know how many songs your Shuffle holds.

it’s great, but i still want the screen. I guess i just find “rubbing” the button is fun lol

i love my i-Pod shuffle! It’s handy and great!
The only problem with mine is that it only holds 118 songs. I need many more than that.
So if someone can tell me any way to compress the files into mp3 that would be great…=)

i disagree with my first and last apple product! I just bought a ipod shuffle (the one 1gb version) and the USB port of it pulls out and exposes a flat metal wiring. it is now easily pulled out…..kinda sucks!

I-shuffle is an awesome little machine. Down side : the controls are only on the headphones. They break, you’re done. Time for new APPLE headphones. I still prefer the old shuffle with the controls on the unit.

So i am thinking about buying one of these as they are cheaper and seem simple. The only thing i was wondering is i buy alot of audio books from www.audiobooks.net so would it be hard to put them onto the shuffle…also is it hard to navigate (in this case through an audio book)