Remember ALLEX and ELSIR and the Fish Points, two rabbit holes I fell into earlier in the week?

So ALLEX and ELSIR, it turns out, are 5LNC – five-letter name codes. These codes, says the document, play the following role:

Where a significant point is required at a position not marked by the site of a radio navigation aid, and is used for ATC purposes, it shall be designated by a unique five-letter pronounceable “name code” This name code designator then serves as the name as well as the coded designator of the significant point.

These codes need to be unique and they need to be pronounceable – the “name code designator shall be selected so as to avoid any difficulties in pronunciation by pilots or ATS personnel when speaking in the language used in ATS communications.” This makes sense, as so much of the role of these codes is to be spoken over scratchy-sounding radios. That’s why ETHAN is unlikely to become a 5LNC.

But where do the five letter name codes come from? I found the answer to that buried in a screen shot inside an ICAO manual about the ICARD maintanance system:

“The 5LNC codes,” says the manual, “are drawn from a set of pre-defined five letter combinations generated by ICAO and the FAA in the 1960s. This list was then split and distributed to the various ICAO Regional offices throughout the world.”

The ICAO has a very helpful public GIS system that allows exploration of the ICARD and 5LNC systems; and it turns out there are a pleasant number of 5LNCs right here in the Charlottetown area, including NOVIP, VOLUG and HOWLE: 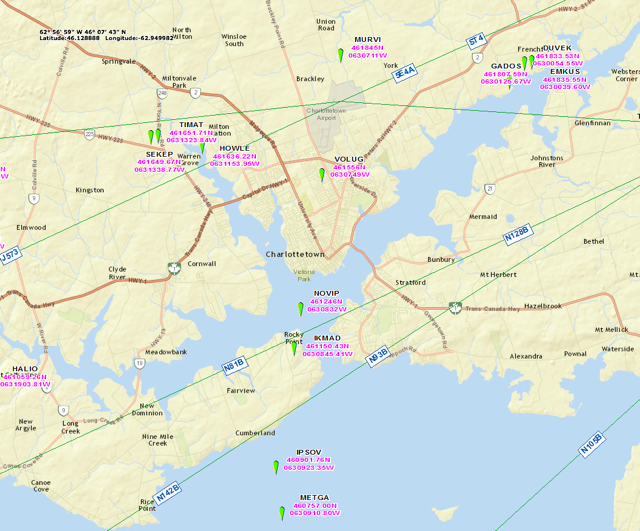 ICAO also has a public downloads pages for the ICARD system that lets you dump all the 5LNC codes allocated to a given country. Which is how I know that Canada has GOATS, TUSKY and ZASER in our hands.

You may find these interesting as they associate the “fixes” to different approach options at YYG.

Very interesting, Brady. Thanks for the pointer.