There’s a provincial general election here in Prince Edward Island on October 3 this fall, and over the past month here at Reinvented we’ve been ramping up the technology side of the Elections PEI operation as planning and preparation for the election is now in full swing.

In each of the Island’s 27 electoral districts there are three advance polls dates – September 24, 26 and 30 if you want to mark your calendar now – and these are held in a single central location in each district. Because votes are cast and tallied on a poll-by-poll basis, with multiple polling divisions in each district, one of the challenges at these advance polls is to route electors arriving at the door to the proper table to vote for their particular polling division.

In New Brunswick, both for the advance polls and on election day, they use laptops loaded up with an address database for this task: poll workers enter a street number and name and an application running on the laptop returns the polling division.

We used a similar system here in Prince Edward Island in the 2007 provincial generation election for the advance poll in Charlottetown – just a single laptop in a single advance poll – and it worked well, and after observing the New Brunswick election in September we started to develop a plan with Elections PEI to equip all 27 advance polls with laptops and look-up software.

It turns out to be surprisingly hard to source 30 laptops (one for every district, plus spares) for just a week. Purchasing inexpensive netbooks – in the neighbourhood of $300 each – would come to $9,000. And after election day you’d have $9,000 worth of obsolete laptops. Renting laptops was not that much less once you factor in minimum rental periods. And that’s only the hardware: the cost to develop the database application, to train poll workers to use the hardware and software and to make sure technical support was available would have at least doubled that.

Once the cost and complexity of this plan began to emerge, we collectively took a deep breath and realized that we were trying to solve with complicated technology a problem that could more easily, cheaply and effectively be solved with, well, paper. Witness: 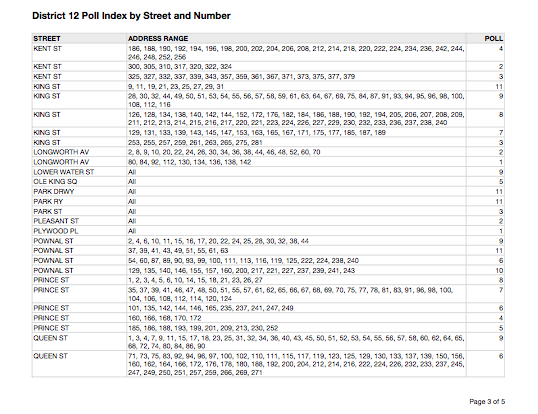 That’s a single page of a simple 5-page index to District 12, a district with about 2,000 addresses and 3,100 electors. To find the right poll, the advance poll worker just asks the elector for their home address, scans down the alphabetical list of streets to find it, and then scans for the right number (we experimented with replacing address numbers with address ranges, but the complexity of poll geography meant that the result was more confusing than helpful).

Twenty-seven districts, a five or six page index for each district, and about an hour to create the report means that the entire “system” (if you can call it a “system”) cost less than $100, requires a few minutes of “training” and is guaranteed not to crash.

A good day at the office.

I love our Canadian elections.
Nothing much simpler than marking a piece of paper with a pencil to vote, either.
I think everyone should be a scrutineer for at least one election — it’s very illuminating.

I love reading stories where simple paper solutions beat out more complex computer based ones. Of course you could always resell the laptops (assuming of course that doesn’t violate any privacy policies) so the total cost would not have been $9,000. Still, it would have been far more than $100 it cost just to use paper.

@Ian it just beat computers on cost — it’s not actually better since you could do the same manual lookup on a computer screen, without the pages to turn.

In India in my village we are doing this for very long time. Village is divided to Wards and one Voting Booth will be there for each Ward. People should know which Ward(Voting Booth) they belong to vote that particular Ward Member. First we will get the printouts of all voters information. Copies will be distributed to volunteered youngsters who are educated enough to read names. They all go to different corners of the village and provide the information to villagers who are going to vote. In all the villages they do the same.

Actually so simple that you don’t need programming at all.

I worked as an information officer for Elections Canada in the federal election. I used a very similar “poll book” to look up people’s polling station based on their address. It works perfectly. It’s probably faster than waking up a laptop, typing in an address (spelling it correctly), etc. And by the end of the day you know, for example, that everybody on Thoroughbred Drive is in Poll 33…

That’s how it’s been done in the state of Connecticut for generations:

After entering the polling area electors choose the table with the proper initials for their last name (A-M or N-Z).

The poll worker at that table then matches — on paper — those names along with the corresponding addresses (which determine districts).

I thought everyone did it that way.

Guys do you want to come in Greece and help re-arrange the whole political situation and the public services?

My country spends on the public services HUGE amount of money every year cause our politicians just bought votes for jobs for around 30 years now! Can you imagine how hard this is to control and make it productive?

this is excellent. i love it when people actually think about how to solve a problem, rather then getting tied up in what technologies to use, when in the end it is only the result that is important

The best solutions are often the simplest. The notion that you always need computers/software incorporated within every aspect of your life is a bit insane. I love the creativity used in finding an economical answer. Kudos for getting back to the basics.

A nice solution, without doubt, but in Australia, you can vote anywhere, and each station is equipped with a register of the electoral roll, which are used along with a pencil and a ruler to locate you alphabetically and cross you off the list after you answer a single question: Have you voted anywhere else today? Then off you go with your ballot to complete.

There are so many alternative that are currently being investigated for new voting options. I recently pitched an idea to our local precinct to use a conference calling service such as www.onconference.com or many others to poll the people and have them pitch ideas for a new solution. We’ll see how it goes.