It took me 10 years of living on Prince Edward Island before I felt capable of attending New Years Day levees here in Charlottetown. Initially I was confused about the whole idea (we never had levees in Ontario, at least not in my social class), and then later I was confused by the confounding requirement for a “calling card”: 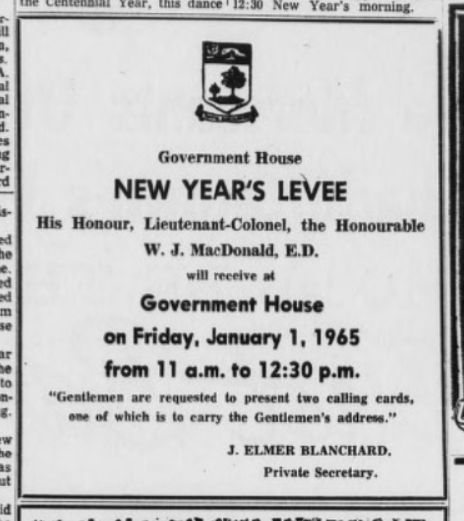 I was afraid to ask anyone what a “calling card” was for fear of being called out as a neophyte — “Why good sir, have you not a goodly supply of calling cards in your saddle bag? Forsooth every noble Islander has always one at the ready!”

It took my brave friend G., back in 2004, to get me over the hump: he convinced me that I didn’t actually need a calling card at all. And so off we went.

If you are a levee virgin, here’s a set of pointers that you might find useful to get you over your own fears and into the levee habit: 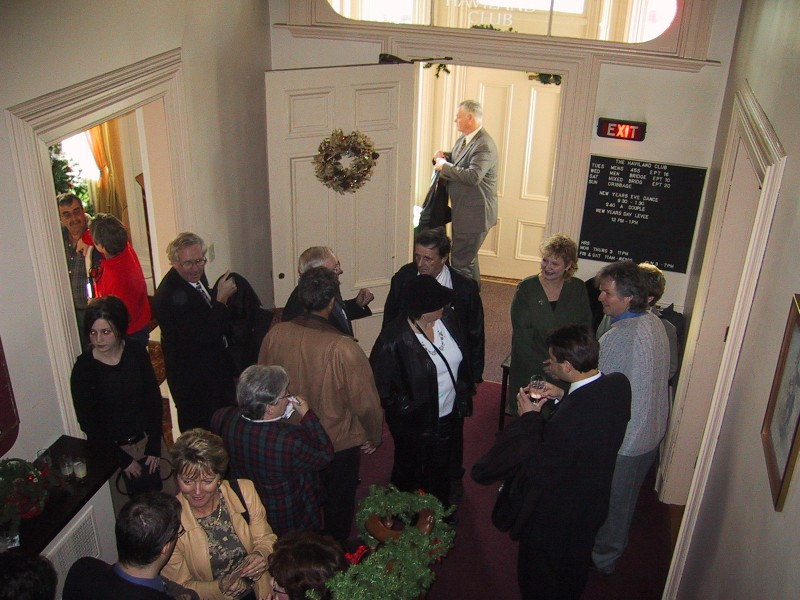 Best free drunk I ever had.

A lot of the ‘eye candy’ is mature (perhaps past their prime) but the nibbles more than make up for any other shortcomings.

This was great Peter, best overview of the levees that I have heard.

I’m surprised that you didn’t hear of levees when you were in Ontario. Each municipality in Toronto had one. We went to the East York levee every year. Good food but sometimes the wine wasn’t very good. Mayor used to bring his own home made stuff.
Now we’ve moved to Beamsville, there are some great levees. The town of Lincoln (in wine country) and three wineries are invited to display two wines each. Then the local MPP has a levee at a local winery. Great food and wine.

I’ve been attending Levee’s since my father was the LG back in the early 80’s. Other than the 5 years that I lived in Halifax, I haven’t missed a year. Always a great day.

Great idea to blog about levees Peter.
Thank you for the levee schedule, and CBC radio interview.
I too did not understand levees until the topic was researched. We have attended for approx. the past 15 years.
I’m curious to know how many years PEI’s “governing bodies” / military / Fed. / Prov. /other institutions have held levees.
Shirley S. Jay

New Year’s Day Levees are a great way to bring in the new year. So, if your able to get out and celebrate with lots of other people, come join the rest of us to bring in the sesquicentennial of the Charlottetown Conference. Happy 2014!

We have been attending levees seems like forever. We try to take in 10 or 12 (timing is everything!) We start with Lt. Gov. and end with the Premier's. Great day to get out and mix, not only with the VIPs, but with friends and family whom you have not seen in quite a while. The refreshments are usually very good and of course meeting so many friends is the best part - even if it is just a quick chance to say "Hello" and "Happy New Year"!

The Mayor is always a good one. PEI Regiment is also good. BIS is very good. And any others you have any connection to at all.

Hi i would like to come to your party

I love reading about the levees every year. I confess to a bit of levee envy! We don't have them in Vermont and I am convinced we should.

It just turned Jan 2, 2023. I only JUST heard (read) about these levee parties! Shame. We spent the day reading and cooking at home and it sounds like everyone on the island was dressed up and off to countless parties! Where is one supposed to get up-to-date information about PEI activities? We have lived here six months and would like to be in-the-know about all the interesting things going on locally so we might participate. Any suggestions you can share? Thank you!