Here’s one of the vehicles that K-ROCK and The Ocean, two Charlottetown radio stations, have choosen to use to promote themselves: 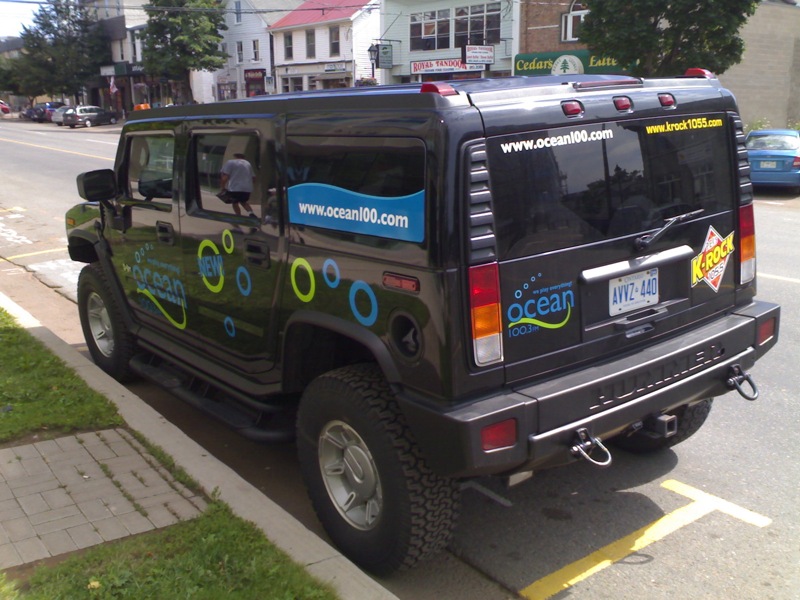 For the uninitiated, it’s a Hummer H2, a truck made by General Motors that, according to dealers, gets 8 to 10 mpg.

I know that rock and roll is supposed to be about being all crazy and rebellious, but does it really take a huge gas-guzzling truck to telegraph that attitude? For the same price — probably less — you could pimp out a Toyota Prius and get 5x better mileage.

Your license application to the CRTC talked about NewCap’s policy of providing “intensely local service to the communities it serves.” How about showing some community leadership and getting a promotional vehicle that equates “cool” and “rebellious” with something more progressive and useful than a 6,400-pound monster truck.

Will that even be able to hit the Island’s roads during the mud season when heavy vehicles are restricted?

I agree completely re the vehicle but it reflects their thinking. I never saw their managers as community leaders in terms of how they downsized, eliminated many positions and did not do anything new until the latest CRTC ruling compelled them to change (as well as the advent of satellite radio as competition). This is when they had the market to themselves except for the increasingly cut back local CBC radio station and after the loss of CIMN.

-Their predecessor radio stations were not great leaders on the Island despite the hard work of many of their employees -It seemed like the management gutted their local news and information programming while maximizing the number of ads they could sell — Despite some good local shows and their support for Eric MacEwen’s syndicated show -much of their programming was not local and orginal programming like “Old Folky Ways” was not supported as they moved to formats where the music was not programmed locally. The local people did a great job despite that there were fewer and fewer people working there at least on air. I know of many people who were forced to leave despite providing great service to the Island community over the years and many times there were few human beings in the building after hours not to mention that the news staff were trying to do the best they could with very few resources.

A prius is more “usefull” than an H2? Gimme a fuckin break lol…that prius would hardly make it around charlottetown in the winter haha. and are you guys really bothered that they didnt give a few hundred dollars to our gov’t for registration?? It sounds like you just want to find any reason to whine!

L.C., you are confusing MBS Radio and Newcap Radio. It is MBS to whom your complaints above should be directed. While CHTN was always a Newcap Radio station, it was, for a number of years (due to an earlier CRTC decision which compelled CHTN to share local resources with MBS stations), under MBS local management until the CRTC changed its ruling again and compelled them to (once again) become their own entity. I’ve worked for MBS for a number of years, and agree with your assesments. I am now working for Newcap, and can categorically state that it is an entirely different approach to radio, and to local commitment.
As for the Hummer… It’s a loaner from a Newcap Ottawa station, hence the Ontario tags. It will cease to be an affront your senses at the end of August.

Thanks Rob for the elucidation -I have always thought that MBS had gotten away with doing much too little in this market and am glad that Newcap is doing more with CHTN and its successor K-ROCK. I know way too many people who formerly worked in radio in the MBS stations who were dismissed or downsized while their profit margin must have increased with the number of ads that were being placed. I have always thought that a strong critique was needed and that the CRTC was not living up to its mandate in ensuring quality programming was being made in return for access to the public airwaves. But hey can you get your station to run from PEI windpower?

(That thing is at least as grotesque as someone who flames while hiding their identity.)

The H2 actually gets poorer mileage than the H1. Which is surprising because the H1, for you car-techies, has four fuel-sucking tourque converters; one in each wheel. Under certain conditions the H2 can sometimes give 3 MPG of “economy”. (source: http://youtube.com/watch?v=XlI….

Aside: That program, Top Gear, is a smarmy arrogant humourous bit of work, but it does manage to communicate real stuff about real cars and, in every way other than their complete love for gasoline powered cars, they really seem to know their stuff.

Prius is a joke — (source — among others: http://youtube.com/watch?v=H_5… My VW weighs a thousand pounds more than a Prius and gets, when driven sanely, over 50 MPG — that’s 10-15 better than a Prius. And I can live with the performance trade-off I’m virtually certain my slightly-under-five-ton camper van will beat the Passat in a 1/4 mile race. BTW, the camper is at least a 1000 pounds heavier than the H2, is at least 2 feet taller, yet when driven sanely will go a little over 20 miles on a gallon. They both have the same engine — it makes no sense at all.

GM has killed the H2 production but who wants to bet they bring it back as a hybrid?

As soon as the market delivers plug-in hybrids then urban gas mileage will approach 200 MPG. That will be something useful (finally). The car companies essentially nixed the idea of plug-ins but the market started to demand them and a number of after-market conversion shops popped up to convert hybrids so they now think it’s a good idea.

But, there are electric cars coming that are going to blow the doors off of anything on the road right now (that is, anything under half a million dollars) in the performance category. The will likely go 250-300 miles on a charge, some have top speeds of 150 miles an hour (if you NEED that), run on about 3 cents a kilometer, and will go 0-60 as fast as the 250-MILE-per-hour, 1000 HP, Bugatti Veyron (under 4 seconds). The Bugatti (which is actually a VW) gets ONE mile per gallon when accellerating at that rate.

I recently read (but can’t google the source right now) that the US could eliminate its need for mid-eastern oil by improving average fuel economy by 2 MPG and could eliminate the need for any foreign oil (including Canada’s) by improving it by a bit over 3 MPG. While the US does not have the largest reserves they do have the largest domestic production yet have been a net importer of oil for years and years.

… now for water… I wonder if the first world-water-war will happen in my lifetime?

Kevin, watch the documentary Addicted To Oil. It’s on YouTube.com

In the documentary award winning author Thomas Friedman looks deeper into America’s addiction to oil. He has interviews with innovators across the US who have developed many alternatives to oil driven autos. One of the teams he interviews actually developed a plug in that will go 500 MPG when used with ethanol. Personally I don’t think plug in is the way to go until America (and Canada) comes up with cleaner ways of putting electricity to our grids and actually enough power to supply each house hold.

Another great segment in Addicted To Oil is when Friedman interviews a designer who drafted a concept for green housing, brought it to the Chinese Government and was awarded the privilege to build a small village to show them that Green is efficient. Some of his houses have gardens on the rooftop. Imagine that one day we might have a house that is not connected to any power grid and our vegetation grows on our rooftops. Amazing.

They’d better send that thing back to Ontario quick! Read this:

Some would say the wheels have come off at GM. With the infamous multi-billion dollar loss posted last year, sequential multi-billion dollar losses after each quarter of 2006, and a potential Delphi strike looming large on the horizon, the euphemism certainly seems appropriate, and with recent news of Hummer H2s abandoning their front wheels as a result of failed steering knuckles, it

And may I point out to Rob McD above…I know someone who worked for MBS for many years, and according to them, CHTN was never “compelled” to share resources with Magic 93 and CFCY, but HAD to in order to survive, such was the state of their financial affairs. At that time, many, many CHTN employees were let go in a less than diplomatic boardroom affair. CHTN did what they had to in order to survive, just as every station would, and still does. Neither were they “compelled” to go out on their own recently. Their management agreement with MBS came to an end. It’s great that you have found a happier career, but please remember that good, hard working people are still employed with MBS in Charlottetown, many of whom I know personally, and they are some of the most experienced people in the business, simply working, like you, to keep food on the table. They are also still very passionate about their careers, as well. There is certainly a great “buzz” surrounding the new radio stations this week, but once the dust has settled, (and the wheels have come off the hummer) it will be back to business as usual, and CFCY AM will make their move to the FM dial, as well. Bravo!

From the Getting Let Go from a Radio Station Department: I worked in commercial radio for a period spanning almost ten years. I never met a DJ (Jock, as they called them then) who hadn’t been fired from at least one station. I suppose the one exception was Colin MacAulay (the competent son of the legondary Loman MacAulay). But I understand that he was recently axed — for shame!

It’s just part of the ‘radio biz’ to off people without warning and without cause. It’s how its been done for years and years.

Of course WKRP In Cincinnati was based on the plot bedrock of of “Getting Let Go from a Radio Station.” Booger….

Lousy suits..always sticking it to the dungarees.

Both General Motors and the goofs who buy these abortions should be publically flogged or worse for littering our streets with this Trash. Exactly what I expect from the local Radio idiots.