On Thursday afternoon a small box arrived by UPS at Reinvented HQ: my Firefox OS-driven Peak mobile phone fresh from Geeksphone in Spain: 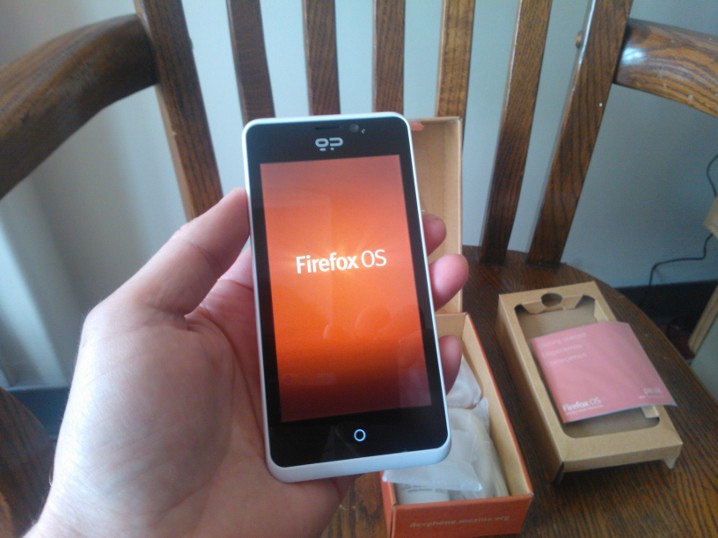 I ordered the phone because I like the idea of developing for (and using) a mobile device where I have much more intimate control than I do on  increasingly-more-intermediated phones running Android, iOS and Windows Phone. I went in realizing that this would mean, at least right now when Firefox OS is relatively new an immature, using a device that only partially worked, and that lacked the polish of devices I’m used to. With that in mind, here’s a quick “state of the union” rundown of what works and what doesn’t. I’m using the phone with the latest code from Mozilla.

What Sort of Works

That’s by no means a comprehensive list: it just reflects what I’ve tried to do in the last 3 days.

In general the phone UI feels a little rough around the edges (when compared to iOS, Android and Windows Phone devices that I am used to), but not shockingly so: it’s responsive, scrolling is smooth and not “laggy,” and although the phone has the habit of rebooting itself more than I’d like, it’s so quick to reboot that this isn’t as much of a problem as it would be otherwise (and is to be expected from a developer-focused phone).

Looks like it’s time to stop assuming the only mobile browsers are WebKit-based.

In the meantime, this responsive.css file will help: it adjusts the sizes of UI elements, and is used by the Gaia apps (like SMS) to ensure that they are rendered in usable size.

As the first devices being shipped with Firefox OS are all in the same lineage as the Keon, the larger screen of the Peak right now isn’t tested very well — and in the first version of Firefox OS, some corners have definitely been cut to manage to get something deliverable to the low-end market within the set timelines.
Also, it seems like because of the Peak not being in the v1 target lineage, Geeksphone did some creative hacking to get the builds for it up and running (which can be the source of crashes/reboots), and I hope they’ll clean that up in future updates. They’re a pretty tiny company so some things there might take a while.
That set, all the code is open, the phone is flashable and our people at Mozilla surely would be more than happy about you getting up a build of the current development versions and getting in some pull requests on fixes e.g. in the UI (“Gaia”). :)

If you get a chance, I’d be interested in the dimensions and weight (rough is fine). I haven’t seen these numbers listed anywhere.

I will need an upgrade soon and I would like to try some of the more open phone options. My geeking skills are limited. If I invested in a Peak phone would the software updates eventually solve the current problems? If it is not consumer ready now when do you expect it would be?