My walk to and from the office everyday takes me along the pedestrian mall known as Victoria Row, a stretch of Richmond Street that’s closed to vehicles in the summer months.

I have more than a passing familiarity with this stretch of street: not only to I walk it perhaps more regularly than anyone, but I was the founding president, back in 1993, of the Victoria Row Business Owner’s Association (I was the compromise candidate: as neither a shop owner nor a restaurateur – I worked for a non-profit – I was a neutral third party in situations where the interests of each were seen to be at odds).

Victoria Row has always been full of political intrigue: there was the Clarinet Man controversy, the kiosk debacle, the issue with the water feature in the middle of the street, debates about music or no music or what kind of music or how loud the music should be.

This year the issue is vehicles; specifically, how frequently there are vehicles on a theoretically vehicle-free street: Vehicles on Victoria Row ‘out of control’ reads the CBC headline; Row rage as vehicles ignore signs to keep off Charlottetown’s mall in The Guardian.

The city’s response to this has been to plaster the end of the Row with more and more signs: 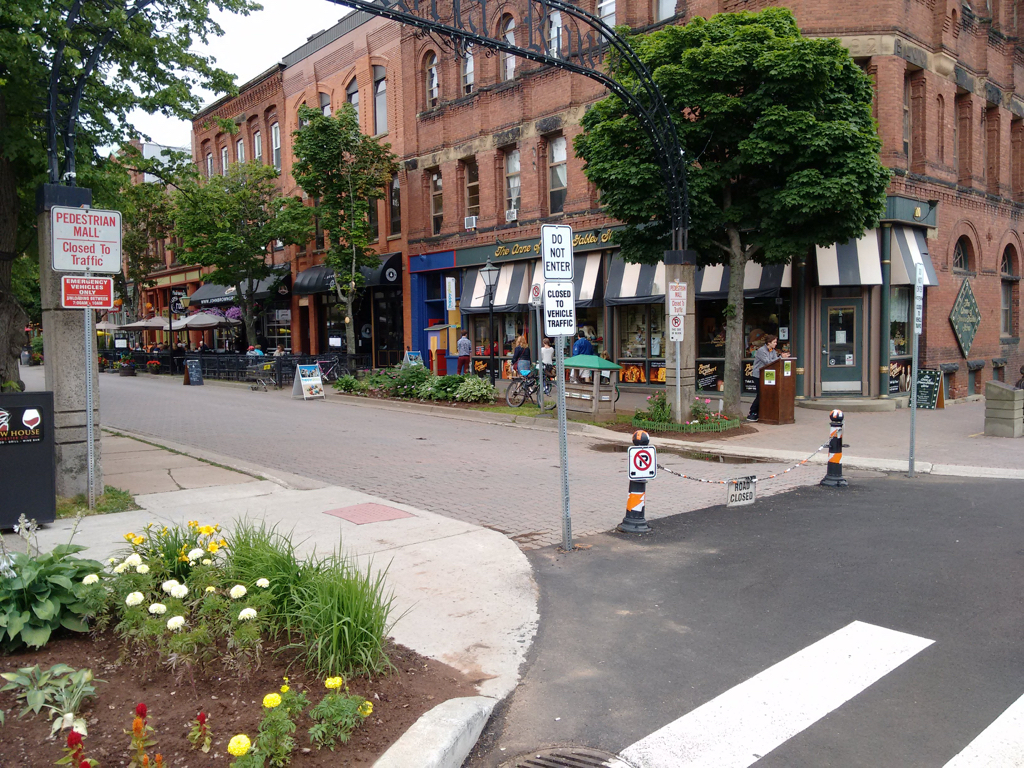 From left to right you’ll see:

In total there are 8 signs there, all with some variation of KEEP OUT.

And yet these signs have seemingly no effect. Other than to make the street seem rather more unwelcoming than I imagine the merchants and restaurants would like, and creating a grove of signposts more at home at the entrance to a toxic waste dump than a tony urban oasis.

All of this brings to mind my first encounter with signage on Prince Edward Island almost 25 years ago: when my friends and I pulled up to the University Avenue Visitor Information Centre. At the end of each parking space was a sign titled “POLITE NOTICE” that went on to indicate that the parking was only for visitors. For a time you would see these signs dotted around the Island, and while you might consider them to have a sort of passive-aggressive tone, I always admired them for leading positive.

Cheekiness like this can backfire too: Oliver and I take issue with the David’s Tea window sign “Sorry pets, humans only” every time we visit with Ethan at his side; in their quest to be witty they’re also saying, by implication, “service dogs are not welcome here.” Sometimes it’s better to be plain and direct.

In other words, whether you are a pedestrian street or a tea shop, maybe it’s better to be welcoming with exceptions rather than all-out unwelcoming.

In this spirit, I present herein my proposal for a replacement of the current signage grove with a single plain and welcoming sign. It dispenses with the “no, no, no, keep out, you’re not wanted here” and replaces it with a “come on in, except you vehicles.”

The City of Charlottetown is welcome to use this without recompense.

That is a good question. I don’t believe there’s clarity on this.

Former City Councillor Rob Lantz was strongly in favour of bikes being allowed here, and certainly you see them.

But tourists tend to be woozy and wandering, and I’ve had more than one instance where wayward tourists have wandered into my path, so I avoid riding my bike on the mall.

Peter, you should consider submitting this topic to the firm working on a plan for the area surrounding Province House and Confederation Centre, as reported in The Guardian: https://www.theguardian.pe.ca/news/local/imagining-a-redesigned-downtown...