I first met Reg Porter on Christmas Day many many years ago. We’d decided not to travel up to Ontario for the holidays, and Catherine Hennessey kindly took us in for Christmas Dinner. Sharing the table with us were David Weale, Darren Peters and Reg.

Needless to say it was an interesting meal.

I’d not laid eyes on Reg Porter again until last night when I was in the audience for the third installment of The College of Reg: The Architectural Heritage of PEI.

I’m not usually a big fan of the “bunch of heritagey people gather in the Carriage House at Beaconsfield to listen to someone talk about finials” kind of event. I’ve got nothing against heritage, nor against finials, I’m simply averse to so much listening. Especially when the subject matter is so earnest.

I’m happy to report that The College of Reg proved the exception to this.

Yes, there was a lot of listening to be done – Reg held forth, without interruption, for almost 90 minutes.

And finials reared their head a few times – I think there might have even been a suggestion that certain finials could “make your heart soar.”

The tone was indeed earnest (albeit with a certain amount of irreverence, especially in matters of church and cats).

Heading out the door when it was all done, I wouldn’t have said my life had been transformed, nor even, particularly, that I’d had a good time. 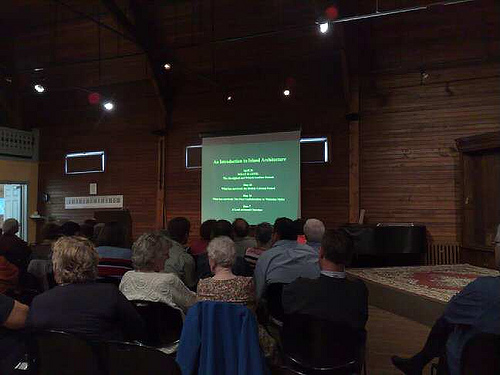 But then, this morning, walking through the city on my way from dropping Oliver off at school, I passed the Paton house at 241 Prince Street and realized that something was different about my eyes.

I’d walked by that property a thousand times over the years, and suddenly I was looking at it in a different way. I noticed the “window in the chimney” and that the entrances had been covered-over, the dark-light-dark pattern of the curve over the entrance that mirrored the pattern in a French cathedral, and the many varieties of stone near the peak of the roof.

Somehow Reg Porter, without me noticing, had inserted an interest in the buildings of my everyday life into my head. And my eyes, previously blinded to all this interesting detail, were now open.

I continued down Fitzroy Street (past the “place where a church tore down a lovely house”) to Queen, past the City Hall (with its tower in which to hang hoses so they wouldn’t rot) and realized that the city will never seem the same to me.

Perhaps The College of Reg is the greatest kind of education of all, education that you don’t notice happening until it’s too late. And for that I’m truly thankful.

The final session of the college for this spring is June 7 at 7:30 p.m. at Beaconsfield. Admission is $5.00 and you don’t need to register in advance; just show up at the door. Recommended.

Good thing in that case you weren’t there for the lecture about prehistoric dwellings and to see Reg’s collection of early tools. I can now not pass a rock without picking it up and wondering if it’s really an early hammer.
Reg is amazing. He can make you care about stuff you din’t even know existed five minutes before he told you.

Steven beat me to it; I thought that house looked familiar.

It’s pretty sad that the city’s pictures are of better quality than the ones trying to persuade people to buy the place.