You may recall that I’ve been working on massaging Charlottetown-area transit information into open data suitable for feeding to things like Google Transit.

I’ve made good progress. There’s now a draft version of a GTFS-feed that gets spit out by a purpose-build Drupal module that assembles all the route, schedule, and stop information and outputs it in a ZIP file according to the GTFS specification.

Working with T3 Transit and the City of Charlottetown, I’ve set up a Google Transit account and I’ve been pleasantly surprised with the helpful, quick support guiding me through the process of establishing Google Transit directions for Charlottetown. While there’s an open source validator that can be used when developing the feed, a validator that’s quite capable and really helped work out the kinks, Google has a closed validation tool that is even more capable and that spotted an issue with some earlier drafts (I’d run the Winsloe/Airport Collector route counter-clockwise through Winsloe when it actually runs clockwise, and this didn’t sync with the sequence of the stops on the schedule). Once the validation passes, the feed moves on to a non-public staging system for testing, and that’s where we’re at now.

I’m meeting with the City and T3 next Tuesday to review progress, and to dig into some of the still-open issues (like “where does the QEH/East Royalty bus actually go?”) and it’s my hope that we’ll be able to move to the next stage, toward a public release, before the end of February. The first version will include Charlottetown routes #1, #2, #3 and #5 along with the Winsloe/Airport Collector; I’m shortly to meet with Cornwall and Stratford officials to get the go-ahead from them to also incorporate their town’s runs into the mix, and that will likely follow in a later update.

In the meantime, you can see evidence of my work via OpenStreetMap, where I’ve added all of the aforementioned routes and started in on the Stratford routes. 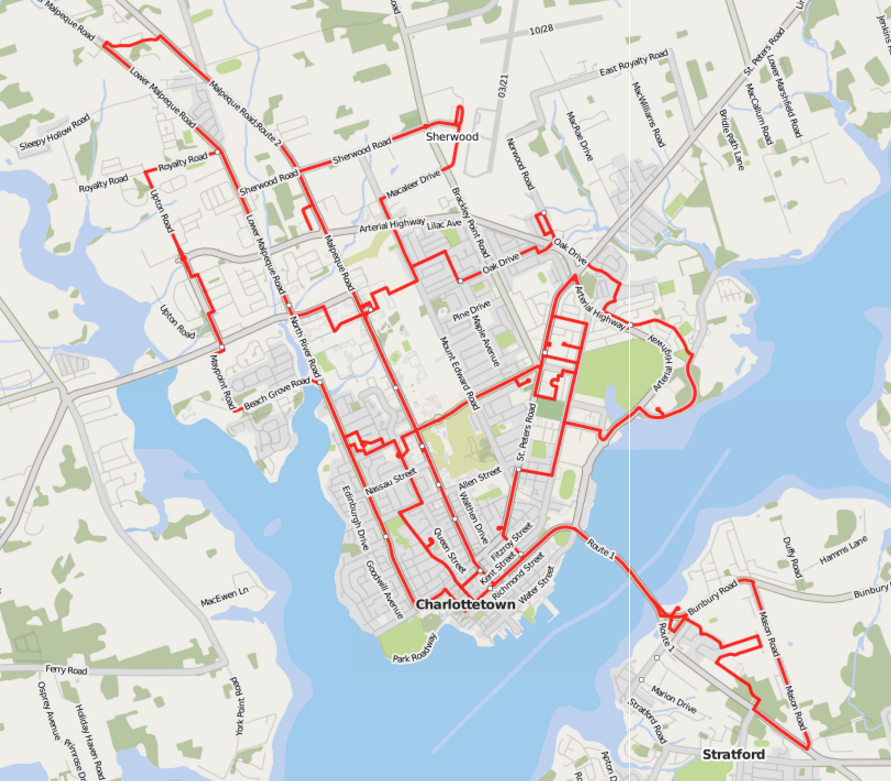 UPEI Library and School I meant.

When I mean Buses I mean School Bus and Transit Bus.