My postal code for the last 18 years has been C1A 4R4. As postal codes go, it’s a pretty good one: it has been easy to remember, and it looks sharp on an envelope.

It wasn’t until I went to mail something to a friend just up the street that I realized that there are other people with the same postal code, and I got curious as to how many of us there are.

Google’s map of the postal code’s boundaries shows C1A 4R4 as including all the buildings on the east side of Prince Street from Richmond Street to Grafton Street: 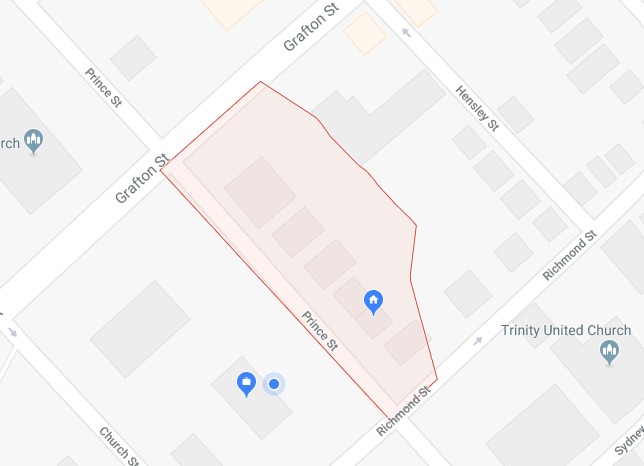 On a roughly-pasted-together composite of Google Street View images, these addresses look like this:

There are 6 buildings in all: 2 single-family homes (ours, at 100 Prince Street, is one of them), 2 multi-unit homes, and 2 multi-unit apartment buildings. Spread across these 6 buildings there are 19 distinct residential units and one office/retail space. A rough estimate, assuming an average of 2 people per unit, then, would see about 40 people sharing the postal code.

The walk from 96 Prince Street to 124 Prince Street is about 79 metres; Google says the distance can be walked, cycled or driven in about a minute.

Often, when I’m in a hurry, I’ll often write my return address as “Rukavina / C1A 4R4,” reasoning that our letter carriers are experienced enough to sort things out if the letter ever needs to be returned.

I’ve become fascinated recently with very-small-scale geographies, inspired, in part, by Flaneur magazine, which focuses on one street per issue: perhaps the best thing to do when everyone else is trying to communicate with everyone, everywhere, is to reach the people in my postal code?

Postal codes are useful to aggregate personal / household level data, while still maintaining good geographic granularity. E.g. energy consumption is published as open data in the Netherlands on full postal codes (which have a format 1234 AB, 1234 is a neighbourhood, AB denotes a (section of a) street). One caveat: some postal codes may contain only few addresses, or only a few households and the rest offices, which may make certain information personally identifiable (e.g. crime statistics showing domestic abuse in a postal code with only 2 households). For such instances one could aggregate the too small postal code area with an adjacent one so the resulting area is big enough to prevent data protection issues.

Is there energy usage data at postal code level for PEI?

What kind of energy consumption data do you have at a postal code level in NL? Are you energy utilities public bodies?

My answer turned into a detailed blog posting https://www.zylstra.org/blog/2018/04/available-energy-data-in-the-nether...

Canada Post changed our postal code in 2011 from C1A 7J7 to C1C 0L9 when they stopped our home delivery and we were sent to a community mail box system.
This has had several results - none positive. For example, we recently realized that we do not receive any City of Charlottetown mail outs like the Mayor’s Annual Report. When I called, a city rep told me that it’s because ~75% of our postal code is outside of Charlottetown and that it isn’t worth the expense to send it to our area.

I believe the City of Charlottetown is misinformed: there are only 7 addresses in C1C 0L9, as the Canada Post lookup tool shows it. 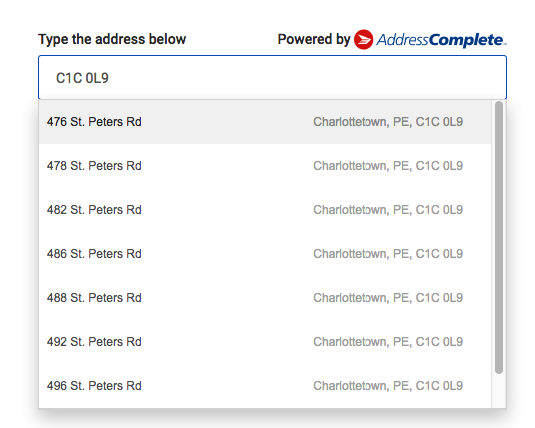 I wonder if with the City was telling you is not based on your postal code, but rather on your postal route? Perhaps when they go to send unaddressed admail, like the annual report, they need to select a higher level of geography, and your peers in the postal code are being screen out.

Here’s a map of the centre of the polygons for all the C1C postal codes (there are 249 of them in total): 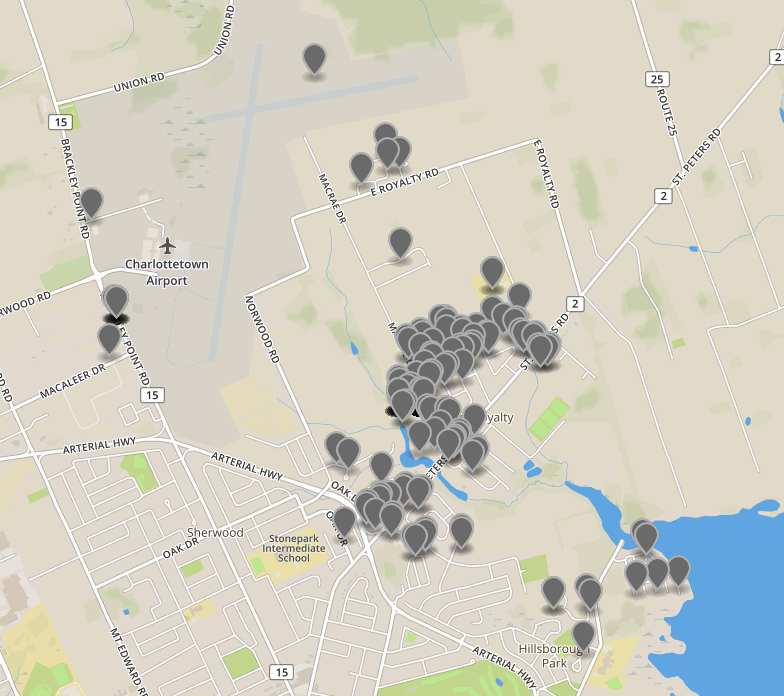 That appears to include a lot of Charlottetown addresses that would be excluded if all of C1C is excluded from communications (as well as addresses in Marshfield, Suffolk, Frenchfort, and Dunstaffnage, which would fall outside the city boundaries, as the City told you).

Walking up Prince Street yesterday I noticed that the building that Canada Post has a single address for at 114 Prince Street has two street numbers on it, one for each door: 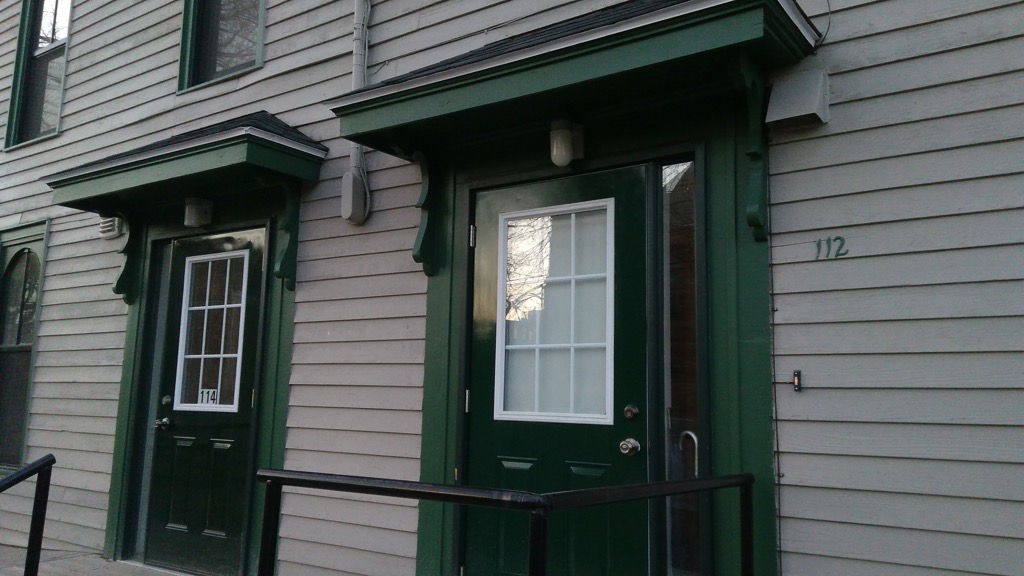 Although Canada Post thinks there’s only one address, the PEI Civic Addressing system has 112 Prince Street as a valid address.

I wonder what the residents of the building use?

maybe i answered this when you were first wondering, but this address is one of many exceptions to general postal rules. the mail goes to a box in the panel of 114 Prince.