In 1967 the National Film Board of Canada released Summerhill, a film about the British school of the same name. I first saw the film in 1985 when my education professor showed it to our class at Trent University. Summerhill is and remains a fascinating school, organized, quite unlike any other, along truly democratic principles. I wanted to see the film again, and so I went looking for it on the NFB website where it was nowhere in evidence.

I knew the film existed because there’s a cataloging record for it (and, of course, because I’d seen it with my own eyes 30 years ago). So why wasn’t it to be found on the NFB website?

It turns out that the NFB has two websites, the “regular” one at NFB.ca and the one they call the “institutional” site at ONF-NFB.gc.ca. The former presents only a subset fo the NFB’s holdings whereas the institutional site has a more complete record, with its own search function.

Searching that site led me to the record of the film, described there as follows:

A visit to a school without fixed rules, where students study as they wish, and are their own masters. A co-educational English boarding school, Summerhill was founded by Alexander Neill a half-century ago. In the film he explains his objectives, and from the activities of the children at work and play can be seen how his methods work. School, he says, should put preparation for life ahead of learning.

Following the “To Order” link on that page led me to yet another NFB website, with the option to buy for private use, for classroom use or for public presentation.

I put a copy – for “classroom use” – in my shopping cart and began the checkout process. At which point I was required to “create an account in a few simple and secure steps.”

It turns out that one of those steps is “wait around for us to approve the account you’ve created.” I waited around. And eventually the email arrived confirming my account.

At which point I had to start the process of finding and purchasing the film all over again.

I stuck with it, sure in the knowledge that the end was near, and it turned out that the rest of the checkout purchase, while endowed with user experience with a 1985 EDI system, went relatively smoothly, and after a barrage of pointing and clicking and typing, I was checked out and done: 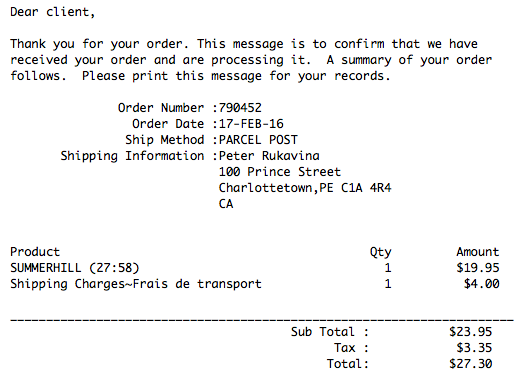 I’m excited to be able to see the film again; I’ll let you know when it arrives.

Congratulations! Looking forward to your review!