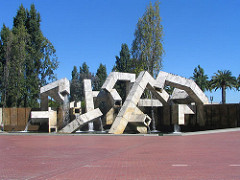 If you are an aficionado of the Confederation Centre of the Arts, you will remember the striking Armand Vaillancourt installation Song of the Nations that was mounted in the upper gallery several years ago.

Turns out that what we had happened upon was the Vaillancourt Fountain, created in 1971 by the selfsame Armand Vaillancourt. And that we’d come at the right time because the fountain was, in fact, turned on again last summer after a 4 year period during which it was left fallow.

You can see the photos I took of the fountain or watch a video clip.

Very interesting blog. I would like to get in touch with Armand Vaillancourt. Can you give me its email address? Thank you.

Thanks for posting these great pictures :)