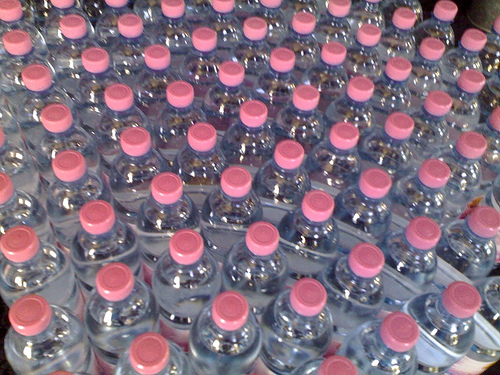 You may recall that back in September I reported on an Eastern School District meeting (back when such affairs were calmer) part of which was a presentation by Leo Broderick and Mary Boyd on bottled water and why it should be avoided.

Although I poked fun at their long-winded presentation, the heart of the matter — advocacy for water as human right and not a commodity — struck a strong chord with me, and I’ve not purchase a bottle of water since and have been quite happy, in general, with Charlottetown’s municipal water supply as an alternative.

I tried to kick things up a notch on Monday night at the meeting of the Prince Street Home and School Association. We were discussing our annual Spring Fling event — the association’s main fund-raiser — and the topic of using bottled water came up. I invoked the memory of the September meeting (held, by coincidence, right at Prince Street School) and suggested we consider not using bottled water at all.

While there was some conceptual support for this idea, my advocacy ultimately failed.

The first sticking point surrounded the need to deliver water to the many volunteers working around the school during the event: traditionally this has been done by bringing them bottled water, and there was a feeling that trying to bring them cups of water was impractical given the crowds and the commotion of the event. Maybe there’s a solution to this, but we didn’t arrive at one during our discussions.

Second was the issue of what to sell at the hot dog stand instead of water; while juice was a possibility, it was generally agreed that without water many people would default to buying pop: bottled water’s very status as an expensive commodity lends itself well to fund-raising and selling sugary bottled water instead would hardly be a step ahead.

I’m certain that with more time and some creative problem solving both of these issues could be resolved in a way that would remove bottled water from the equation and not compromise the event, but it was time the meeting wasn’t willing to spend.

While the anti-bottled water education effort has made inroads over the last few years, it seems like what’s really needed to take things further in situations like this is very practical “how to” advocacy: “A Guide to Holding Your Event Without Bottled Water,” for example. I’d welcome pointers to such resources, and offer my support to anyone who wishes to advocate in this area.

One thing that always surprises me here in Toronto is how good the tap water is. It is great.

One thing to consider: Purchase Nalgene or similar bottles and fill those with tap water. That way you get the easy-to-transport bottle, and everyone gets a souvenir. Cost could be kept pretty even I would think.

Put one of these on the tap in case you are worried about flavor: http://www.shopbrita.com/produ…

Your post is very timely. Just yesterday, I met witht the H&S Healthy Eating Executive at Englewood and I brought up the idea of no longer selling bottled water at the school. It was agreed that we would make the change in September (easier to start fresh with changes at that time). We are going to look into the possibility of getting safe water bottles for all of the students to use while at school.

I don’t have any easy answers for your spring fling, but I do know that Niagara Falls has just decided not to sell bottled water in any of their public spaces. If they can do it, I am sure we all can.

I attended Maude Barlow’s talk on global water issues at UPEI last week. She is a great speaker and very inspiring.

The City of Charlottetown banned the use of bottled water in City facilities two years ago. We use water coolers filled with municipal water throughout City Hall. There was skepticism at first but I think it is now regarded as one of the most rational and rewarding decisions we have made. The Federation of Canadian Municipalities just recently recommended that all municipalities follow suit.

However did we hold school fund raisers and events before there was bottled water? It seems like it has been around forever, but it really hasn’t. At the risk of sounding like an old fogey, how about if, in this case, we just go back to the way things were?

Funny you should mention a “Hoe-to”brochure … here’s something I came across recently:

The bottle ban has been making big news out here in Saskatchewan too. Well, almost! Up here in the north it’s too damn cold to carry bottled water. It freezes instantly! lol

I think schools and other organizations could actually invest in water coolers for ongoing events — I am encouraging some groups to buy them and lend them out in a way to promote water -cannot understand how bottled water became so ubiquitous in such a short time — I remember travelling in early 1990s in places without access to potable water and marvelled that you needed to but the stuff and much of what is sold is filtered tap/municipal water anyway — evian is naive backwards !!

Does Prince Street Elementary have drinking fountains? When I attended city schools like Spring Park, Queen Charlotte and Colonel Gray, we had drinking fountains. No bottled water to be found during the 1980s and (early) 1990s. Of course the snow was over the top of the power lines back then and we had to walk uphill there and uphill on the way home over shards of broken glass too…

The issue isn’t whether there’s adequate water on the site — there are drinking fountains, kitchens with sinks, all manner of municipal water access points. The situation is this: volunteers running activities all over the school who can’t leave their posts, but need refreshment brought to them. It’s a container issue, not a water issue.