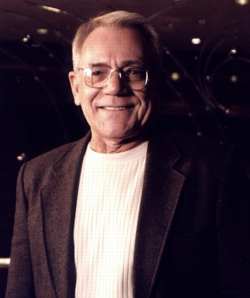 Although the various obituaries in the media have talked about his work on Sonny and Cher, on Bizarre, and on Hilarious House of Frightenstein, it’s Party Game I’ll remember him for.

Party Game was produced by my hometown television station CHCH-TV in Hamilton, Ontario. The show was hosted by Bill Walker and starred Billy Van as well as Dinah Christie, “Captain” Jack Duffy and various others.

The show was, essentially, “charades on television.” Although it was locally produced and very low budget, I remember it as being, in the fog of my youthful memories, very urbane. I didn’t have Dorothy Parker and the Algonquin, I had Party Game.

Billy — and all of them — were witty and quick. They had fun. It wasn’t Hollywood, but in the 1970s in Ontario, it was pretty good television.

Billy Van will be missed.

i was telling people the exact same thing pete. party game always seemed on when i came home for lunch back in the 70’s. it was awesome. interestingly, i was discussing the notion of producing an updated version of the party game the other day… it was my first exposure to “canadian celebrity”. Billy Van… if he had been born twenty five years later he would have been a big big star.

I think ATV carried Party Game after school. I certainly recall watching it in mid-70’s Annapolis Valley. Billy Van and his separated at birth twin Howie Meeker were the giants in my pre-teen pre-cable pop culture world. What I think what made the show work was the seeming lack of a script. The direction seemed to be “you guys play and we’ll film.”

I have a vague memory, though I’m not sure if its real or imagined, of Billy Van narrating some wacky videos about RAM and ROM in grade 9 computer science whilst we studiously pecked away at the Commodore Pets. I wasn’t stoned at the time, but looking back I really wish I had been.

I was thinking about Billy Van stuck in the middle of the threads above and below. If we all were just a bit more like the good folks on Party Game all this dope smoking malarcky wouldn’t be stirring up ill will. Then again… you don’t think they were giggling all the time for reasons other than Dinah Christie’s poor sketching abilities?

Billy Van Evora will be missed. His comedic approach to child entertainment will stand as a Canadian masterpiece and inovation in the ’70s show HHF. He surely had me a scared 8 year old.

Biily Van Evora was a genius, and as all great minds was nit fully appreciared in his time. We must strive to keep his memory alive through the promotion of his work. Tell someone you know about House of Frightenstein of Party Game. Show them if you can. Let’s keep him alive, Bababoba. He will be missed.

Sorry for this outdated post. I had to throw in my two cents. First, they don’t make actors better than Billy Van. They broke his mold. True, Billy Van played nearly EVERY major character in Hillarious House of Frightenstein a tv series in 1971 .. and I thought the guys from Monty Python could play entirely different roles! .. but THE most astonishing thing is that Billy played the Oracle in HHF which was 180 degrees (you couldn’t get any more different) from any other character in that tv series. I still can’t believe that’s the same guy! Magical actor!
And yes, BILLY VAN WILL TRULY BE MISSED! I love you Billy. Thanks for all your work!!!!

Does anybody here have any Party Game on tape?

I watched Party Game every night at 6:30 when I could persuade my Dad to cut into the news. I adored Billy Van. I remember Al Boliska hosting before Bill, and liked Jack and Dinah. Dinah was beautiful and she was really good at charades. But Billy was hysterical: the way he leered at the guest women (I like soft things), (Elmo) . I loved Hilarious House of Frightenstein-Billy was so brilliant-I thought he should have been more famous. My sister met him once, in the Yonge St. arcade,and she said hello and he told her she was a very pretty girl (she was about 35). He was precious, kind, and irreplaceable. I was sorry to hear he had died. I would love to know his birthdate. Enjoy the Afterlife, Billy! Love, Sheila

Us oldsters remember Billy Van from another Canadian classic show called Nightcap. It was legendary for its risque (for the times) humour and aired after the late news on CBC Toronto. It was genuinely funny!

A few years ago I came across some Senior’s newspaper — and Billy Van was in it. It was hard to accept that irrepresible zany guy as an oldster doing some mainstream entertainment gig — but there you have it. He probably needed the money. Hey, that’s how we treat our legends here in Canada (do you think Don Harron really WANTS to do those lfe insurance ads?). Billy Van was amazing!

I was lucky to attend a few tapings of Party Games. I have to admit I fell in love with Billy. He was a warm, funny, caring individual. Over the years I have watched his career. While sucessful, he NEVER received the credit he deserved!!!! A star on our walk of fame SHOULD have been given while he was still alive! We have lost one of our pioneers

Hilarious House of Frigtenstein can now be seen on Bell Expressvu 7 days a week!

I remember quite well. Party Game, Frightenstein, Sonny and Cher, Bits and Bytes. He had a genius that sprung forth from a stream of talent that is seldom, if ever, allowed to performers. We met numerous times at a restaurant called Mr. K’s, at 74 Victoria St. Mr. Van showed no airs about himself, but would briefly entertain the clentelle with some impromtu zany antics. Always the consummate performer. If you wish to see some of talent on the small screen, The Hilarious House of Frightenstein is presently airing in Space network at 6pm and 11pm. Enjoy.
Peace to you Billy, your gave more than we deserve.

I remember the gentleman quite well. Party Game, Frightenstein, Sonny and Cher, Bits and Bytes. He had a genius that sprung forth from a stream of talent that is seldom, if ever, allowed to performers. We met numerous times at a restaurant called Mr. K’s, at 74 Victoria St. Mr. Van showed no airs about himself, but would briefly entertain the clentelle with some impromtu zany antics. Always the consummate performer. If you wish to see some of talent on the small screen, The Hilarious House of Frightenstein is presently airing in Space network at 6pm and 11pm. Enjoy.
Peace to you Billy, you gave us more than we deserve.

just an fyi, there are lots of frightenstein clips on youtube…
and also a few clips of party game!

Billy’s work will not be forgot… :)

Anyone have Bits and Bytes on tape or digital form? Translate my e-mail addy to normal addressing and let me know guys.

I’ve found a helpful Bits and Bytes page, but it lacks audio or video (the show had a very addictive theme — “Patterns of light, on the video screen…”)

There are more here.

Yes indeed, Billy was an incredibly gifted performer—actor, singer, comic. More than that, however, Billy was a beautiful human being—compassionate with and kind to all. The only reason he never achieved major stardom was twofold. First was his humility. As talented as Billy was, he never saw himself that way so he never pursued stardom. Second, he was a child of Canada through and through. When the producers of the Sonny & Cher Show took him to Hollywood to play a powerful backup to the couple, he was becoming recognized there as the multi-talented performer he was. His wife told me he was so homesick for Toronto that he was ditching California and “coming home”. The lure of stardom and the big money were not for Billy Van. Billy and I became close friends. We met in 1965 when I ran the advertising department of a small U.S. brewery and our ad agency chose Billy to be in a television commericial for our Colt 45 Malt Liquor. Well, that spot turned into eighteen commercials featuring Billy, covering eleven years and filmed in London, Puerto Rico, Mexico, Israel and much of North America. We even stuck Redd Foxx in a couple of them. I loved Billy Van and so did my daughters. And like those who watched him on his CBC shows, I miss the rascal.