A series of communications related to Twitter coalesced in front of me this week.

So I was, of course, immediately intrigued.

Then I read in The Guardian that U.S. Customs and Border Protection has added a (currently) optional request for social media account information to its visa application form. It wasn’t so much that I was fearful of being personally affected by this–I don’t need a U.S. visa, as I’m a citizen–as I was woken up to the fact that the tweets in my timeline are, in aggregate, a digital paper trail of my comings and goings, feelings and actions. A trail that government agencies think it useful enough to mine.

The creepy feeling this engendered was only amplified by reading a CBC story this morning that the Canada Revenue Agency–our tax agency–is starting to do much the same thing.

The combination of realizing that I could delete my archive–in the spiritual as opposed to technical sense–and that the only loss suffered as a result will be my data mining attack surface, combined with an increasing realization of how useful (to others) that attack surface is becoming, was enough to push me over the edge.

So I downloaded my Twitter archive, then fired up a Windows 7 virtual machine on my MacBook Air, installed Twitter Archive Eraser, and went through the process of deleting the 36,318 tweets I emitted over the last decade.

It took about 30 minutes to get it all done; I deleted my thousands of direct messages and my 3,314 favourites while I was at it (these are more cumbersome to erase because of Twitter’s rate-limiting; patience is required). 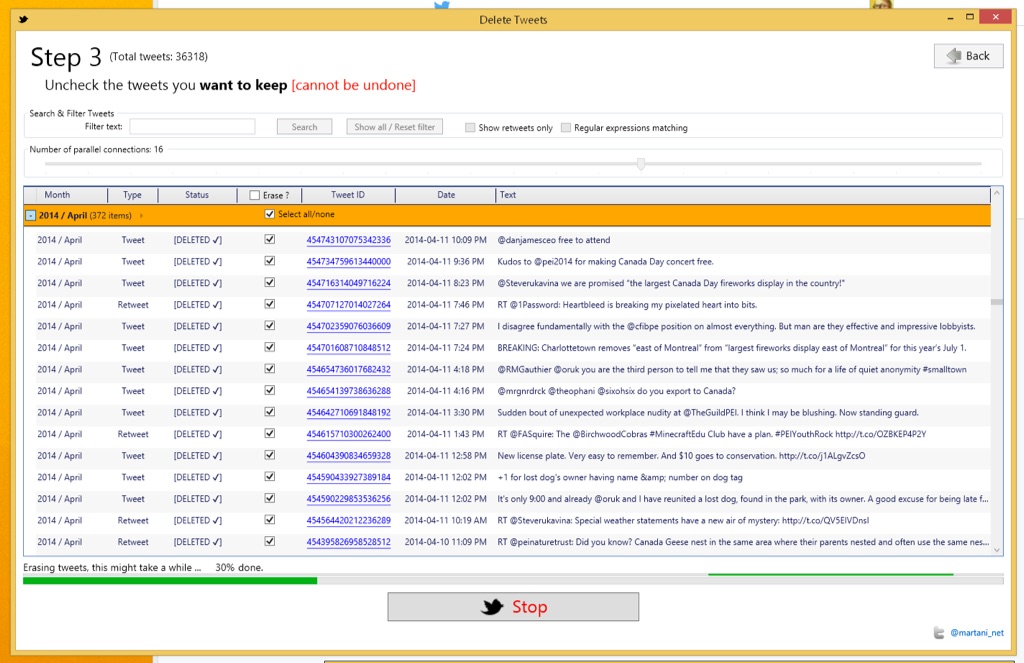 This process was, it turns out, incredibly freeing.

So freeing, in fact, that another mention of Twitter, in this week’s edition of The New Yorker Radio Hour, also caught my attention. Dan Savage talked to David Remnick about Twitter:

Remnick: I don’t understand why you do it. I get hit on this all the time. I’m not on it, and yet I read it. I peek over the hedge as it were. But I just know if I went on it, it would be a time suck.

In Savage I saw myself.

I love Twitter (how could I have tweeted 36,318 times without loving it). And yet, as Remnick fears and Savage confirms, it is a time suck. Like Savage, checking Twitter has been a morning habit, an evening habit, and a standing in line to get coffee habit. I had cause to wonder not so much “why am I putting this needle in my arm?” as “if I stop putting this needle in my arm, what else could I spend my time doing?”.

I’ve tried and failed before to quit, most splashily back in 2009.

So this time I decided to try a more nicotine-patch style withdrawal: after I deleted my archive, my direct messages and my favourites, I also unfollowed everyone but Catherine and Oliver, reasoning that if there’s nothing on my timeline, what’s there to be addicted to?

Time will tell whether the patch works.

Interesting that you unfollowed everyone so you would have nothing to be addicted to. I use Twitter differently since some time, I follow a number of topics and a number of events. And I Tweet into those topic streams. I hardly ever look at who I am following, or who's following me. I can imagine quitting Twitter, in fact, in terms of tweeting to my followers I've already left in a sense. For events, until the re-emergence of IRC backchannels, I see myself using Twitter for a while longer, to keep track of who's there, links to side material, and finding out what goes on at a event.

That’s interesting, Ton: your use of Twitter runs at cross-purposes, to some extent, with mine, inasmuch as your “tweeting on themes” or “tweeting with event attendees” makes for a dissatisfying experience for someone just following your timeline.

Of course disjointedness is a central fact of Twitter, so this is expected and usual.

Yes, I understand. But I can't help thinking that there is also a grieving process involved. I just started on Twitter. Just now. It is the natural outlet medium for me. For my cognitive style. I always admired aphorisms. I lived my professional life in aphorisms. (Drove my late, unlamented Ph.D. supervisor crazy! He said: "You're just like Marshall McLuhan!" He meant that as a negative. I always wanted to write and publish books. I was too scared: my livelihood was always on the line. Twitter is a cheap substitute. I guess the hashtag would be Harry Chapin Taxi.

You are right about the grieving: there are a bunch of people—tens or perhaps hundreds—to whom my only connection was Twitter. And so, by decamping, I’ve effectively cut them out of my life.

Even more significantly, there’s a part of my brain that thinks in Twitter, and that part was left without an outlet.

Fortunately I have this blog as a replacement for some of that. Only a slice, of course. But a more meaty slice. On Twitter my affirmation synapses were constantly firing small sparks; over here is lonlier, but when dialogue happens it’s much more often life-altering.