This April marks the fortieth anniversary of the passage of An Act to Provide for the Prohibition of Certain Public Gatherings by the Prince Edward Island Legislative Assembly, a law considered and passed in two hours on April 6, 1971. There’s an excellent article (PDF) in the Fall-Winter 2002 issue of The Island Magazine by Greg Marquis that describes the context that gave rise to the act:

The event that sparked the national controversy, and prompted a national radio show host to dub Prince Edward Island the “uptight little Island,” was Junction ‘71. Starting in February, two local promoters planned a rock festival at the arena in the village of Parkdale, a Charlottetown suburb that hosted events such as cattle shows and Old Home Week. Given subsequent fears of sex, drugs and rock and roll, the lineup appeared relatively harmless. It consisted of Canadian pop group Edward Bear whose hits included “You, Me and Mexico,” the group Ocean whose song “Put Your Hand in the Hand,” penned by Gene MacLellan, sold two million copies, and folk singer Bruce Cockburn who had performed on the soundtrack of the film Goin’ Down the Road. Also on the bill were Maritime rockers Pepper Tree (“Love Is a Railroad”) and Sam Moon and the Universal Power. The youthful promoters, who thought that they had proceeded through the proper channels, planned to donate 50% of the gate to the Easter Seals Campaign.

With the help of an excellent reference librarian at Robertson Library, I include the text of the Act below as it doesn’t exist in digital form anywhere else.

CHAPTER 36
AN ACT TO PROVIDE FOR THE PROHIBITION OF CERTAIN PUBLIC GATHERINGS
(Assented to April 7th, 1971)

BE IT ENACTED by the Lieutenant-Governor and Legislative Assembly of the Province of Prince Edward Island as follows:

(a) “Minister” means the Minister of Justice of Prince Edward Island;

(b) “Public gathering” includes any contest, game, race, dance, apparatus, amusement, display, device, exhibition, attraction, performance, presentation program, festival, show or motion picture, operated either indoors or out of doors, which is or which may be attended by the public

2. (1) With the approval of the Lieutenant Governor-in-Council the Minister may prohibit any public gathering which in his opinion may contribute to the disruption of public order, or where in his opinion there are insufficient medical services, fire and police protection, sleeping facilities, or other essential services.

3. The Lieutenant Governor-in-Council may pass such regulations as the Minister may deem advisable for the better carrying out of the intention of this Act.

As it turns out, cooler heads prevailed, and the Act was repealed; as Marquis relates:

At first Premier Campbell stood firm, arguing that recent riots in the United States proved the need to prevent volatile gatherings of youth before they got out of hand. The government maintained its right to ensure public order. But in the face of negative publicity, and criticism both on and off the Island, within two weeks the Liberals announced that they would repeal Bill 55 in the fall of 1971. The “Public Order Act” would be replaced by a new measure recommended by a committee of citizens. The Premier now admitted that the government had acted in haste and declared that he was opposed to neither rock music nor hippies. But he claimed that the incident had served a useful purpose in generating dialogue on “the generation gap.”

This is such a delightful slice of Prince Edward Island history; packed into the episode is so much Prince Edward Islandness, and so much of the zeitgeist of the early 1970s. Many of the politicians and public servants of the day are still with us, so I hope that some sort of memorializing of the event will take place this April. Perhaps a public gathering? 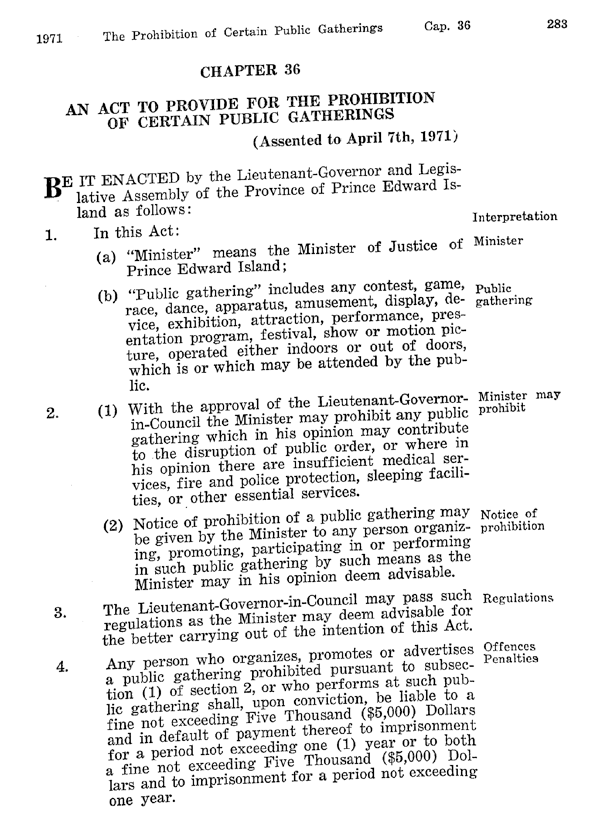 About 15 years ago, I produced a documentary for CBC Radio about this interesting episode. If Andy Wells is ever at the market, you should ask him about his memories of the “hippie threat”. Very funny.

It was an exciting time. Doug and I being the youthful promoters of Junction ‘71,are Very pleased we were insturmental in bridging the generation gap, as premier Campbell pointed out. Still owe Bruce Cockburn and Edward Bear group $750.00 each. Junction 2012 is an entertaing thought.

Careful there, Cuyler. One of the Edward Bear group is my husband’s best friend.