I’ve been in “so, how was your trip!” answering mode for the last week or so since we returned from our trip to Europe, and I realized that lots of the tiny details, the details that really shape a trip, get left out from the quick conversations that result. So there, for posterity, are 15 small highlights from our trip. They might never make it into a conversation, but together with hundreds of other tiny things, good and bad, they’re what really make a trip memorable.

We arrived, dog-tired after a flight to Philadelphia, a 5-hour layover, and an overnight flight, at Munich Airport early in the morning. We had some time to kill before our train to Basel, and so we found our way to the plaza outside Terminal 2 where we had coffee outside. It was just warm enough, and the sun was just in the right place to take the edge off. It didn’t cure our jet lag, but it sure helped. 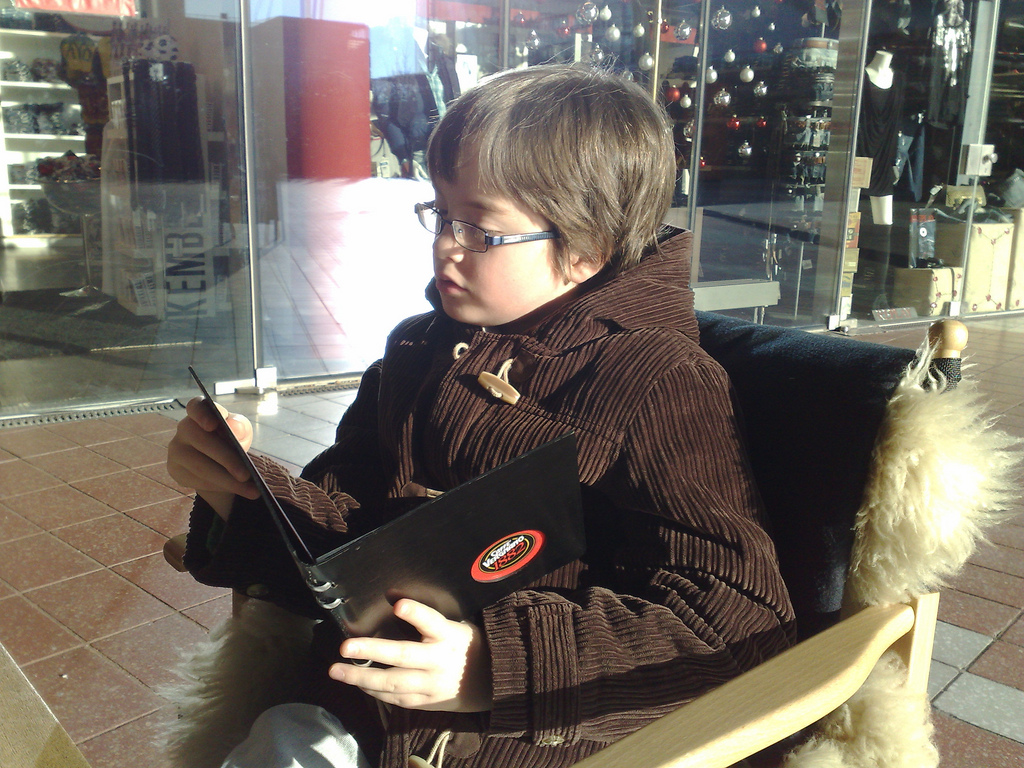 For some reason you can’t use a North American Nintendo charger with a plug adapter in Europe. We bought a Euro-charger in the spring in Wolfsburg, but of course it went missing in the interim, so we had to find a replacement. Fortunately this was easy: across the street from the central train station in Munich is a Karstadt department store, and in the electronics section they had just what we needed (the store itself brought back memories of Eatons; I’d forgotten what a good department store was like). 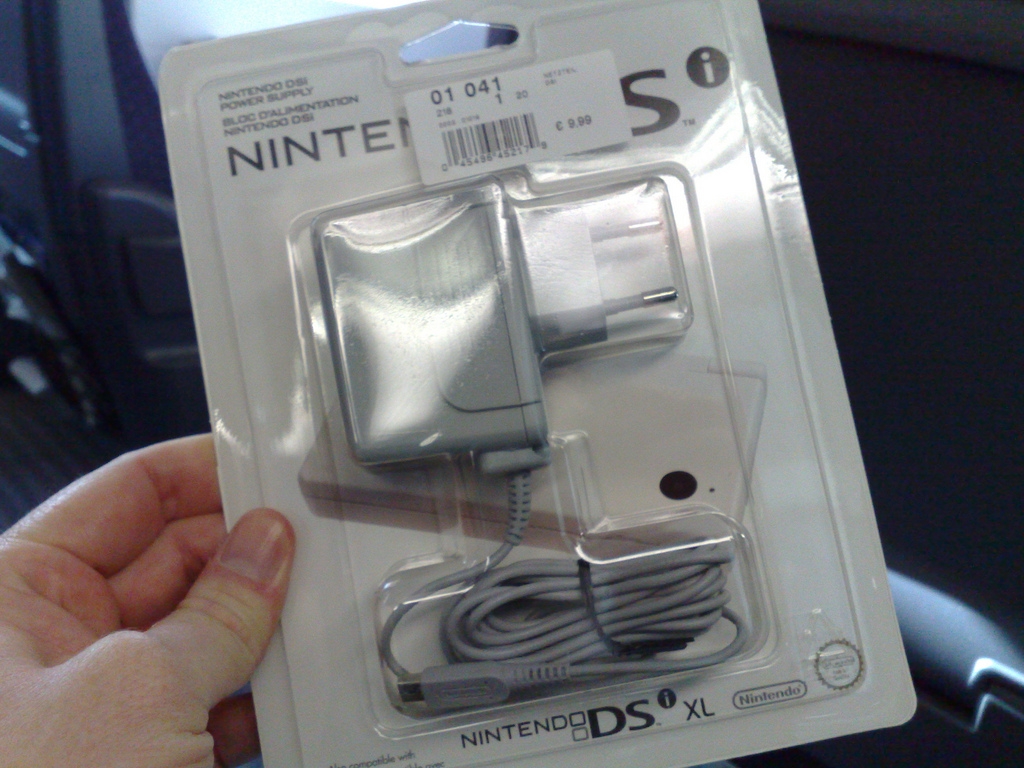 A Ride Along Lake Constance

Our train trip from Munich to Basel consisted of a sleek ICE train from Munich to Ulm followed by a pokey regional train from Ulm to Basel. It was at least 25 degrees C on the regional train, and Catherine and Oliver conked out asleep soon after we boarded. I pulled out my Nokia N95 to pass the time, and managed to cobble together a data solution from an old Vodafone SIM card with some credit left on it, enough to fire up Google Maps and realize that the train was passing along the shore of Lake Constance, which brought back memories of a very bizarre staging of The Ride Across Lake Constance I saw at The Union in Peterborough, Ontario in the late 1980s. I snapped a photo as Lake Constance whizzed by. 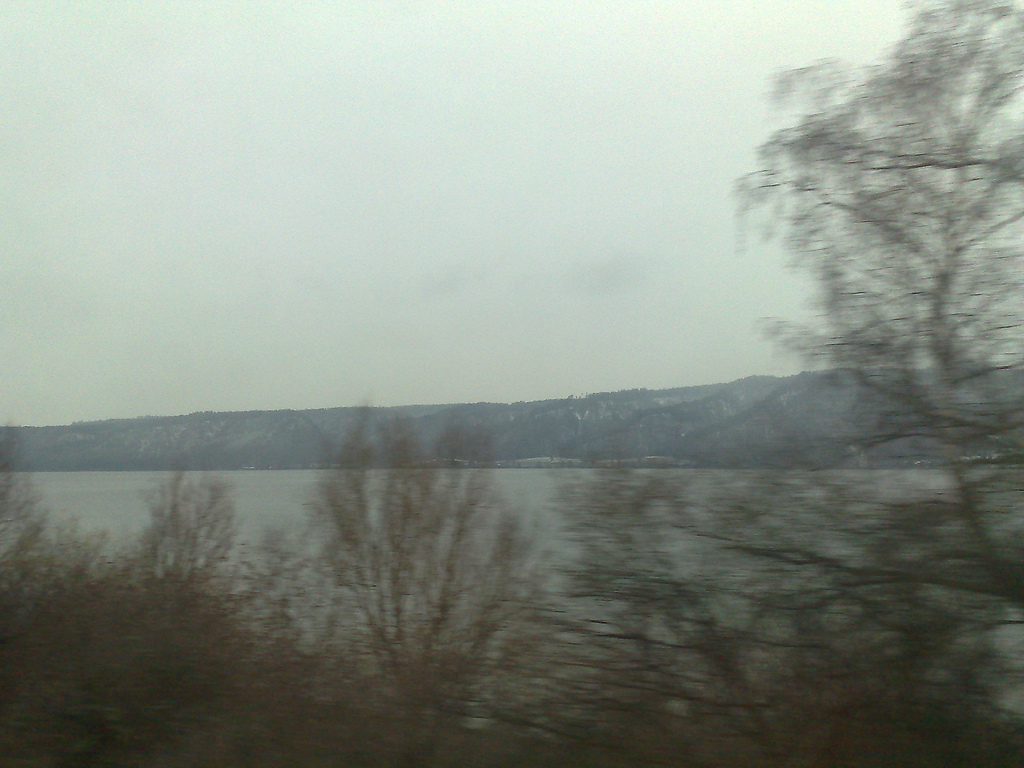 When we checked in to our hotel in Saint Louis, just across the border from Basel in France, we asked the front desk clerk for a recommendation for a place to eat. She directed us to a French restaurant in a hotel on the next block, which turned out to be closed, rather than to the Gengis Khan Grill, which was right across the street. So we went to the Gengis Khan Grill. And had a great cook-it-yourself-at-the-table meal. 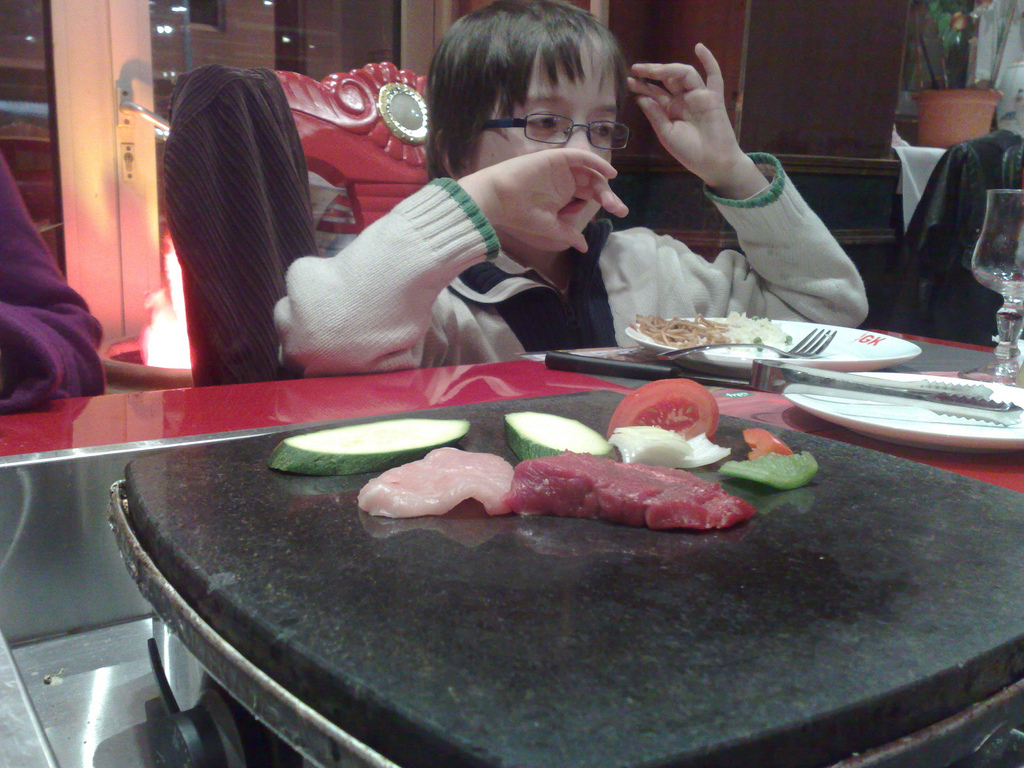 Waffles on the Sidewalk

After spending the afternoon at the Basel Paper Museum (a delight), we walked up the hill from the Rhein toward downtown Basel and stumbled across a restaurant holding some sort of special Christmas event on the sidewalk that involved selling waffles and apple cider and giving away crème caramel. Of course we stopped. 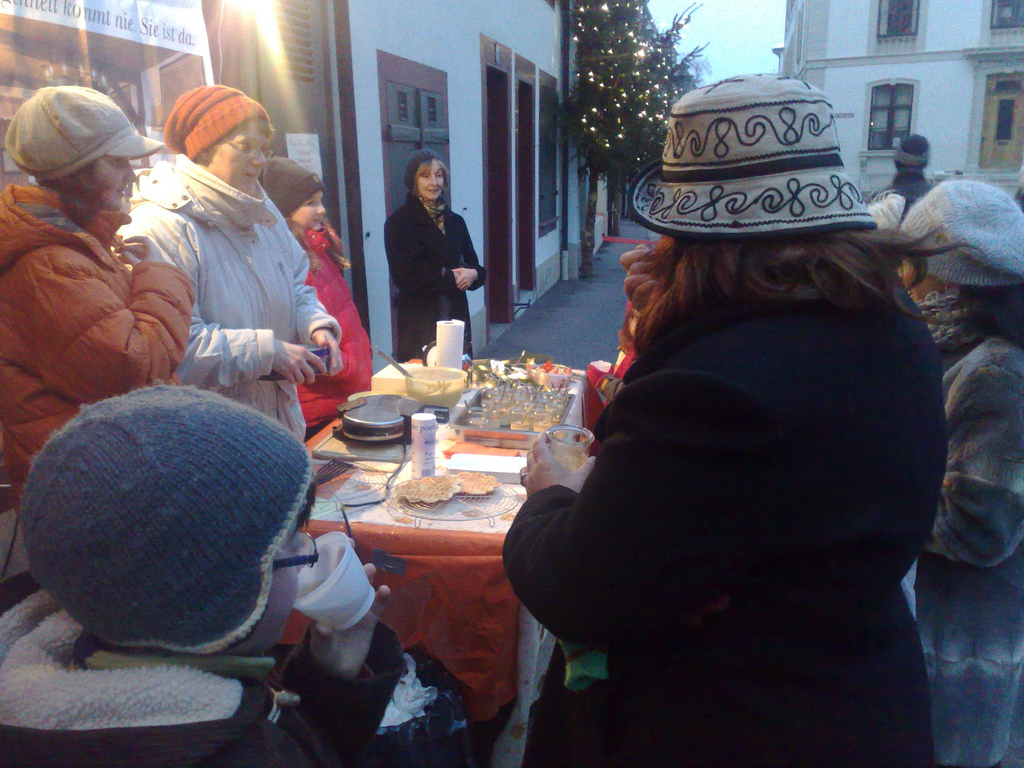 Our friend Guy recommended a place for coffee near St. Marks in Venice, and gave the directions as follows:

From the San Zaccaria Vaperretto stop, turn left and walk up to the Pallazzo D. Prigioni (the building before the footbridge that looks onto the Bridge of Sighs). Hugging the right of the building, is an alleyway, just set back under the cloisters. Walk up there, about 200 metres, and about 30 metres before you hit the small square, it’s on your left. A small shopfront (no tables), with cakes in the window.

Miracle of miracle we were able to follow Guy’s directions (despite the Bridge of Sighs being obscured by scaffolding) and we enjoyed excellent coffee and pastries on a cold, damp late afternoon in Venice. 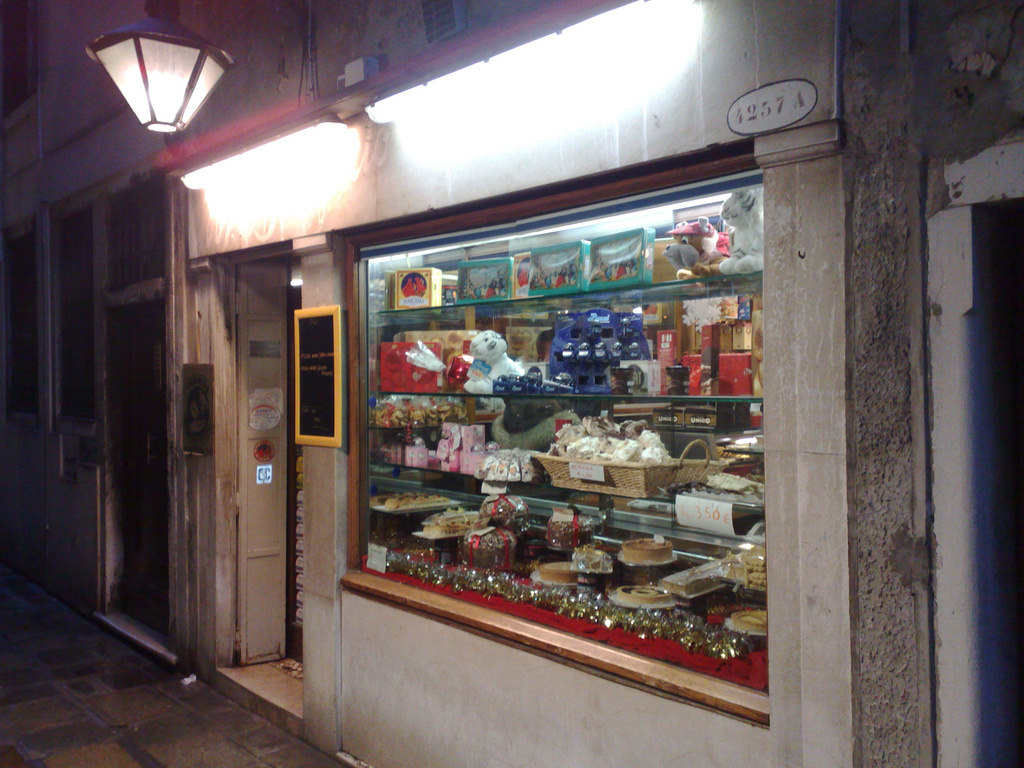 Venice to Ljubljana by Bus

It is rather difficult to get from Venice to Ljubljana: taking the train requires a long detour through Austria, there are no flights (and it would be absurd to fly, as it’s so close) and bus information is hard to come by. Fortunately I found Florentia Bus, a company with a Florence to Sofia (Bulgaria) run that stops both in Mestre (on the mainland at the end of the causeway to Venice) and Ljubljana.

Should you ever find yourself needing to catch this bus, here’s how to do it: first, buy your ticket online to save language and money confusion; next, take the train from Venice to Mestre (many times an hour; cheap); at the Mestre train station, exit and turn right, walking past the tiny bus station (where you might stop and pick up snacks) and onto Via Ca’ di Marcello; walk to the middle of the block, past the grocery store and the sketchy-looking industrial yard where you’ll find a tiny sign that says “International Buses.” You will not believe that this is where you are to catch the bus, but it is. Wait. The bus may be late. Be patient. Wait some more. Eventually, the bus arrives, you show your receipt, board, and enjoy the ride to Ljubljana with your new Bulgarian bus-mates. 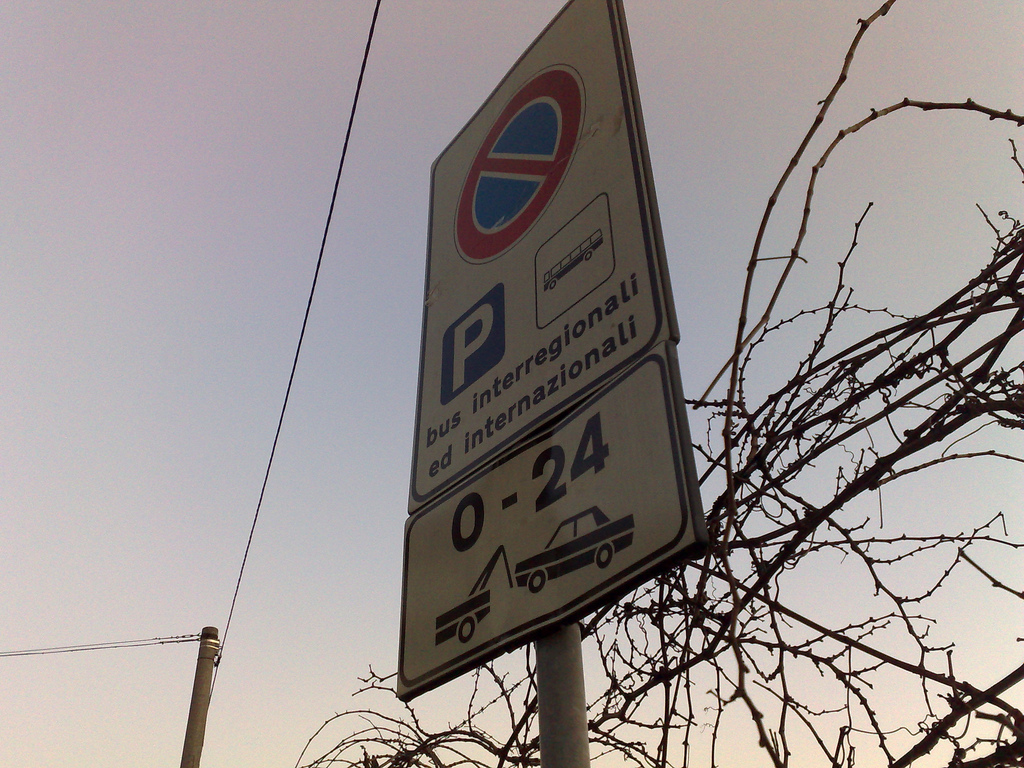 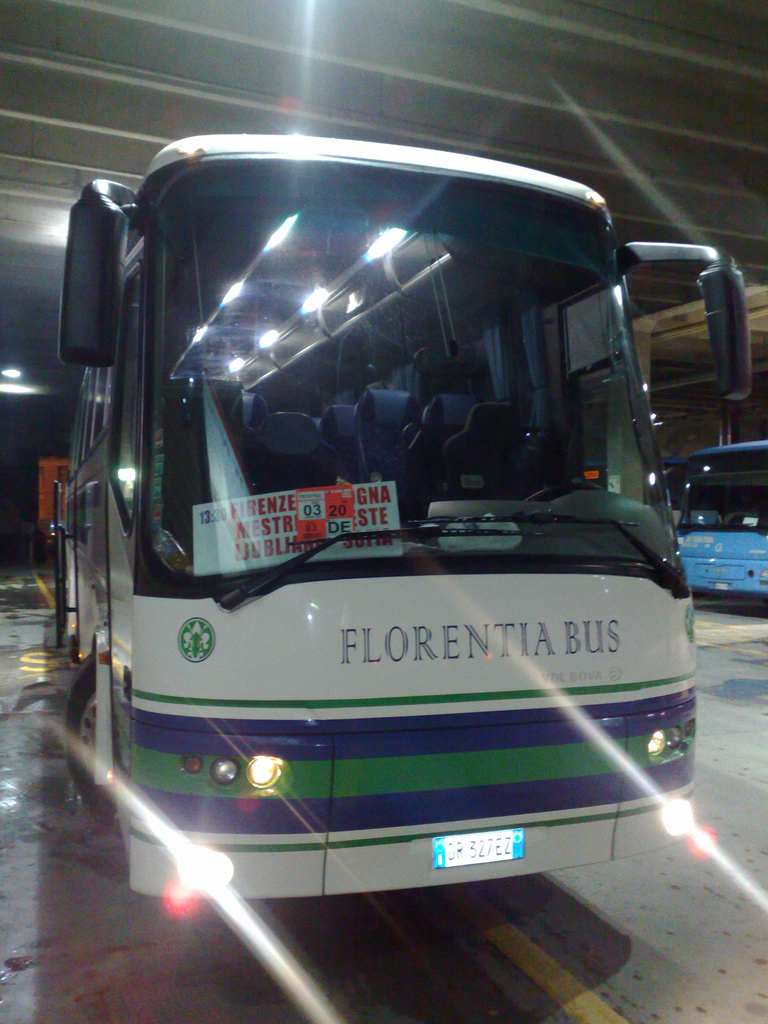 If you find yourself needing to use the toilet while on-board the bus, you will not find it at the back of the bus, North American-style, but rather in the “basement” of the bus, entered from the side of the stairway that comes up in the middle of the bus. Please note that you are not allowed to pee standing up. 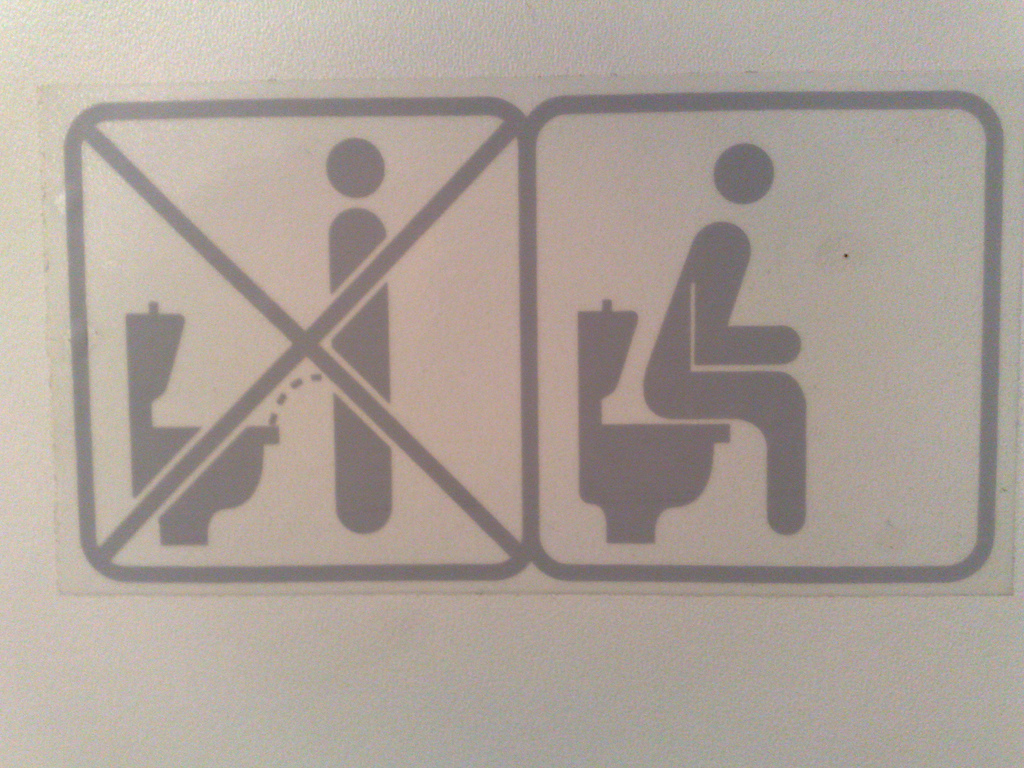 When my father and I visited Ljubljana in 2004 it still had a vaguely post-communist air about the place, and the hotel we stayed in, while pleasant enough, felt more “Soviet-style apartment block” than “urban retreat.” Not so City Hotel, where we stayed this time: it oozes “designer hotel,” but it’s relatively cheap. And the best thing about it was the buffet breakfast, which was, bar none, the best hotel buffet breakfast I’ve ever encountered. 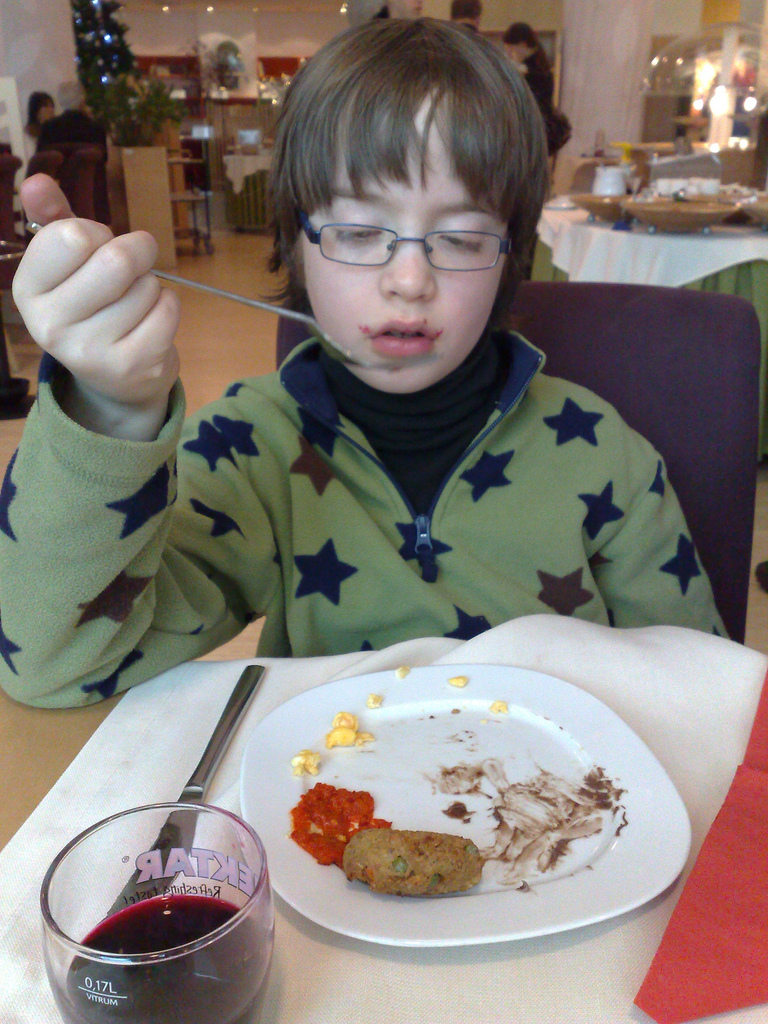 There are a lot of places to rent a car in Ljubljana. To be honest, I choose Sixt because I like the brand identity: bold, black and orange, sans serif. Turns out they also offer quick, friendly service and well-maintained cars. Our tiny Hyundai served us well, even on the Croatian highways with their 130 km/hour speed limit. The downtown Sixt counter is handily located at the end of the bus terminal. There was a small screw-up with billing – what should have been a pre-auth on my credit card was processed as a charge – but this was quickly cleared up by email after we returned home. 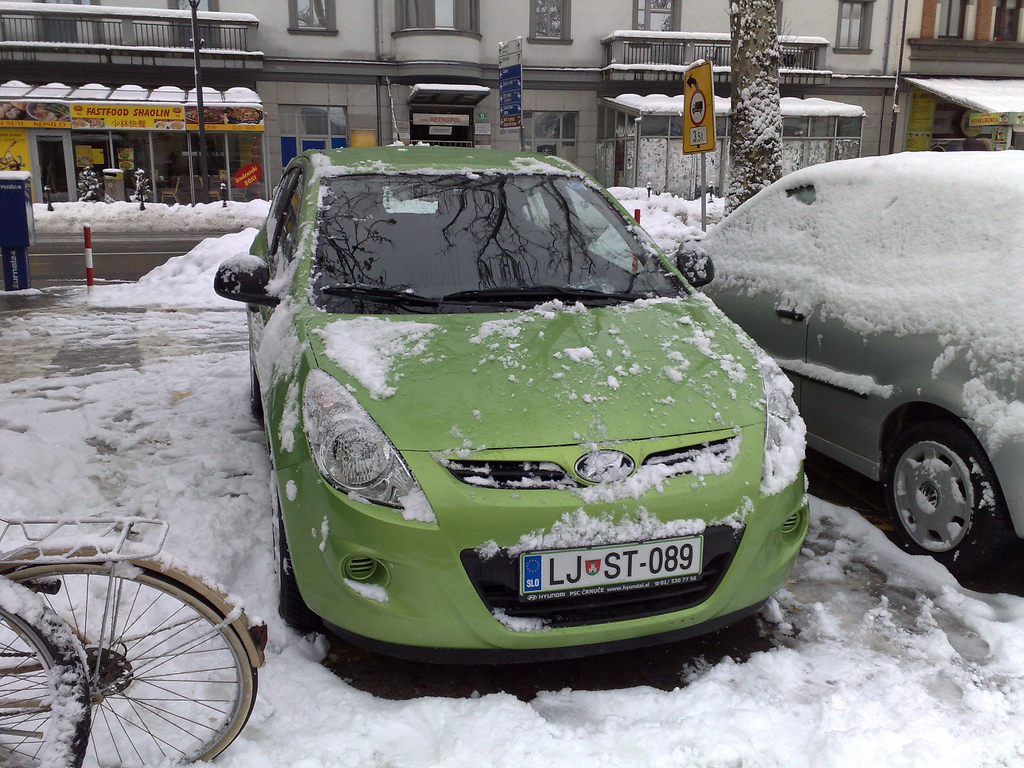 In 2004 my father and I visited my grandfather’s half-sister Manda and her husband at their farm in Dišnik, about an hour east of Zagreb. We planned to return on this trip, and it was only through a last-minute email from a Peruvian cousin that we learned that her husband had since died and she’s moved into a nursing home in nearby Marino Selo. Which is where we found her late one sunny afternoon. We had a good visit, although the language barrier – nobody in the place, including Manda, spoke and English and we no Croatian. As it turns out there’s a Canadian connection to the nursing home: it was funded, in part, by Kroum and Eva Pindoff, Canadians who founded the old Music World record store chain. 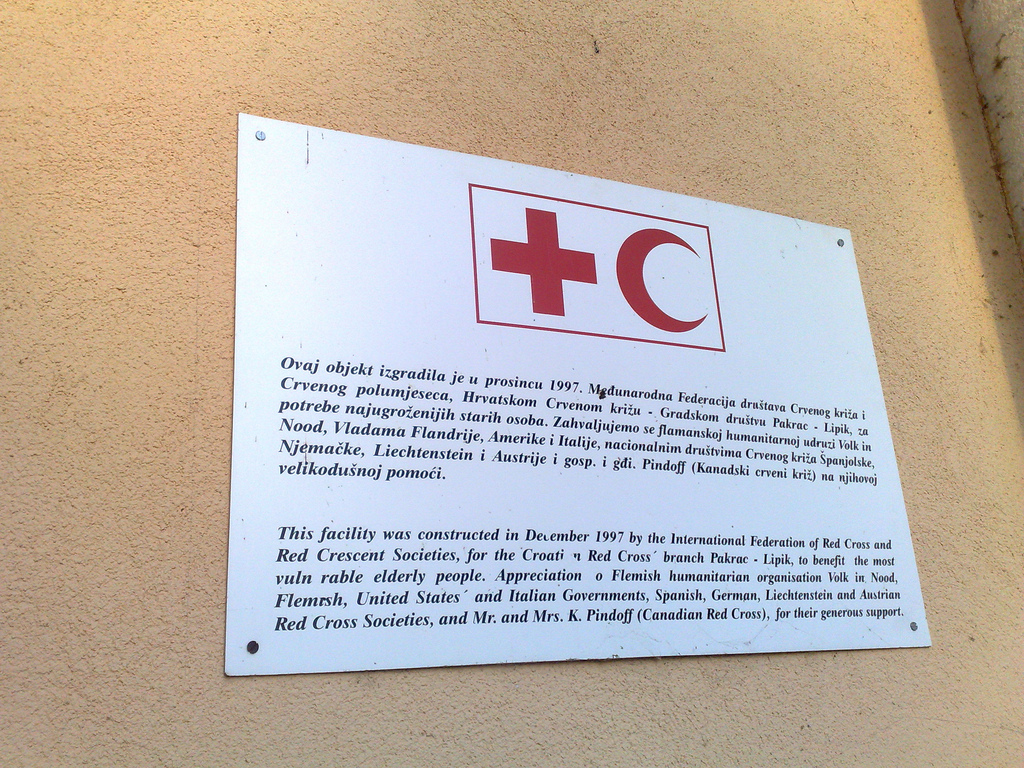 At the history museum in Gospić – a town in central Croatia near where my grandfather was born – we found this engraving of Barun Ivan Rukavina from 1849. 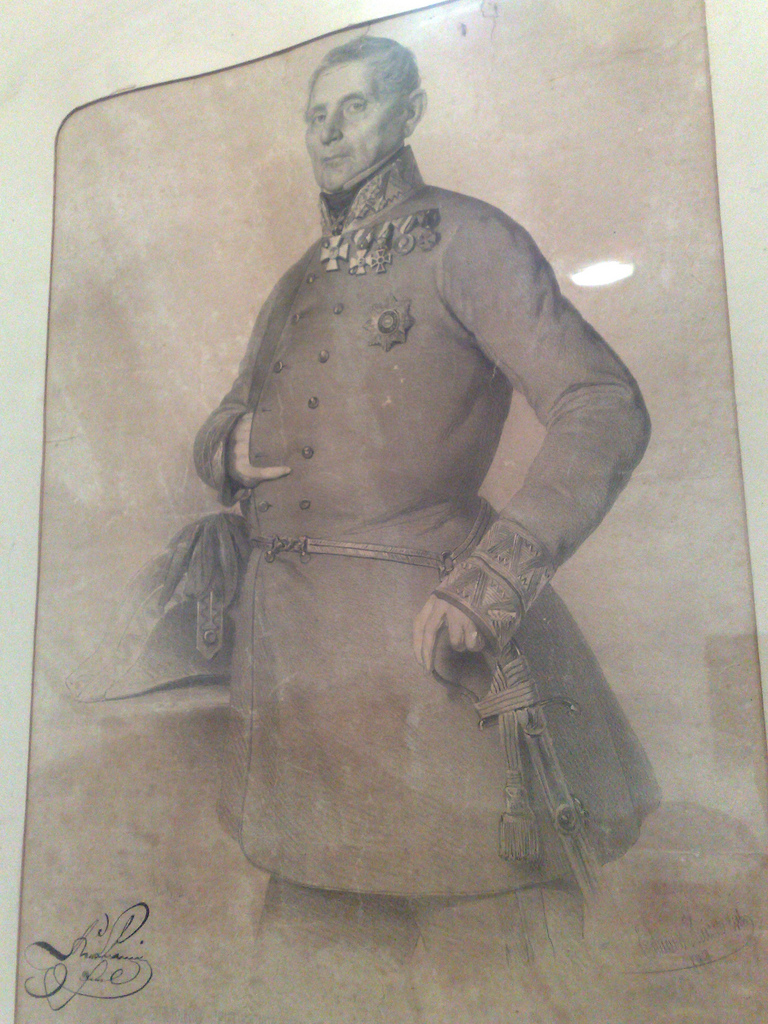 In Perušić, just up the road from Gospić and near Konjsko Brdo, my grandfather’s birthplace, is the Turska Kula, an old, old tower, high the hill overlooking the village, made of stone. We drove as close as we could and I ventured up the last bit alone, on foot, to capture the view. Here’s the Catholic church that holds the records of my grandfather and his family: 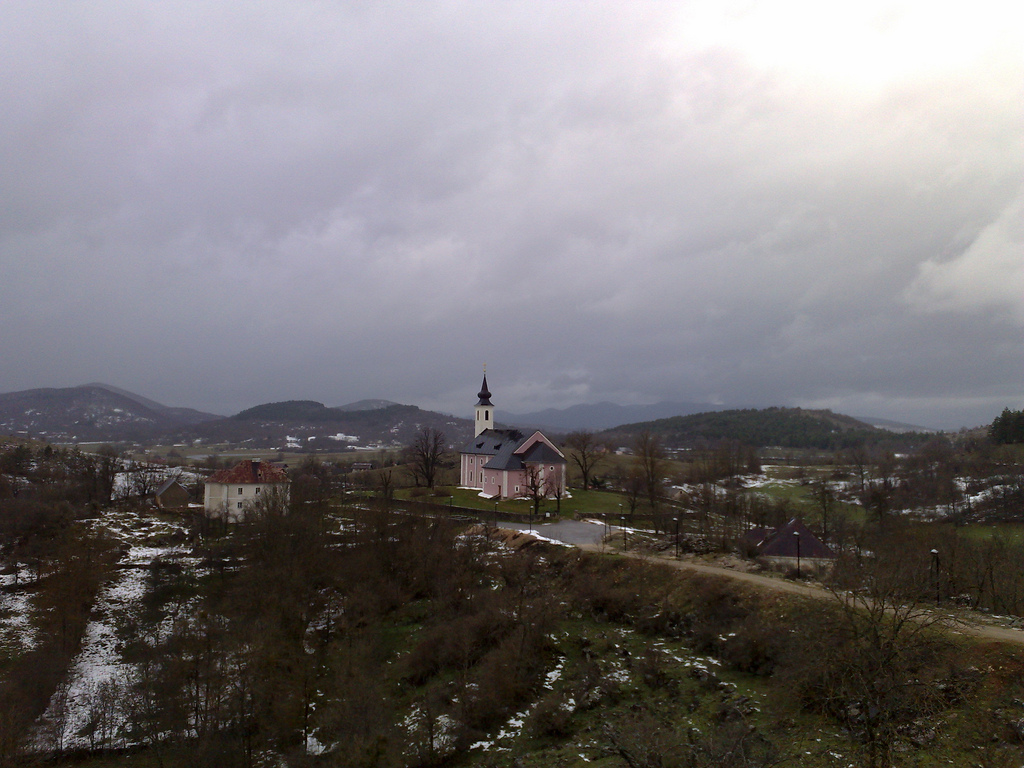 We had another morning in Ljubljana on our way back to Munich, after dropping off our car and before catching the train, so we took the funicular from the heart of old Ljubljana to the castle. Leaving Catherine-of-bad-knee down below visiting the museum, Oliver and I climbed the spiral staircase to the very top of the tallest tower in the castle and were rewarded the a commanding view of the city. 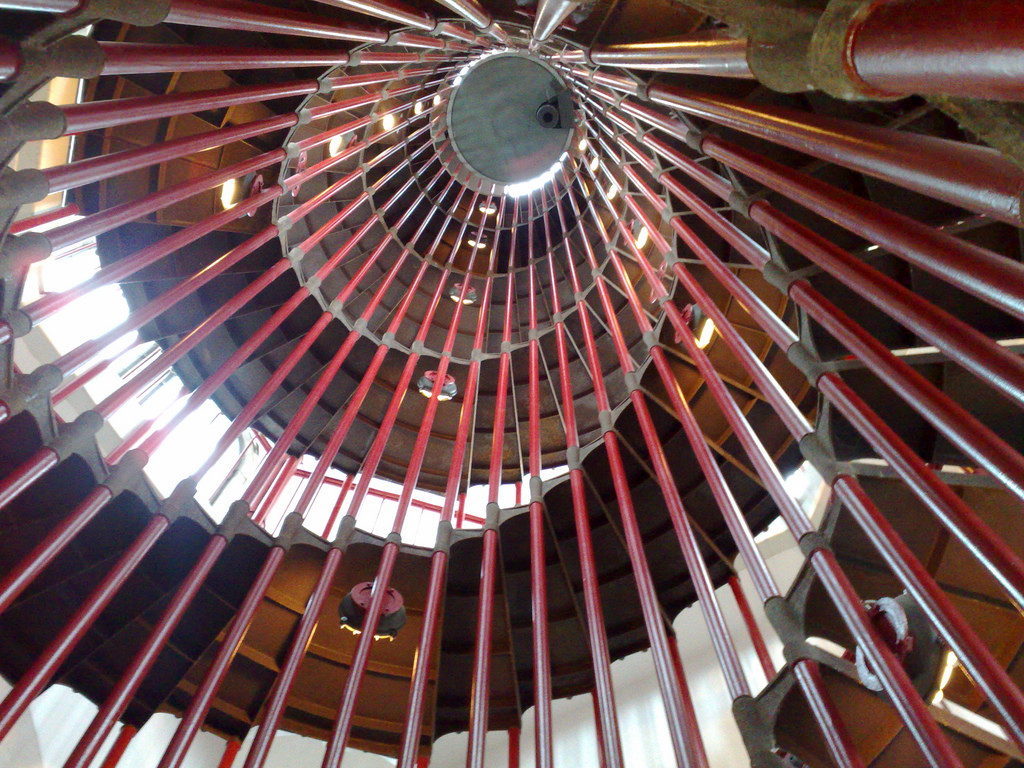 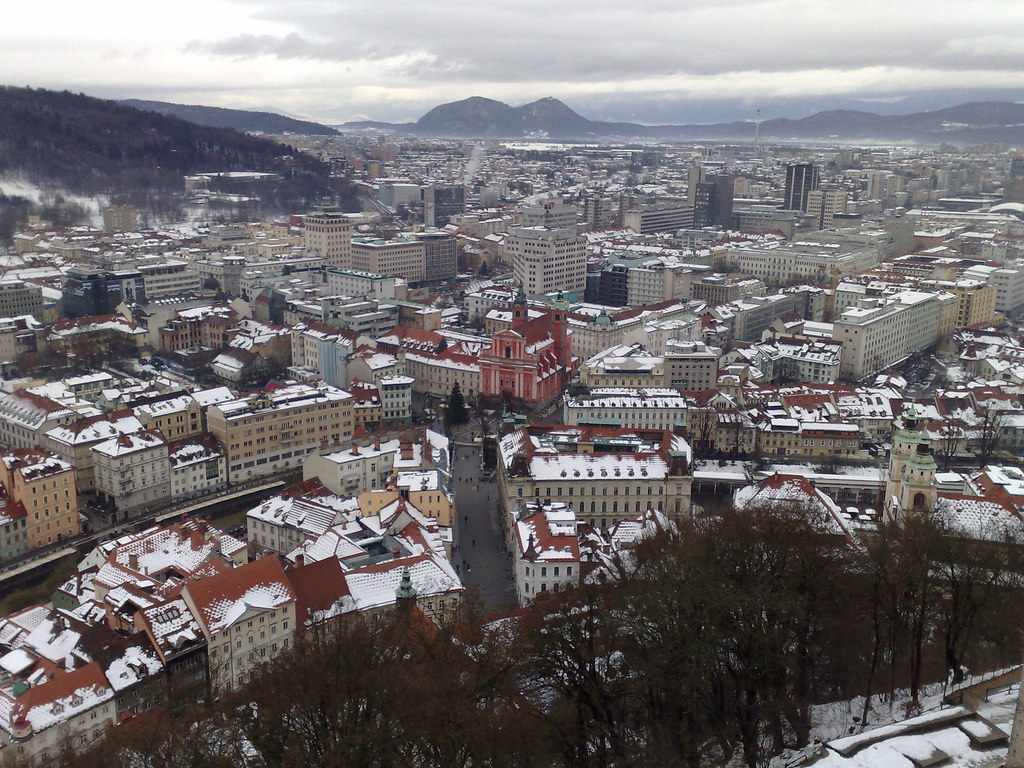 The Deutsches Museum is the grandaddy of old-school science and technology museums; a sort of anti-Phaeno, filled with helicopters and printing presses and models of the universe. It’s wonderful in its own antediluvian way. We arrived, by chance, on a day when it was open only half a day, so we had to rush through in 3 hours, but paid no admission. For me there were two highlights: first, the cross-section of a Lufthansa jet, showing the seats, the luggage, the wings, the engines, and everything else in a way I’d never seen before: 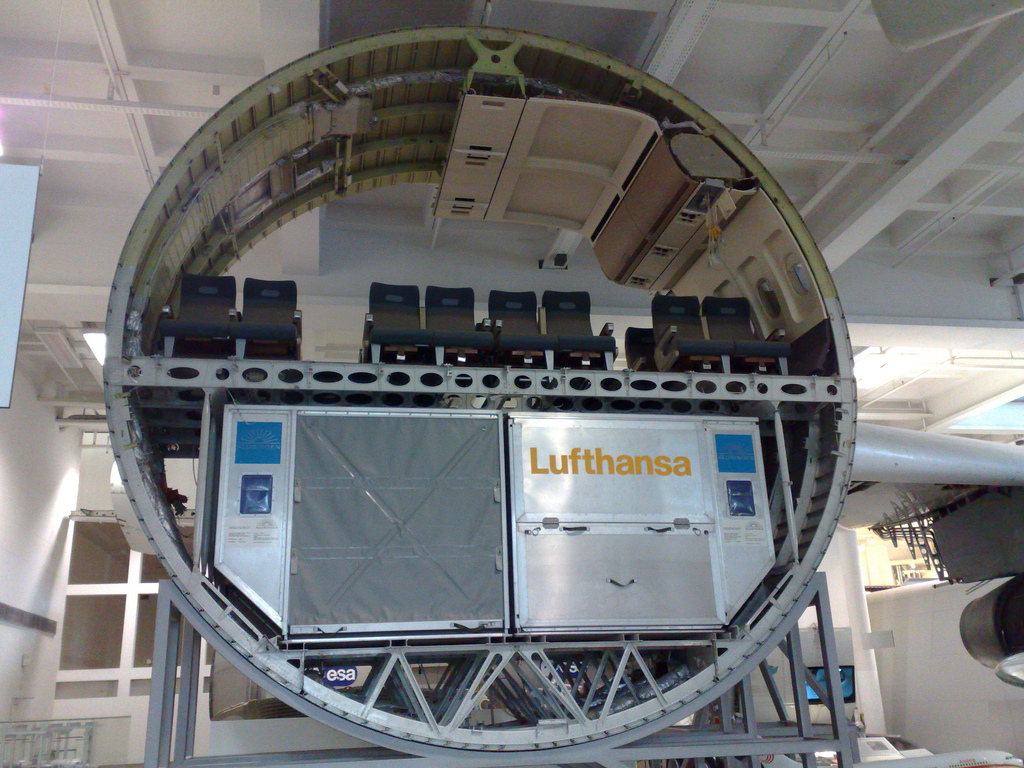 The other highlight was in the technology section: a demonstration of how machines can distinguish different denominations of change where you could put in different coins and see the count happening before you. It was “guts exposed” science museumology at its best: 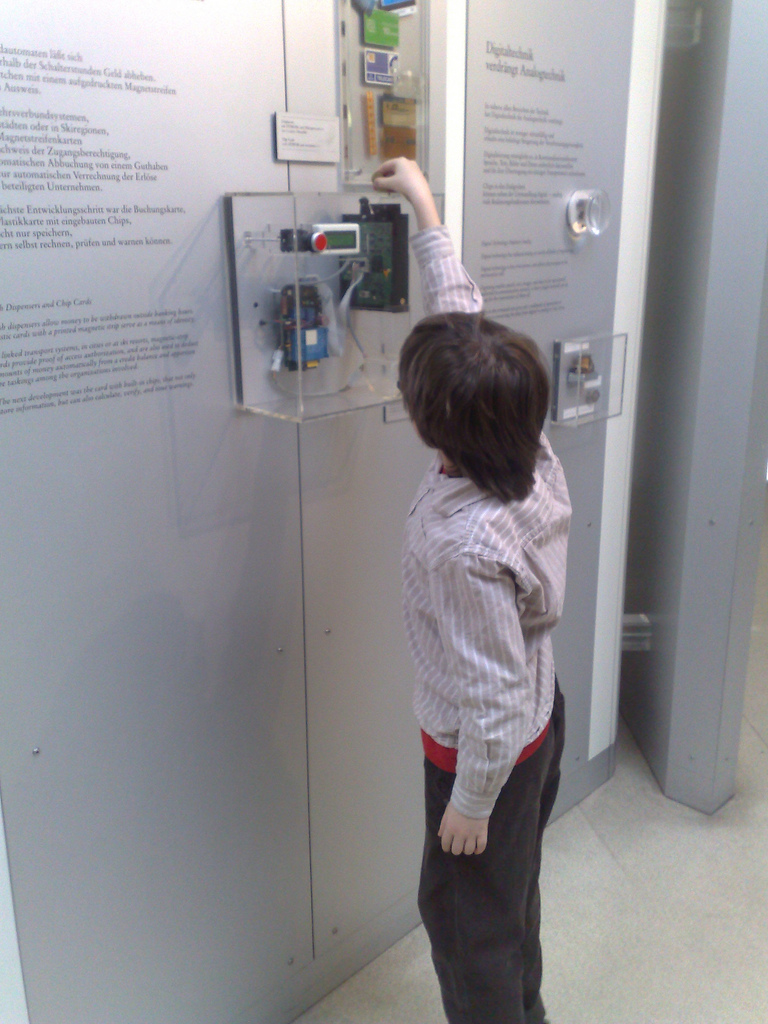 The last day of our trip, after leaving the Deutsches Museum, Oliver and I set off for a father-and-son lunch. Oliver was set on having sushi in Munich, and this was our last chance. Fortunately we found Sushi Sano nearby, a tiny sushi-and-noodles place with enough seats for about a dozen. All the seats were filled, so we took our sushi standing up. It was a great lunch. 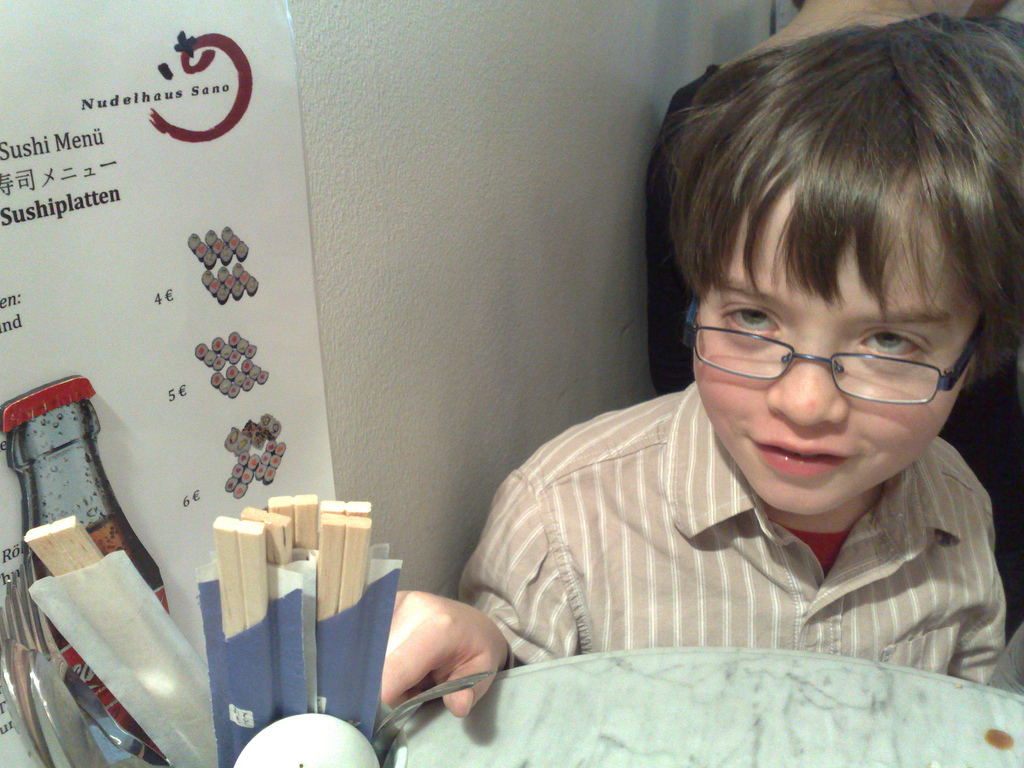 I can see the Baron in you Peter